James Kingston, is a British freerunner and film stuntman, who visited Bengaluru earlier this month. On his Facebook page, Kingston describes himself as a person ‘constantly looking for adventure.’ This professional adventurer, travels around the world in search of new heights to scale. Once he is atop a building or a bridge, he shoots a video of the view around him. His adventures have led him to hang off the top of a 250 feet crane in Southhampton, leap from rooftop to rooftop around Cambridge and do a backflip off the 115 metre tall, Moscow bridge.

He visited Bangalore to shoot a view of the city, that is as unique, as it is dramatic. 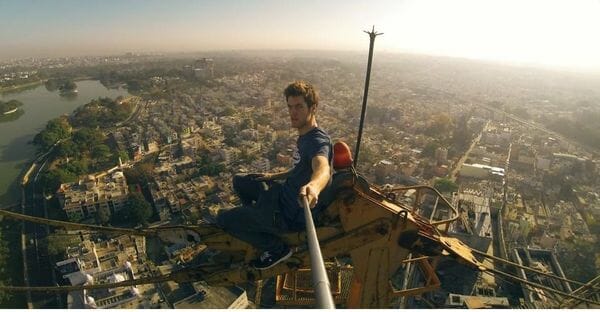 James Kingston takes a selfie with a view of Ulsoor Lake and the Halasuru area in the background from the top of a crane. Try spotting the Metro line on the far right. Pic: twitter.com/JamesLKingston

The shoot took place at an under-construction building on Kensingston Road, near Trinity Circle. He accessed the construction site via wall jumps and proceeded to scale a crane. He then gingerly walked along a strip of metal that was less than one foot wide, till he reached the top most point of the crane. From there, he did a one-handed dangle over the city, with the traffic bustling below.

The outcome of his climb is this spectacular video, that shows a panoramic view of namma Bengaluru, several hundred feet off the ground.

Kingston’s taste for daredevilry began in 2004, when he felt he was unable to attain his creative potential through the constraints of an oppressive educational system that pushed him to academically achieve. His positive attitude towards life is obvious from his work. Since then,

In an interview with The Telegraph, Kingston said, “For 99 per cent of the population, hanging off a building would be dangerous, but I’m skilled at it. And I’m very safety conscious. You either do it right or you don’t do it at all.”

Author’s note: James Kingston is a professional and has had years of practice. What he has tried is a dangerous stunt. Citizen Matters does not promote it or endorse anyone trying the same.

Tagore’s 150th birth anniversary and Association for the Mentally Challenged’s golden jubilee was celebrated with seven stories performed on stage. It was an enjoyable evening.

There are real people behind these masks

Vignettes from the Bangalore Pride Parade held on 28th June 2009.

Beyond the Land of Hattamala

A new theatre group’s debut production, Badal Sircar’s Beyond the Land of Hattamala.