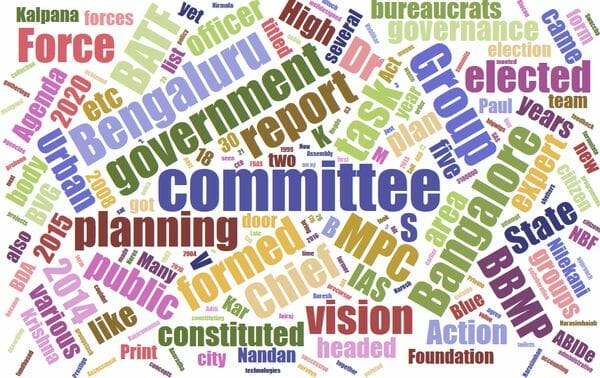 We have seen many vision groups earlier. Now it’s time for an action group! While the Assembly election is just two years away, the State government has constituted Bengaluru Blue Print Action Group (BBPAG).

Here is a quick look into the various vision groups/task forces that were formed in the past, why were they formed, what have they achieved and couldn’t. Also is the list of bigwigs who have made it to more than two groups.

Bangalore Agenda Task Force (BATF) was formed in 1999, when S M Krishna was the Chief Minister. It was a precursor to several other task forces that were formed by successive governments. It was headed by former CEO of Infosys Nandan Nilekani. Some of the members of the Task Force were IAS officer Jairaj (member secretary), Dr Rajaramanna, Dr Samuel Paul, Naresh Narasimhan, Kalpana Kar, Ramesh Ramanathan, V Ravichandar, Suresh Heblikar, Anuradha Hegde and Late Dr H Narasimhaiah.

BATF was, according to Nandan Nilekani, meant to be an attempt at Public Private Partnership, where a set of people from outside the government can bring in some value to the governance. This was meant to be pro-bono, and a collaboration of citizens, corporates and the administrative agencies.

During the first year, BATF members sat together to agree on an approach and formulate projects and programmes. BATF designed a feedback system, by means of citizen surveys, which pointed to the team on what to act upon next. They also conducted five public gatherings called Bangalore summits.

During its five year term, some of the concepts mooted by BATF like well-designed bus shelters, Nirmala Bangalore (construction of hi-tech public toilets), Swaccha Bangalore (door to door waste collection system), no-bin policy, Self Assessment Tax system, fund-based accounting system (FBAS) etc got implemented, and some of them became a hit with people, like SAS.

Many corporates like Biocon, Aditi technologies, Infosys foundation, Prestige Developers etc worked to create infrastructure, for the tasks underlined by BATF. BATF ceased to exist, with the end of S M Krishna’s rule in 2004.

The Expert Committee came into existence in 2008, when B S Yeddyurappa was the Chief Minister. The Committee was headed by Member of Planning Commision Dr K Kasturirangan. The Committee with expert members such as Dr A Ravindra, K C Sivaramakrishnan, Dr Samuel Paul and Dr Sadagopan, was constituted with an intention to put a new framework for Bangalore’s governance.

The team submitted a comprehensive 176 page report, in September 2008, titled “Governance in the Bangalore Metropolitan Region and BBMP.” The report had emphasised on the formation of Metropolitan Planning Committee (MPC) without further delay, as per the Constitutional mandate. However, it was only after six years of Kasturirangan Committee submitted its report, that the State government formed MPC.

The Committee had even chalked out a plan for how the MPC should be. It had recommended that the MPC have 63 members of which 42 are elected and 21 are nominated. Apart from the elected representatives who will be elected for MPC, the Kasturirangan Committee had batted for the nomination of relevant stakeholders and experts who have been the backbone of Bengaluru’s development in the recent years. However, in 2014, the government formed MPC with 30 members who are elected representatives and bureaucrats, with greater representation to BBMP area, while BDA area got some representation.

This task force was constituted in 2010, when B S Yeddyurappa was the Chief Minister. If BATF was funded by Infosys, ABIDe was funded and supported by Namma Bengaluru Foundation (NBF). Though the Committee was chaired by the Chief Minister, the activities were planned by MP Rajeev Chandrasekhar who funds the NBF.

The Task Force was given the responsibility of identifying issues plaguing Bengaluru and propose solutions. The group comprised of elected representatives, bureaucrats, high-profile individuals and urban experts in equal measure. Some of the members of the Task Force were, Kiran Mazumdar Shaw, T V Mohandas Pai, R K Mishra, Ashwin Mahesh and Dr Devi Shetty.

They came up with a project report for the city titled “Plan Bengaluru 2020,” for urban reforms. The report gave a to-do list for various segments like governance, lakes and environment, health, education, roads, economy, housing, tourism etc.

Some of the recommendations of the Task Force include, create a new legislation for Bengaluru that supersedes/encompasses all Bengaluru/Municipal body legislations, study and research the transport demand growth, prioritise high mobility pathways, make the outer ring road signal-free, establish Bengaluru Heritage Commission, restore all lakes and water bodies etc.

This group was formed when Jagadish Shettar was the Chief Minister. KIG submitted a report, “KIG 2020” to the Chief Minister in January 2013. It laid down key-initiatives for Karnataka’s roadmap to global leadership by 2020. The report expected Karnataka to earn a total revenue of Rs 3,180,000 crore from IT/BPO and ESDM industries.

Co-founder of Janaagraha, Ramesh Ramanathan was the Executive Chairman of the Group and Kalpana Kar, Narendra Pani, Ruth Manorama and Lakshminarayan of Bosch were its members. The recommendations of the Vision Group was supposed to be implemented by a Committee headed by Additional Chief Secretary.

However, soon after the Group was formed, a petition was filed in the High Court calling the government’s action in forming the Group was “extra-constitutional.” The petitioner had contended that the Vision Group overlaps with and invalidates the powers and functions of Metropolitan Planning Committee. After hearing both the sides, the High Court disposed of the case, asking the government to form MPC.

Bangalore Metropolitan Planning Committee was formed in 2014 after a lot of dilly-dallying. The previous governments which had shown excess enthusiasm in forming independent committees and vision groups, did not show the same interest to form the constitutional body called MPC.

The Constitution (74th) Amendment Act, 1992 has mandated the formation of a planning authority for each metropolitan area. The MPC is vested with the responsibility to prepare a  draft development plan for the entire metropolitan area.

Though the State government notified Bangalore Metropolitan Planning Committee Rules in January 2014, the Committee came into existence months later, in September, only after the High Court’s intervention.

The Committee has 30 members of which 18 are BBMP corporators, 2 elected members from ZP, TP and GPs, the CM, Minister for Urban Development, UDD Principal Secretary, one Member of Parliament and the Commissioners of BBMP, BDA, BWSSB and BMRDA, Director of Town and Country Planning and Secretary of the Finance Department. So, this committee is full of elected representatives and bureaucrats with no space for citizen representatives.

The Committee, much to its discredit, has not met even once since its inception! The Chief Minister who chairs the Committee has not called for any meetings. The 18 member body was dissolved few months backs and a fresh election was conducted in February 2016.

Amid all this, the government ventured into yet another task of re-organising Bengaluru. For this purpose, it constituted a Committee in September 2014. Retired IAS officer B S Patil was the chairman of the Committee, retired IAS officer Siddaiah, urban expert V Ravichandar and IAS officer P Manivannan were the members.

The Committee was supposed to prepare a report on restructuring Bengaluru into 3, 5 or more corporations. After convening several public meetings and consultations, the committee submitted its final report to the Chief Minister in June 2015. In its report, the Committee recommended that BBMP be split into five corporations, with 400 wards.

The State government passed a legislation to restructure the BBMP, but the Bill is yet to receive the President’s assent. To get the Presidential assent, Union Urban Development Ministry and Law Ministry should give a favourable opinion.

While the BBMP restructuring committee exercise was going on, Janagraha Center for Citizenship and Democracy conducted an exercise in 2015, by inviting public views and expert views on city planning and implementation goals. The demonstration of the same was presented to various officials related to Bengaluru, in a seminar organised on December 26, 2015.

In this background, the government issued a notification ordering the constitution of Bengaluru Blue Print Action Group (BBPAG), on April 28.

Flooded roads and broken sidewalks in the Manhattan of Bangalore

How are broken roads fixed in Bangalore? According to a citizen’s report from Yeshwanthpur, with packed mud and stones.