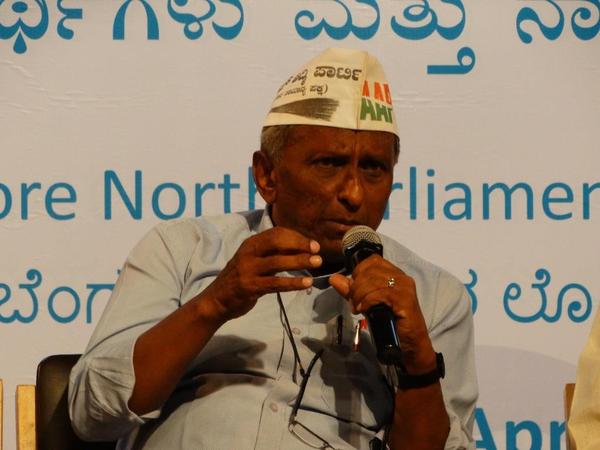 In a telephonic interview with Citizen Matters, Aam Aadmi Party candidate from Bengaluru North, Babu Mathew, reveals his plans for future. Here are the excerpts from the interview which summarise his policies and plans for his constituency, interaction with voters etc.

AAP is known to have deserted Delhi. Why should people vote for AAP in this elections? Won’t voting for AAP lead to a hung parliament?

AAP is the first step towards the second freedom movement in India.

How does your party plan to control corruption?

AAP is determined to see the passage of the Jan Lokpal bill. My party will also press for the creation of fast track courts for the trial of those who indulge in corruption with mandatory imprisonment. Also, their disproportionate assets will be swiftly disposed off in a public auction and the funds obtained will be utilised for the benefit of the public in a transparent and systematic manner.

How does your party plan to control corporate corruption if it comes to power?

Every corruption will be treated on the same basis – whether it has something to do with a corporator or a corporate. We haven’t had any problems taking the Ambanis to task and we won’t for any other corporate too.

Why should people vote for you – Babu Mathew, as an individual?

I’m associated with a truly transparent, committed party offering realistic, people-centric alternatives. I have been a grassroots social activist who knows the real issues.

What according to you are the issues concerning Bangalore North?

Many problems are not specific to North but the entire city. Economic activity is concentrated disparately, because of uneven development of Bangalore and the rest of Karnataka. Corruption denies social entitlements. Bangalore must be reclaimed by its citizens by busting land, water and garbage mafia that cuts across both BJP and INC.

Any planning must abolish socio-economic differences between urban and rural areas and promote equitable development. This should be nationwide.

In North bangalore, 61 lakes were destroyed with sewage flowing into them. Drinking and sewer water are mixing and breeding harmful E.Coli. Areas like Devarajeevanahalli have minimal roads, schools or government medical centres, poor sewer drains, with almost the entire local population being very socio-economically marginalised.

What’s your view on your main opponents? DV Sadananda Gowda is perceived to be better of the lot among BJP candidates. Narayana Swamy too doesn’t have any skeletons in his cupboard.

Perhaps. But, an honest person cannot function in a corrupt party.

What’s your view on free water for Bangalore’s citizens? Is it viable here? What about free electricity?

I have promised neither of them.

Mainly contributions from individuals. All information is on my Facebook page. In my party, we’ve decided to voluntarily disclose all donations. No law stipulates that we declare names of donors and amounts below Rs.20,000/- but we are publishing those details too.

What would be your priority sector while spending MPLAD money if you are elected?

My party prefers to abolish MPLAD funds and redirect them to mohalla sabhas (ward committees) so that people receive the money and decide how and when to spend it.

What is your view on illegal high rises coming up near Jakkur area, violating the aviation safety rules in place, even as BBMP turns a blind eye? Will you be supporting the investors, or the law of the land?

As a matter of principle, I believe that people should not be displaced as a result of technical violations on the part of the builder or any other party. However, if it involves the reclamation of land that is the property of the common people, eg.lakes, then action must be taken, so long as alternate accommodation is arranged for those who have been displaced.

If you get elected, will you be discussing with your voters the spending of your MPLAD money? What is your strategy for this? So far no MP has had any strategy on this, and the money ultimately went waste.

I think the money should go to the Mohalla committees. However, in case that is not in place, it will be through means of a participatory process. The MPLAD fund will be allocated after discussion with citizens – there must be democratic participation. The work that we do, the money that we spend and the progress of the work will be transparent and will be put up on our website. Audits will be conducted.

How will you keep your interaction on with the voters alive once elected?

This will happen through interaction with the Mohalla committees. Irrespective of the results of the elections, we will continue this interaction, so that we ensure that at the corporation elections we identify uncorrupt, clean candidates who can be corporators.

Will the salary you get as an MP enough for you to run your family as well as do your duties as an MP? How will you manage?

Of course! I have worked hard all my life. My wife is a professor of gynaecological oncology. We live frugally and this will be more than sufficient.

What do you think should be done to stop the flow of black money in society?

We are proving it through the course of the elections – we are doing our campaign without any black money. While we are allowed to spend up to 70 lakh for the campaign, we are making do with less than half that amount. We will put up the details of our spending in two to three days on our website.

Not at all! It’s sad that we have been conditioned to think that there is too much corruption in the system, and therefore we cannot be idealistic and hope for change. We will fight tooth and nail against corruption. Leadership will have to play an important role in doing so. And there are people who believe in this. Take the AAP volunteers for instance – they are working free of cost; some of them even at the cost of losing their jobs.

What do you have to say about your campaign?

This has been a fantastic campaign. When I go into the homes of poor people, the women start by attacking me. Seeing how it has been the past couple of years, they are sure that we are there only for votes, and that we will not show up after the elections. After spending 20 minutes with them, they themselves say that they will vote for us.

Are you here in politics to stay? Will you be active in case if you lose?

I will continue in politics whatever the result. Our next objective is to contest urban and rural local body elections.

Bangalore South has poor and rich candidates. What’s interesting about the affidavits of these candidates?

Voter roll revision for 2020: How to enrol, verify or update your details

This Lok Sabha election, thousands of Bengalureans couldn’t vote due to errors in the electoral rolls. The Election Commission is now holding a drive to update the roll and enlist new voters. Here’s a guide on the process

More people voted in this election than in 2006. But the voters’ woes were the same as in any election. Confusion ruled the day.