The Bangalore Political Action Committee (BPAC) has launched a new initiative to improve the quality of BBMP corporators, by identifying capable individuals interested in contesting BBMP elections, and train and support their joining public service.

Christened B.CLIP (BPAC Civic Leadership Incubator Program), it is designed to equip candidates with skills in public policy analysis, municipal administration, political landscape and election campaign dynamics. The project is expected to throw up candidates that BPAC and other civil society organisations can endorse for the future Bruhat Bangalore Mahanagara Palike (BBMP) elections. 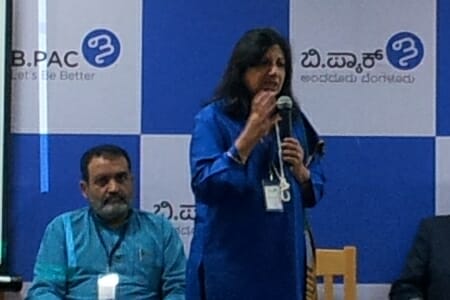 Explaining the concept of the programme at a press conference on September 20, 2013, Kiran Mazumdar Shaw, Founder trustee and President, BPAC said citizens should demand performance and accountability from councillors. This programme is a way to raise the bar for elected reps. However she also cautioned that it is for the long haul, and one cannot expect results in 6 months or 1 year.

She also shared that the programme is supported by experts in the political and governance space including Rajeev Gowda, Ashwin Mahesh, R K Mishra, Tara Anuradha, Shobha Karandlaje, Suresh Kumar and others.

Mohandas Pai, BPAC vice-president, pointed out that unlike Mumbai and Kolkata, New Delhi is improving because it became a state and citizens have more power. He rued that citizens don’t rule Bangalore and they are frustrated with the garbage, debris, sewage and potholes.

Though the city government is the most important rung of government that is  in control of day-to-day issues, it is controlled by contractors and corrupt real estate brokers. Pai said the programme will create leaders – who can stand up for citizens in the Council.

BPAC is spending around a crore of rupees for the B.CLIP programme. Participants will attend classroom sessions on concepts and practice of governance topics like public policy, structure of government, economics, ethics etc. coordinated by Takshashila, followed by field work for 6 months, working in a ward with citizens and resolving specific ward level issues. The selected candidates will be given a stipend.

The selection process has started; the last date of application is October 20th. Two batches of training starts Nov 2013 and March 2014.

How are the candidates selected?

BPAC website says that those who apply for the incubator programme:

Anyone meeting the required criteria can apply. Women candidates are encouraged to apply. Existing corporators can also try, but the decision of the Selection Committee will be final.

BPAC has been active in supporting voter registration efforts, endorsing and supporting select candidates during the 2013 MLA elections, and pushing for better waste management. They are now also taking up two new activities – improving Cubbon Park and a programme called B.Safe to make the city safer for women.

Kiran Shaw shared that BPAC is installing information panels in BBMP offices that contain the list officials and their responsibilities. She said, “though much requires to be done, I am hopeful Bangalore can be the best city in the country.”

Can we make Bangalore better?
Bangalore must become an inclusive city

A coalition against GM food crops has planned a citizens’ awareness and call-to-action campaign to be launched on October 2.

In-council elections for Bangalore’s mayor and deputy mayor were held on April 29th. The ruling party had already reached a consensus and proceedings were smooth.