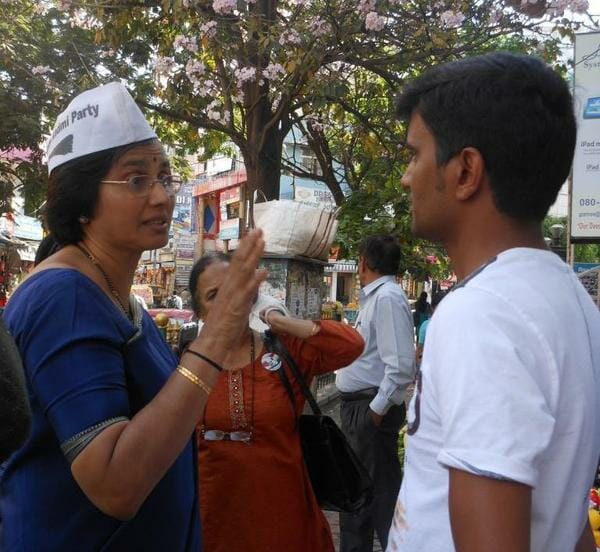 There were no drum beats, there was no hailing of party slogans, there was no huge backing of crowd to attract the attention. The Aam Aadmi Party caps did the trick. Along with a few dedicated volunteers, Nina P Nayak, Bangalore South AAP Candidate, was seen campaigning on the streets of Gandhi Bazar.

At 60 years, Nina P Nayak, adorned in dark blue sari with think gold border, a purse on her right shoulder and the Aam Aadmi Party’s trademark cap on her head, randomly spoke to people as she walked on the footpath occupied by street vendors.

While talking in broken Kannada, she gleefully accepted her nervousness on contesting elections and her lack of knowledge on how to campaign. She explained about her experience in fighting for child’s rights.

Some gaver her best wishes while others took the opportunity to tell her their problems. Manjunath who sells soft toys on footpath complained to Nina about the lack of social security and medical benefits for people from the unorganised sectors. He said, “There is no respect for people who work as waiters in the hotels or who drive autorickshaw. I haven’t seen any politician who is bothered about them. None of them has social security or medical benefits.”

Understanding crux of the issue, Nina said, “It is the biggest problem and highly ignored area.”As she spoke to him, other volunteers distributed pamphlets and asked them to vote for AAP. A man came forward with Rs.10 and said, “I want to donate to your party.” Appreciating his kindness, volunteers rushed to bring their receipt book.

She advocated bringing swaraj and self-governance back into the system, where power is with people. She said, “People should be motivated to participate in governance from the lowest level, which is not happening. Today those who get elected, want to shut public’s mouth. How will a common man’s voice be heard then? I am telling you from my own experience after working in the child rights sector. I have seen how to get our voices heard. This requires doing a lot of in-depth study into policy, program and laws. Only then one will get an idea or an insight as to where is the problem.”

She said, “I am very familiar with the working of the government as I have worked in the child rights sector. I have monitored a number of programs and have seen a lot of corruption. Therefore I am very clear, that unless we get rid of corruption we will not get opportunity for our people to develop.” “We want a corruption free India. It is the ultimate goal!” she added.

Citing some of her experience from the past while working with the government she pointed that child rights violation and irregularities in NREG scheme are haunting the poor citizens of India.

Talking about Integrated Child Development Scheme, (ICDS) she said, “In spite of government schemes which provides supplementary nutrition, 68,000 children in Karnataka are severely malnourished, all because of poor governance and lack of implementation.” She ended saying that, “Even when planning commission allots funds, government under-utilises the fund.”

Nina’s next stop was in front of a hotel in Basavanagudi. Sowmya, a young volunteer told people in Kannada:  “We have seen what politicians have done for the last 65 years. Now we want non- political people to enter government. Read Nina’s profile and you will know why you should vote for her.” Volunteers kept distributing the pamphlets.

Sitaram Sakleshpur Gundappa, who just returned from Iraq and is now a full-time volunteer for AAP, said, “We have not entered government to play politics but with the spirit of patriotism. We want your support for people like madam Nina…”

When Citizen Matters asked Sitaram why does he support AAP, he said, “Why not AAP?“ It is Aam Aadmi Party and I am a common man myself. I want to see corruption-free society where there is communal harmony, where people will be able to live without any problem. We are inspired by the ideals of Arvind Kejriwal.”

Talking about his support for Nina, he said, “I don’t know her personally but she has lot of experience in the child welfare and administrative work. Since AAP has chosen her, we would like to support her. I would support any candidate that comes from AAP,” he concluded.

After marching in Gandhi Bazaar, her team headed towards M N Krishna Rao Park to meet with more people.

Call these numbers for auto problems, but call before 6pm

You can call one of RTO’s eight zonal numbers if an auto rickshaw driver is causing a problem for you. An inspector will be sent to the spot. This is a trial for the next two weeks.

School children talked to residents in the Doddanekundi area on waste segregation and performed a street play to raise awareness on cleanliness.