Atul Chitnis was a technologist, open source evangelist and organiser of FOSS.in. For more, check Wikipedia or even better, his own description. Here are some memories by those who knew him, those who were close to him, reflecting on his different facets.

I have known Atul Chitnis for over 15 to 17 years. Though our acquaintance happened because of his messianic zeal for getting Indian IT going in the way that benefitted users, I am not going to dwell on his credentials as an open source guru; others are more qualified to so. 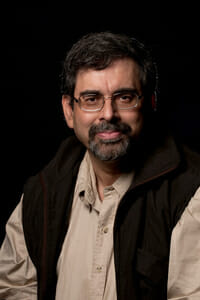 Soon after we met, Atul and my late husband Allen were plotting stories regularly , sometimes I tapped Atul for information. Atul shared Allen’s love for music, and with his wife Shubha spent many happy and fun moments with us. The families bonded as we each had a child of the same age.

Anniversaries, birthdays… I remember one year Atul surprised Shubha with the title deed of their house.

In retrospect it seems like those were some of the best years of our lives. Intelligent conversation, heated arguments, good food and music, who could ask for anything more? (See  Atul’s note on an evening of music here: http://atulchitnis.net/2002/6-hours-guitar-non-stop)

Over the years, as careers became more demanding, the socialising was curtailed, but never the warmth. I followed Atul’s gutsy and frank posts on Facebook about his ailment, the treatment and smiled at his sheer joy of enjoying a power packed breakfast.

I didn’t cry when I got the news of his passing – though his life might seem short in years, what he achieved has been impressive. I think he met every goal he set for himself. That’s his legacy.

I think I hear him with Allen playing their guitars and singing for me in their husky baritones.

If you have worked with computers in its early days in India, you will have a half smile as you read about a college student Chitnis interfaced a Casio device with a Telefunken tape recorder and wrote programs. Arun Chitnis, Atul’s brother, writes about his early childhood, and his move into working with computers, much against his authoritative father’s wishes. http://arun.chitnis.com/2013/06/08/my-brother-atul-chitnis-1962-2013
Kiran Jonnalagadda writes about the how Atul was way before his times. Kiran shares Atul was a good programmer who preferred Borland Pascal! (Remember that?!).

Atul was part of Bangalore Linux User Group and the Linux Bangalore and FOSS.in conferences eventually grew out of these early interactions.
http://www.nextbigwhat.com/atul-chitnis-obituary-297/

Gaurav Vaz, the musician and a co-founder of Radio Verve, shares another side of Atul. Atul was the one who helped the Radio Verve team set up their 24×7 streaming infrastructure. http://gauravvaz.com/shine-on-you-crazy-diamond/

Raghu Dixit’s performance had listeners up on their feet and most of them up on their chairs.