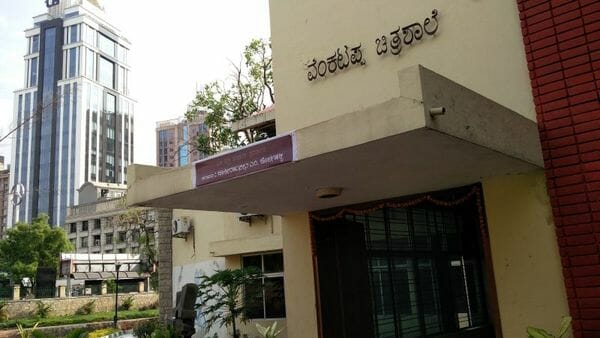 Some people are a little confused why Karnataka artists are against the adoption of the state Venkatappa Art Gallery (VAG) by Tasveer Foundation to build MAP – Museum of Art and Photography, to house Abhishek Poddar’s art collection. Artists have formed Vagforum (Venkatappa Art Gallery Forum) to oppose this move.

MAP in VAG is being projected as god’s gift to the Bengaluru’s public. Let me explain our stand:

Artists are not against the Museum of Art and Photography or MAP coming up in the city. But it should be housed on its own land. We would welcome it. We are against it being built on the land of the Venkatappa Art Gallery. We oppose any corporate house taking over our cultural commons. Why should Abhishek Poddar want the official state gallery to build MAP when he can rent or get any property or heritage site to house his collection? We will go to see it, have a coffee and salute him.

All major art collectors in India like Kiran Nadar of Kiran Nadar Museum of Art, Lekha and Anupam Poddar of Devi Art Foundation, Ebrahim Alkazi of the Alkazi Foundation for the Arts, Priti Paul of Apeejay Media Gallery to name some, have set up world class museums of their art collections on their own land. Abhishek Poddar should follow their example.

​The Case of a Benign PPP​

There is an example of a benign private-public partnership – PPP, in the case of the Bhau Daji Lad City Museum in Mumbai, the first of its kind. The Jamnalal Bajaj Trust is in a tripartite agreement with the Mumbai Municipality and INTACH. The trust gives generous funds for conservation, maintenance and running of the heritage museum. However, they will not occupy it, build a new building on it, put in their own collections, or get co-branding with it, as Tasveer Foundation plans to do with VAG. If Tasveer Foundation can fund VAG for its maintenance, conservation and activities, we welcome it. It will be philanthropy.

Why is Venkatappa Art Gallery important for artists?

The Venkatappa Art Gallery is the official Karnataka State Art Gallery. The building is on two acres of prime land in the Museum Complex at Cubbon Park in the centre of the city. It is not an empty shell. It houses the heritage collections of K Venkatappa, KK Hebbar and CP Rajaram donated by their families. There is an extra gallery space and auditorium and grounds which have been constantly used by the artists of the state since it was built in the 1970s. It is in good condition and needs some upkeep.

It is an inclusive and democratic space which can be hired cheaply by young artists and those from the provinces, and also excellent for non-commercial and experimental art projects, festivals, workshops, seminars, talks and meetings. Most of us here, like myself, have had our first solo shows in VAG. Through the years, there have been group shows, collective projects, 8 state Kala Melas, retrospective of RM Hadpad, The Khoj International Artists Residency, The International Live Art Festival, Co-Lab and Ananya Drishya artist talks, recently the IFA Public Art presentation, to name a few activities – open and free to all. Will MAP be able to do these things? Do we need an exclusive wine and cheese place here? We usually do kaphi and vad​e.

We have read the MoU, it’s not transparent

The MOU has been studied thoroughly by Vagforum with legal experts. The MOU is vague, flimsy and lacks scrutiny. Tasveer Foundation has written this in their own favour which has been signed by the govt. officials without any safeguards. MAP gets free rein to occupy and use the VAG space with no responsibilities.

The MOU was signed between the Tourism and Archeology Departments and Tasveer Foundation without consulting the art community. The secrecy is a sign of malafide intent. A cultural institution actually comes under Culture and not Tourism which is under the Industries Department — the Tourism Department had no business to sign the MOU.

Having studied the MoU, we find that there are many areas of conflict of interest. Abhishek Poddar, as a primary member of the Karnataka Tourism Vision Group which created this policy, identified VAG for adoption by himself. He is the Director of the non-profit Tasveer Foundation (strangely a shadow entity with no website or any info about trustees), and MAP (http://map-india.org), but also the owner of a commercial photography gallery Tasveer Art Gallery (http://www.tasveerarts.com), and the Cinnamon lifestyle store.

We wonder where the profit ends and the non- profit begins, and vice-versa? We have seen photographs shown and sold in Tasveer and Cinnamon. Photographers Raghu Rai and TS Satyan are two of 25 photographers which Tasveer Gallery represents- their works are also in the MAP collection. The same image by TS Satyan is shown in both websites. Nathaniel Gaskell, associate director of MAP (non-profit) who is working on the plan of the Museum, is also the curator of Tasveer Art Gallery (profit).

Lack of transparency and clarity

Poddar is being projected as a philanthropist. Is he building and donating the building of MAP and its collection to the state? The MOU does not say so. The MOU is for 5+5 years. It will take several years and several crores just to build the museum. Will he vacate the building after 10 years? And then where will the collection go? Is this a land grab in the guise of philanthropy? And what will happen to the heritage collections already existing in VAG during this building period? Will they be moved away to his art warehouse? The families are worried. In the MOU he does not take any responsibility for damages.

Where is Poddar’s social responsibility, his giving back to society? We have not seen Poddar in any art event in Bengaluru in the last twenty years which only shows his utter disdain. The city has a unique art scene run by artists, who have created on shoe string budgets huge public art projects, run international art residencies and collective art spaces. It is considered the avant garde art capital of India with artists experimenting in new materials and forms like installation art, new media, conceptual photography and live performance besides traditional forms like painting ands sculpture. But he has hardly supported art activity here or anywhere in the state. We are not glamour-struck by references to the Tate Gallery or MOMA, as many artists from the state have been exhibiting in the major museums of the world for the past twenty years.

Rangashankara model is not comparable!

This MAP project is erroneously being compared to the Rangashankara theatre. Rangashankara (www.rangashankara.org/ ) is not a PPP. Here, the Sanket Trust was set up by well-known practitioners, who got an empty plot of land from the government to build an auditorium, and raised funds for the purpose from the public and business houses. It is run on sponsorship. This was for the use and development of the theatre community, which is rented out cheaply to theatre groups with cheap ticketing for the public. But if the state had tried to give away Ravindra Kalakshetra, for example, to Sanket Trust to rebuild and occupy, the entire theatre world would have been up in arms.

The trustees of Rangashankara are Girish Karnad (playwright- Jnanpith award), Arundhati Nag, S. Surendranath, who are all experienced theatre practioners with S Parameshwarappa who is an administrator and theatre enthususiast. M S Sathyu (theatre director) is a consultant. There is a gravitas and a vision to this group.

​Business people, auctioneers, lobbyists on board of directors​ and trust​ – only one art expert

The Advisory panel of MAP consists of Dr Jyotindra Jain, scholar and institution builder whose expertise is in tribal, folk and popular art. Arundhati Ghosh of Indian Foundation of the Arts is an arts administrator and not an expert on visual art. For a Museum of Art and Photography, there is no expert or practitioner in Photography, or in Modern and Contemporary Art, in the list of trustees, board or advisors. Dr. Jain is the only expert from visual art. How serious is this museum which wants the status of an official state collection?

Cancel the MoU on VAG

Our protest against this MOU is against the backdrop of huge scams where government banks have given thousands of crores of bad loans to renegade business houses. Vijay Mallya, another Bangalore businessman (strangely not part of MAP) is only the tip of the iceberg. There are scores of such government scams. This is how governments drain their money and have nothing left for culture, and have to sell our institutions to corporate houses. Would anyone tell me how much the private sector has contributed to the development of the city and how much it has taken from our town?

There are efforts to divide and rule the artist community by pitting artist S G Vasudev against Vagforum. But S G Vasudev has clarified privately to us, and publicly in the press, that he is against the MOU and PPP with Tasveer Foundation. We are all united in opposing it.

Vagforum will not give up till the MoU is cancelled. We are getting support from other cultural fraternities and from all over India, as it is an issue that concerns the entire art world. We also wonder how MAP will come up at Venkatappa Art Gallery against the will and severe displeasure of the entire art community of Karnataka.

State has to run the gallery

We are fighting for the cultural commons and our public space. This is a wrong precedent being set by the government – where a public cultural institution is being given away carte blanche to a corporate house to occupy and rebuild. This has never before happened in India and is against public interest.

It is a scandal that the state government which has the responsibility to run the entire state, claims not to have the money or expertise to run a small gallery. It is ignorant to say the state lacks expertise. Karnataka has artists, art scholars and curators of high repute and vast experience.

Theatre people here who have a strong lobby, had already got the government to build Kalamandira theatres in each district way back in the 1980s. We not only demand that the state invest and run this gallery in consultation with the art community, but also build a string of art galleries all over the state to develop the art scene.

About Pushpamala N 1 Article
The author has not yet added any personal or biographical info to her or his author profile.

The deadly road to Madiwala…

The pothole-ridden road from Krupanidhi College junction to Total Mall is dangerous for two-wheeler riders. A commuter explains why and says that safety is in one’s own hands.

Time to work together…

There was a protest below Sarjapur Road flyover by the residents who live in the apartments next to the Outer Ring Road. And the outcome was positive. A citizen photographer captures the spirit in a video.

If you thought the new common zoning rules don’t concern you, think again. A road that is of 30 feet width can have all types of commercial activities, with no space for parking. And it’s going to be terrible in a city like Bengaluru.