L&T South City is an apartment complex in JP Nagar. Comprising 2,000 flats, the complex has four borewells, from which it draws 2 lakh litre water per day. Along with this, the complex also buys water from Bangalore Water Supply and Sewerage Board (BWSSB) and water tankers.

The complex has a functional sewage treatment plant as per KSPCB guidelines, and uses treated water for flushing and gardening. Apartment residents say that any water left into the BWSSB sewage line is treated water. Still, the complex ends up paying sanitary charge of Rs 2 lakh per month. The residents don’t see a reason for this, yet they are forced to pay Rs 100 per month as sanitary charge. Along with this, they also pay extra 25% of their BWSSB bill as sanitary charge for using Cauvery water. 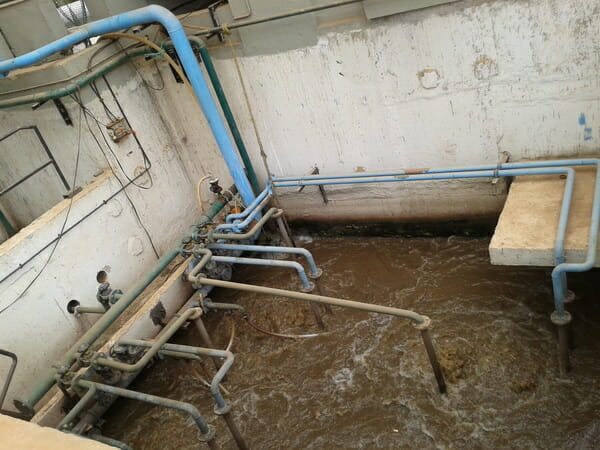 Most of the apartments that got plan sanction after 2010 have sewage treatment plants. Pic: Satarupa Sen Bhattacharya

When it comes to borewell water, sanitary charge is not based on the amount of water consumed by the household, because there is no system in place to quantify the water used by every flat. In fact, if an independent house or flat owner uses BWSSB as well as borewell water, he ends up paying sanitary charge for both the connections.

The idea behind levying sanitary charge is to account for the cost incurred by the BWSSB for collecting, treating and recycling the used water. Again, as per the Board’s guidelines, this is applicable only to those houses and apartments which let the waste water flow through BWSSB’s sewerage lines.

“The logic behind this is that the water pumped from the well is then used and let out into the sewage pipes,” explains Vishwanath, founder of the Rainwater Club, director of Biome Solutions and an active figure in the water conservation field.

Lokesha A, Financial Advisor and Chief Accounts Officer with the BWSSB, says that the charge is levied for sanitation purposes for apartment complexes that have private bore wells. “This is levied only on those apartments and households that are using a BWSSB sanitary connection and do not have private sewage water treatment system. The water outflow from these households has to be treated before it is released, as per the directions of the Karnataka State Pollution Control Board,” he explains, adding, “supplying water is only one part of the BWSSB’s responsibilities. Taking back waste water is another important function.”

Forced to pay sanitary charge when there’s no drainage usage

“When we are treating the waste water inside the complex, and not letting the waste as well as treated water to the BWSSB sewerage lines, why is the board collecting amount from us?” he questions, adding, “It is nothing but discrimination meted against (apartments) by the authorities.”

As per the KSPCB rules, bulk consumers having more than 50 flats are supposed to have their own sewage treatment plant and use the water within the apartment premises—not let anything into Raja kaluve or stormwater networks. The treated water is generally used for gardening and flushing, while the solid manure is treated as a fertiliser.

No sanitary charge for tanker water

What is perplexing in this entire system of sanitary charge collection is, the BWSSB does not impose sanitary charge on consumption of tanker water, for domestic buildings. When asked the reason for the exemption, Venkataraju, BWSSB Chief Engineer said that it was because there is no system to keep a tab on the households purchasing tanker water. “There is no accountability for tanker water usage, hence sanitary charge has not been imposed,” he said.

Vishwanath says that there are examples of a few apartment complexes closing down their borewells to avoid payment of extra sanitary charge to BWSSB. Specially if the yield of the borewell is low, the apartment residents find it unnecessary to pay this charge as they may not use borewell water.

In some cases, though the apartments do not use the borewell water as the water is hard compared to that of Cauvery water and tanker water, they do pay the sanitary charge on borewell to BWSSB to keep the borewell functional in case of acute shortage of water. After all, tankers too are not completely reliable, considering the inordinate supply of water at times.

The confusion created by the criteria and confusion in the collection of sanitation charges has left the citizens waiting for BWSSB to rationalise the sanitary charge collection.

Bengaluru’s treated water foaming in Kolar: Plan to use in irrigation on hold

Plan of using treated water in agriculture is a new idea. The foam and froth have put a temporary stop to the project. What needs to be done to make the project a viable option where treated water can be used?