A meeting conducted on June 26, 2015, between the government and the Telecom Service Providers (TSPs) decided that the government will help the telecom service providers get a “speedy clearance” for laying Optical Fibre Cables (OFCs).

According to this meeting, the applications received were to be cleared within 15 days by the Chief Engineer, BBMP (OFC), who will also have to provide security to the digging staff through police, if requested.

There will be no criminal charges or penalties levied on telecom companies, for the damages if any, if restored within 96 hours of a notice. There is no mention of a compulsory inspection in the minutes, though it asks ward engineers to report everything to Chief Engineers, with no authority to stop the work in any case of any incident.

The meeting also decided to open up government buildings for the installation of telecom towers and asked the telecom companies to prepare a list of such buildings.

However, the effect of this has been felt across the city, with telecom operators starting to dig various roads across the city. Most recent incident of outrageous digging was of the pavement on St Marks Road with TenderSURE design where someone reportedly (source: Bangalore Mirror) dug the pavement and inserted a blank Optical Fibre Cable.

RK Mishra, a civic activist and urban issues expert, has written a strong letter to Chief Secretary Koushik Mukherjee, expressing the concerns regarding this trend.

I am writing this email after lot of people have shared their anguish and shock personally and on social media, having seen newly asphalted roads including Signal Free Corridors and TenderSure Roads being dug up by the TELCOs/OFC companies the very next day.

Sir, this is unacceptable to us, the citizens, who are made to suffer perpetually the dug and potholed roads despite thousands of crores of our hard-earned tax money being spent on these roads.

Good arguments must have been put forward for you to accord this “dig at will” permission in good faith, but please be aware that telecom companies run mafia operations where local goons act as sub-contractors who dig clandestinely and never repair. They threaten BBMP officials and flaunt this meeting minutes (attached) making BBMP engineers helpless and unable to act.

Over and above this digging, all TELCOs also hang OFC cables on street lights/trees for redundancy. Every road has 20-30 OFC/Coaxial Cables and Junction Boxes/Repeaters dangling on top of streetlights and trees making streetlight poles bend and at times hitting motorists and pedestrians when these cables come loose. This is an untenable situation.

Over last one year, we have had several meetings with TELCO representatives at BBMP along with BBMP Commissioner and offered them to form a consortium to create/use OFC Ducts on all Arterial Roads and Signal Free Corridors which would have avoided this permanent digging spree, but they flatly refused and instead chose to meet you and get this order passed.

Please call another meeting where TELCOs are told to work with BBMP to create these DUCTS on Cost Sharing/Usage Fee basis on all major Arterial Roads and Signal Free Corridors (which come under major roads division of BBMP) so that this problem can be solved for good and in the best interest of all stakeholders. These hanging cables on street lights/trees must also go underground in the proposed ducts on the footpath. The cost of the ducts is not very high – around Rs 20-50 Lakh per km + footpath repair cost.

Sir, we the citizens are sick and tired of continuous digging by Telcos/OFC companies. Last week they dug a TenderSure road which you are personally monitoring. This week they dug newly tarred Signal Free Corridor (Old Airport Road). This can’t be allowed to go on.

The note on minutes of meetings is in circulation among RWAs & NGOs and people are furious seeing Chief Secretary adding to their misery by allowing TELCOs to dig at will. BBMP officials are also frustrated but they are helpless in light of this order.

Please do the needful.

Minutes of meeting between Chief Secretary and telecom companies’ representatives 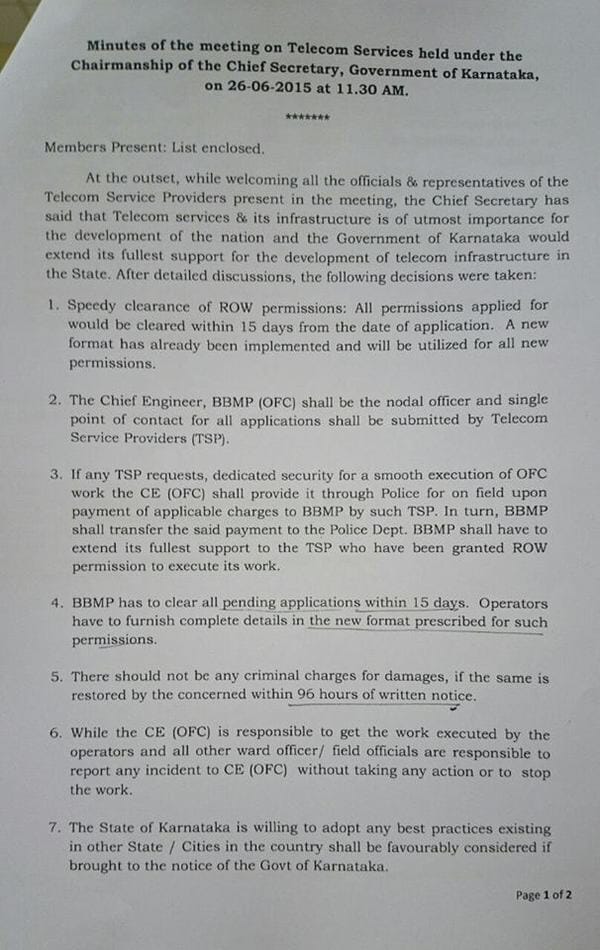 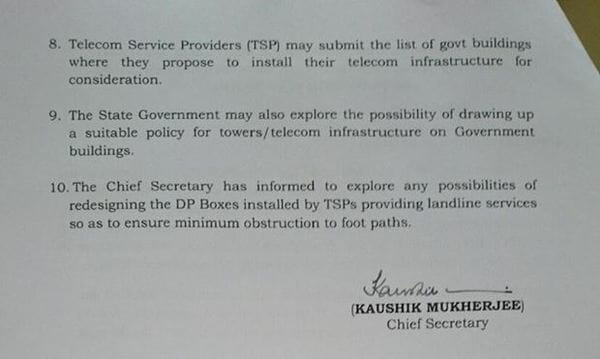 Minutes of meeting between Chief Secretary and TELCOs

Last week, traffic police notified the bus priority lane on ORR. Meanwhile, eight transit hubs are being planned around Bengaluru to reduce traffic congestion. Read more on news from the city over the past week, in our roundup

Bengaluru does a ‘referendum’ on Lokpal

What do Bangaloreans really want in a Lokpal Bill? People in two parliamentary constituencies are expressing their views to the Indian Against Corruption group.