The Alcoholics Anonymous (AA) meeting begins with the Serenity Prayer, recited mostly by the booming voices of men.

Manjunath (name changed on request), a secretary for one of the Alcoholics Anonymous groups in Bengaluru, sits at the head of the borrowed schoolroom. As 11 am edges nearer, the crowd before him grows from 25 to 30 to nearly 40 people. They trickle in one by one, occasionally in pairs.

Manjunath is a recovering alcoholic entering his 33rd year of sobriety. A friend, who would later become his sponsor, once asked Manjunath why he drank. “And I said ‘I hate the stuff, but I can’t do without it,’” says Manjunath. “So the next day he brought me to my first meeting. That was the first time I ever came to know of this as a disease.”

Started in the US in 1935, and present in over 80 countries, AA compares alcoholism to a disease like diabetes. According to AA, the disease works like this: The chronic alcoholic has the first drink of alcohol and experiences a ‘physical allergy, which creates a mental obsession and leads to spiritual bankruptcy’. The chronic alcoholic cannot drink like others can, and is characterised by ‘vain attempts’ to do so. An alcoholic cannot be cured, it says, but the disorder can be stopped from progressing, where the alcoholic must undergo not only physical change, by spiritual and mental change as well. 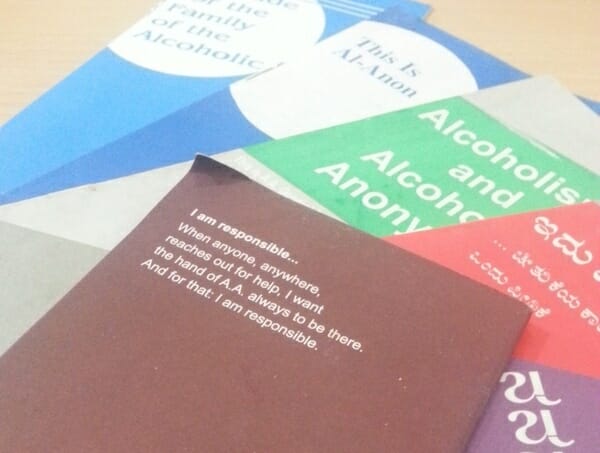 While Alcoholics Anonymous (AA) is a well-known support group, many non-alcoholics may not know what goes on in a meeting. The coordinator, in this case Manjunath, sits at the front, behind a small desk. They attendees look exceptionally normal; diverse in age, shape and background, but altogether average.

The meeting then begins with a brief introduction to AA, a call for newcomers — there is one, sitting near the back — and of course, the Serenity Prayer. Manjunath calls for the group to share their stories, and in particular to welcome their new member.

A young man sits in the third row, grinning amiably. He is one of the first to raise his hand. He introduces himself, “Good morning, my name is ____ and I am an alcoholic.” Manjunath tells him, “Your smile is infectious!” The young man’s companion pats him on the back and says, “He got his 90 day chip yesterday!” The grin widens.

Much like the group at Al-Anon, they’re all here for the same reason, but each case is different. The smiling man tells the group how he turned to alcohol to escape his anxiety. When he tells them he received his 90 day chip — a marker for sobriety — he is greeted by boisterous applause.

Despite the difficult subject matter, the mood is ultimately cheerful. Manjunath tells the group, “After AA, there is no B.A., M.A. or Ph.D.” And while the jokes earns him a laugh from his listeners, this reflects one of the hardest parts of AA: there is no finish line.

“All I know is just this one sentence that sticks in my head: I will never be cured of alcoholism,” says Manjunath. He calls each day of sobriety a ‘daily reprieve’ from alcoholism.

When he first joined the programme in Bengaluru in 1982, it consisted of six men in the whole of Bengaluru. Later, as membership surged, more and more weekly meetings began to take place. “I attended eight meetings a week for the first eight and half years of my sobriety,” he said. The programme began 51 years ago in Bengaluru, spreading from other Indian cities such as Mumbai. Then too, the group was sparse. They met once a week at different locations around the city.

Now, Manjunath attends around two meetings per week, and there are over 40 groups meetings that happen at least twice a week throughout the city.

People end up at their first AA meeting through a variety of routes. They may spot one of the advertisements on a bus, or at their school or workplace. The helpline there will direct them to a Bengaluru-based call centre, and arrange for them to meet someone and be taken to a meeting. Others have come from rehabilitation centres after being released. Many centres recommend the programme to alcoholics once they leave. Others, like the newcomer in this meeting, come on their own. Usually, a friend or colleague has recommended the programme.

Most, if not all of them, at any given meeting are men. Manjunath blames this in part on the even harsher social stigma against alcoholism for women. He says that it is improving, considering that AA works to raise awareness at women’s colleges and elsewhere.

The success rate is hard to gauge. In part because what ‘success’ means is hard to gauge. Manjunath says sobriety is tied to constant spiritual growth, or a ‘psychic change’ or ‘spiritual awakening’, as it is described in AA literature. In that sense, he sees hospitals as partially ineffective. “Hospitals can only detox you,” he said. “Unless the alcoholic experiences a psychic change, there is no way anything can be guaranteed.”

As Manjunath says, there’s no graduating from AA. The little successes, like the smiling man’s 90 day chip, are only milestones in a constant push forward.

“Sobriety is very fragile. It’s like driving uphill, you have to keep your foot on the pedal the whole time or you’ll go back into a tailspin and crash back at square one.” He adds: “What does sobriety guarantee you? Absolutely nothing! I have to work at it.”

Al-Anon: Helping the families of alcoholics

It’s not only the alcoholic who seeks help; their loved ones or families often seek respite from the impacts of alcoholism too. That’s where the lesser-known Al-Anon group comes in. According to Manjunath, Al-Anon meetings have been around since 1975 or so, when an American woman began hosting them in Bengaluru. Adults can join the anonymous support group to get help in coping with their alcoholic family members, spouses or loved ones. They too meet in the borrowed rooms of schools, hospitals and churches to share stories of life with alcoholism.

The Al-Anon meeting doesn’t look too different from an Alcoholics Anonymous meeting. Except the room has less people, and comprises both men and women.

The meeting here too, like AA meetings, begins with the Serenity Prayer, “God grant me the serenity to accept the things I cannot change…” The small group, no more than eight people, stand in a circle, reciting the prayer aloud. Hands joined, this is how they close their weekly meetings. The past hour has been about the things they cannot change: the past, society, and, most importantly, the alcoholic.

This is one of many Al-Anon meetings that happen weekly in Bengaluru. A support group created by and for the friends and families of alcoholics, it also has a partner organisation, Alateen, which does the same for people 19 years old and younger. Their meetings are about accepting the things they cannot change, but also changing the one thing they say they can: themselves.

A coordinator for the group, Maria (name changed on request), first came to Al-Anon in 2004. She says, “When my son was using, I had been to a rehabilitation centre. There, they told me that there was a support group.” At first, she felt out of place. She was embarrassed to attend. “I thought ‘These meetings are not meant for me.’”

However, the people in Maria’s group were welcoming, they made her feel comfortable and, despite her initial hesitation, she went back for another meeting. “When I returned, it was out of curiosity: how have these people become happy?” she says.

Now, 11 years later, she is the one helping newcomers to find their own peace. Every week, she coordinates a small group, in which people share stories of their life with alcoholism. Women, and some men, of all ages and backgrounds come together to tell stories of bankruptcy, physical abuse, verbal abuse, and the litany of other problems that come with living with or caring for an alcoholic. All in the comfort of complete anonymity.

Walking past the open door of the meeting, they’re a perfectly normal looking, albeit diverse, group of people. Dressed in jeans or saris, sometimes sipping coffee. Linger for a moment, and you may see someone dab their eyes with a tissue from their bag. No one stands at the podium at the front of the room, they all share the seats at its centre.

The programme follows the Twelve Steps from Alcoholics Anonymous, with some additions. The three C’s, for example: Cause, control, cure. Family members are taught that they did not cause the alcoholism, they cannot control the alcoholic, and they cannot cure them either. Therefore, Maria says, they must ‘detach with love’.

“Newcomers come in with just one intention: to stop the alcoholic from drinking,” she says. In her experience, the three C’s help these people find peace, and accept alcoholism as a disease they cannot control. She adds, “[The alcoholic] will be like that all their lives, until they go to the grave.”

Before she joined Al-Anon, she didn’t think of alcoholism as a disease, but as a choice her son was making. “I hated him. But today, I realise it’s a disease and he’s fighting a battle to stay sober.”

Often, Al-Anon members come to the gathering even if the alcoholic in their life is not seeking help. However, Maria said it is important that when the alcoholic seeks help, so must his or her family.

Some are able to leave an alcoholic spouse, either thanks to a supportive family or their own financial independence. But many families cannot leave the alcoholic, be it their child, spouse, sibling or parent. By detaching with love, or letting go of the alcoholic, men and women like Maria are able to reclaim their lives. Similarly, alcoholics like Manjunath are able to receive help in stopping a disease that could eventually kill them, surrounded by a group of their peers. For many in their last resort, and in many cases, it’s been the only thing that’s worked.

As they say at the end of each meeting, as a reassurance to newcomers and to themselves: “Keep coming back! It works!”

This less-publicised show held in Lalbagh, Bangalore, had brought a whole new world of Orchids. There were stall selling Orchid seeds, books and materials related to Orchid-growing.

Flyover under construction and pandal below it! Huge crowds gather to listen to the live bands performing there causing traffic jam.