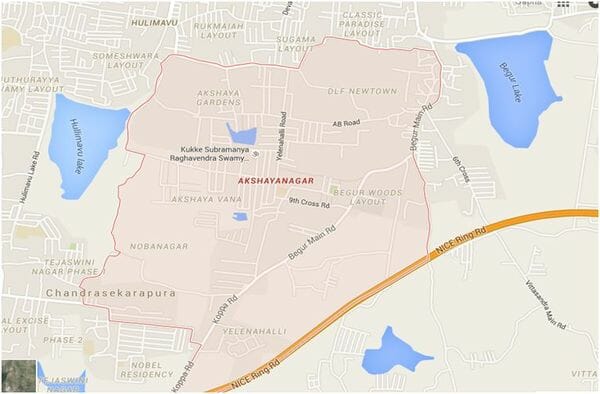 This is Akshayanagar Layout, situated off Bannerghatta Road (Note: Akshayanagar is also the name of another layout situated in Ramamurthy Nagar, Bangalore).

Sandwiched between Hulimavu Lake on one side and Begur Lake on the other, Akshayanagar is an upcoming locality with several residential projects under construction currently. Owing to its proximity to Bannerghatta Road, Electronic City and Jigani, it is a much sort after locality by Bangalore’s techie population.

Akshayanagar Layout can be accessed from Bannerghatta Road via the BDA 80 feet road (one of the many access points), which joins the Hulimavu-Begur Road, and further connects to the Yelenahalli Road, on both sides of which the layout is located.

The Hulimavu Begur road boasts of upscale residential projects such as Hiranandani Queensgate and DLF New Town. Another conspicuous aspect of this area today is the absence of asphalted roads. While the Hulimavu Begur-stretch right outside the Hiranandani project has stayed this way for a long time now, the Yelenahalli Road too has been completely dug up recently. 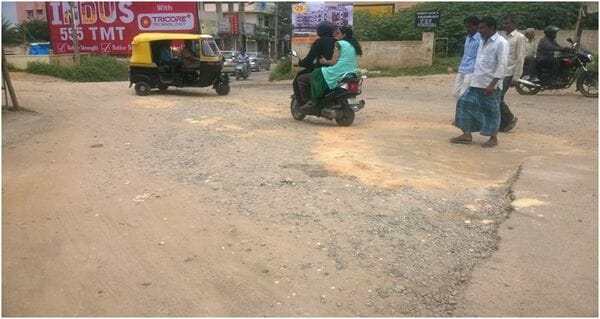 The area is not sufficiently lit at night, making these roads fatal especially during the monsoons. I avoid pillion riding completely because the risk is just too high. 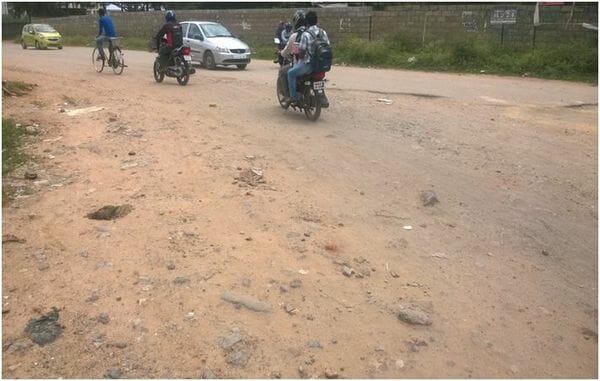 Another view of the stretch outside Hiranandani Queensgate. Pic: Sapna Prabhu 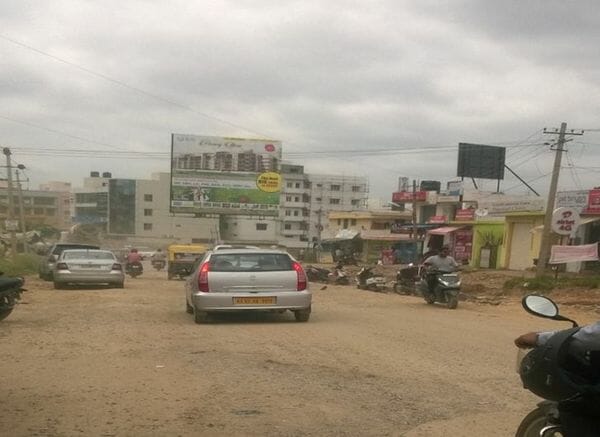 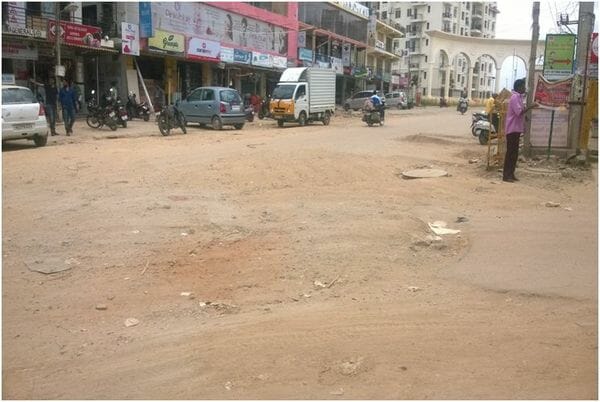 Though several open complaints have been made by residents of the area on ichangemycity.com requesting road repair, no action has been taken so far.

While the Yelenahalli road is being fixed temporarily using jelly stones, this certainly will not help in the long run. Being the connecting road to Begur, this is a busy road which sees a lot of traffic. Until these roads are asphalted, the problem is going to be keep coming back to bother the residents.

I’m hoping that by highlighting this, we can expect some permanent solution from BBMP soon.

In pictures: Seven deadly dividers
The deadly road to Madiwala…
Koramangala 3rd Block a death trap after Sarjapur Road was made one-way

About Sapna Prabhu 2 Articles
Sapna works for a financial services firm. During her free time, she loves to cycle.

Got a traffic ticket by mistake? Police say no chance

The families of Rifleman K S Ravindra who was killed in J&K and BSF Constable Bheema Shankar Hadapad, who lost his life to naxals in Chattisgarh were among those honoured at a Vijay Diwas ceremony on December 16th.