November 30. Sindhu Naik, a resident of North Bengaluru, got a notice from her apartment community: “A drive being conducted this Saturday (5th Dec) & Sun (6th Dec) from 9:00 a.m. to 6:00 p.m. for the verification of the Aadhar card. Ms. Kumari S. from the Registrar General of Citizen Registration will be visiting our complex for this purpose. Please keep your Aadhar cards handy at this time.”

She asked her friends and others, but did not get any clarity on what the issue was about. Citizen Matters tried asking Unique Identity Authority of India, but the officials in the department denied having any knowledge about any such drive. Our query regarding this with the BBMP Commissioner elicited an information that it is perhaps a national census, however we could not get other details.

On December 23, Jayalaxmi Patil, a theatre and TV actor living in Konanakunte was visited by three BBMP officials who wanted her to give them the Aadhaar numbers of her family members. When she asked why, they told her it was for a smart card, which will eliminate the need of voter ID and senior citizen cards. A person claiming to be from BBMP even told her on phone that they have come there for verifying Aadhaar card. Jayalaxmi, however, refused to give the details because they weren’t clear enough.

Citizens have been sharing concern over the exercise, of the authenticity of the enumerators, of the need to share Aadhaar number etc, thanks to the lack of publicity and secrecy around the whole exercise.

So what’s this Aadhaar verification drive all about?

Even though it has been over a month since the Directorate of Census Operations began the process of updating National Population Register (NPR) and seeding Aadhaar numbers to this register, the citizens of Bengaluru are still largely unaware of this latest census. This is because the central government stopped at little publicity, with no formal launch process. There were some advertisements in print media about the updation process in November which few would have noticed. When the enumerator arrives at the doorsteps asking for information and Aadhaar number, people are left wondering what this process is all about.

The Home Ministry of India launched this nation-wide exercise of NPR updation and seeding Aadhaar number on November 15th. The exercise is carried out in an attempt to update the 2011 census database along with Aadhaar number, towards issuing National Identity Cards.

Aadhaar or no Aadhaar, biometrics compulsory

State Director of Census Operations, Helen Prem Kumar told Citizen Matters that the nation-wide exercise begun on November 15th and was supposed to end on December 15th. However, now the date has been extended and the process will continue till January 8th.

“We had collected citizen’s information during the last 2011 census. However, there are chances of errors in the data we have collected. With the Central government planning to issue National Identity Card to each of its citizen, we have taken up the work of verifying the information and also seed Aadhaar data to NPR database. During the process of verification, the enumerator will add the phone number of the house owner, verify the total number of family members, mention details about the newly added family member, demised person etc,” she added.

In a nutshell, whether you have opted for Aadhaar card or not, you will have to provide your biometric identification (iris and fingerprint) to the government, to be considered as an Indian citizen.

Helen Prem Kumar said that they have deployed State government staff for the enumeration work. They are given instruction to visit the houses in the morning and evening hours when the working members will remain in their house.

To a query on the percentage of updation and Aadhaar seeding done in Bengaluru, the Director refused to divulge the information.

An enumerator on the condition of anonymity said that at least 1/3rd of the houses that he visits remain locked. “I visit the locked house twice or thrice after which I mark ‘house is locked’ in the register,” he said.

What is National Population Register (NPR)?

According to the FAQ on NPR website, it is a register of “usual residents” of the country, prepared at the local (village/city), sub-district (tehsil/taluk, district, state and national level. Citizenship Act 1955 and the Citizenship (Registration of Citizens and issue of National Identity Cards) Rules, 2003 have provisions to have such a register.

What details will NPR contain?

NPR will have the following details:

The biometrics will be collected as per the processes and standards laid down by the Unique Identification Authority of India. Citizens should also provide proof for date of birth. Those who have Aadhaar card should produce the card to the enumerator and the number will be entered in the NPR booklet. Those who have enrolled for Aadhaar but did not get the Aadhaar card, can produce the UIDAI acknowledgement slip.

How is a person supposed to register for the NPR?

During the first phase of Census 2011, enumerators have visited every household and have collected the details required for the NPR in a paper format. These forms have been scanned and the data has been entered into an electronic database in two languages -Kannada and English.

Biometric attributes such as photograph, ten fingerprints and two iris images will be added to the NPR database by organising enrolment camps in each local area. The enrolment will be done in the presence of government servants appointed for this purpose.

Here is how the process is supposed to be conducted. 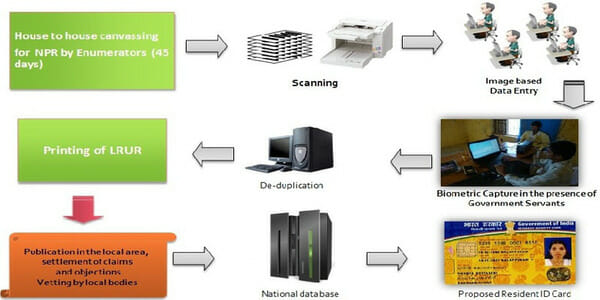 ‘Social audit of the collected data for transparency’

According to the FAQ, after the collection of biographic data collected by a government servant at the doorstep of the individual and the biometrics collected in the presence of government servants, the biographic data along with the photograph will be displayed in the local area for inviting claims and objections. The lists will also be scrutinized by the local officials.

“These lists would also be placed in the Gram Sabhas and Ward Committees. Once the vetting by the local authorities is completed, the NPR database will be finalized. This process of social audit would bring in transparency and equity,” says the website.

It is not clear how this is going to be implemented practially, as most wards in Bengaluru don’t have ward committees yet. Even if there are ward committees, there is no way for ward committee members to verify each indovidual in a given area. There is no clarity on what strategies will be adopted for social audit.

Too many cards, too much confusion?

Enumerators say the card will arrive at the doorsteps of people after this verification drive, of which UIDAI officials seem to be unaware of. However, which card is supposed to arrive, and when?

Earlier there were proposals for Aadhaar smart card which will have biometric details required for verification embedded in chips. Once the central government’s leadership changed, there were proposals to go with National Population register instead of Aadhaar details, towards which the government stepped up the efforts. There were predictions that Aadhaar will become redundant with this process.

In August 2014, the Home Ministry officially announced its plan to create a massive database of Indian residents which will result in issuing National Identity Card. This was also a proposal the NDA manifesto to provide identity cards to citizens to identify illegal immigrants. So there is another card proposed now – the National Identity Card.

But the National Identity Card right now is supposed to be given to every person living in India (not just citizens with voting rights). But there will be a way to identify citizens with voting rights as well. This is imagined to have varying colours to identify citizens and noncitizens, but there is no clarity on the entire scheme yet, on public domain. So that’s one more card in your card holder, with sensitive information about you loaded into it. 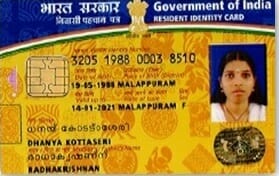 UIDAI-appointed registrars are conducting enrolments for Aadhaar in 24 states and union territories including Karnataka. In the rest of the country, the Registrar General of India (Census department) is conducting enrolments for the National Population Register (NPR). Data collected for NPR will be passed on to UIDAI as well for Aadhaar generation. For this purpose, there are NPR states and non-NPR states defined in the UIDAI website, of which Karnataka falls under non-NPR list.

In the non-NPR states, like Karnataka, Census Department is doing only the verification, based on Census-2011, as biometric details have already been taken through Aadhaar.

What are the legal provisions under which the NPR is being created?

The Citizenship Act 1955 was amended in 2004,  by inserting Section 14A which provides for the following:

What is the connection between NPR and Aadhaar (UID Number)?

The NPR is a register of people who have lived in India for last six months or going to live in India for next six months. The data collected in NPR after authentication will be sent to UIDAI for de-duplication and issue of Aadhaar Number. Thus the register will contain three elements of data – demographic data, biometric data and the Aadhaar number.

There is no exception for people to register under NPR, even though they already have voter IDs or Aadhaar cards. They have to undergo the processes like the collection of data at the doorstep of the individual by authorized persons, collection of biometrics, authentication through social audit, verification by authorities etc mandatorily.

What is the background of National Population register?

Any wrong information given to enumerators will attract penalties under Citizenship Rules 2003.

Concerns over the way the data is handled

Sindhu Naik who questioned the enumerator and got answers to many of her doubts, raises concerns regarding the process. The way the updation is being done – she fears that it could result in the same type of errors that exist in the current voter id process. She has the following doubts:

We tried to get more information on the issue including Aadhaar smart cards and National Identity Cards. However the UIDAI officials responded saying they have no knowledge of the process that is going on. Hence there is no clarity on whether the card the enumerators are talking about is UIDAI smart card or National Identity Card.

Quick and convenient: Cabs in Bangalore

How to decide which cab suits your requirement? How to save time, money while hiring the cabs? What features are available in taxi services? A guide that helps you choose your cab wisely.

Now that the Mayor has made an announcement in the Bruhat Bengaluru Mahanagara Palike Council meeting that Ward Committee (WC) meetings will be held on the 1st Saturday of every month, beginning in December. Now