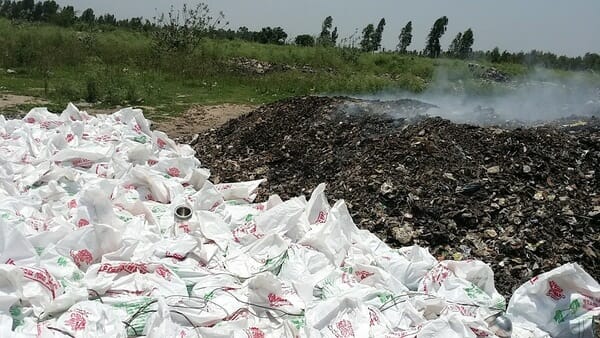 Bags filled with burnt and sieved garbage. You can also see the burning garbage. Pic: Shared by a citizen

It has been 10 days since the issue of burning garbage near Choodasandra and filling it in vermicompost bags under the label of Karnataka Compost Development Corporation (KCDC) came to light. The action taken on the issue is little, and the individuals/organisations involved in the fraud remain unidentified.

Citizen Matters had published a detailed report on how a few workers were burning city garbage in an open site at Choodasandra off Sarjapur Road in Bengaluru, and filling it in bags bearing the name of KCDC vermicompost. The workers, when enquired, had said that they were working for Terra Firma.

Terra Firma is the name of the private firm that has been given the contract to process the garbage generated in Bengaluru. But, both KCDC and Terra Firma had denied their involvement in the fraud.

When Citizen Matters approached KCDC Advisor Venkoji Rao asking what action has the KCDC taken to trace the culprits, he said he had visited the spot for inspection but the site was empty. “We sent an email to Terra Firma inquiring its role soon after the issue broke out. In its reply, Terra Firma management denied its involvement in the garbage burning scam. Since we could not confirm who the culprit is, we filed a police complaint at HSR police station asking to find out the culprits who were burning garbage and filling it in vermicompost bags. The police complaint was given as per the directions of Special Commissioner for Solid Waste Management Darpan Jain,” said Rao.

When Citizen Matters contacted HSR police station, the police said that they were yet to crack the case.

Meanwhile, KCDC has not yet cancelled the tender agreement with Terra Firma due to the post of KCDC Managing Director remaining vacant.

On the other hand, Karnataka State Pollution Control Board (KSPCB) has issued notices to KCDC and Terra Firma on June 9, 2015. KSPCB Assistant Environment Engineer Dr Raju said that in its notice, the KSPCB has asked the KCDC to furnish complete details about the tender agreements with Terra Firma and other waste processing firms, specifications about raw materials used for preparing various types of compost, total quantity of compost supplied to farmers every year, quality checking mechanism etc.

“We have also issued a notice to Terra Firma asking its role in garbage burning at Choodasandra. When we went for the spot inspection after the issue broke out, the site was empty except a few rag-pickers picking the leftover waste. However, based on a few observations and photographs clicked during the visit of KSPCB official Lokesh, we are certain that the site was indeed a garbage burning yard,” Dr Raju said. Both the organisations have been given 10 days to reply to the notice, after which the KSPCB will take further action.

Meanwhile, Terra Firma Managing Director Ganesh who had earlier said that he  would file a police complaint against unknown individuals for tarnishing his firm’s image by using its name, did not yet confirm whether a police complaint has been registered. “I have asked my staff to lodge a complaint, but did not follow up as I was out of station,” he said.

MLA backs citizens protesting against KCDC
Will the KCDC neighbourhood finally be free of smelly nights?
How is wet waste processed at the KCDC?
Can of worms opens up after govt composting firm sells garbage as vermicompost
Govt composting firm to review ties with Terra Firma on supplying organic compost

BBMP admin was supposed to study the old court orders and appear in the hearing. The court asks the BBMP admin and the commissioner to attend next hearing.

Problems of KCDC don’t seem to end. The processing of mixed garbage accumulated over the years is troubling the residents. MLA is asking the KCDC to shift, but the Commissioner says it is not possible.

There have been many trips where BBMP mayors and councillors wanted to learn about waste management in other cities. What is the output? Why are we still facing the crisis?