Editor’s note: We at Oorvani Foundation believe that it is important to give voice to all sides of a debate to make informed debates possible. Hence we provide space for multiple views, but the Foundation does not have any view of its own on any of the topics covered. 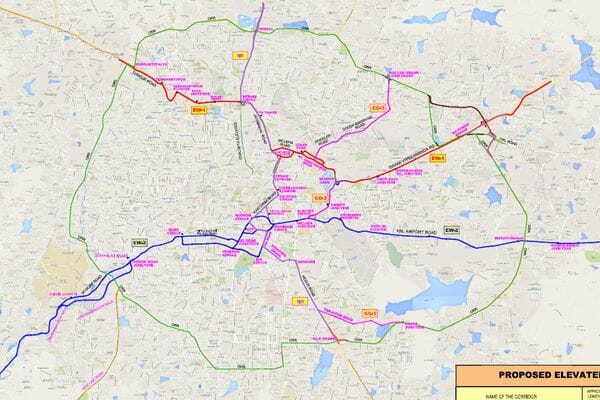 As someone who wrote an article here on Citizen Matters supporting the Hebbal-Chalukya flyover, I wish to reply to this article by Prakash Belawadi and Naresh Narasimhan. To begin with, all the arguments I made on why civil society in Bengaluru should in fact be supporting the Steel Flyover are applicable to elevated corridors too!

Now, my replies to the authors.

The Bruhat Bengaluru Mahanagara Palike (BBMP) and later, the Karnataka government found merit in the elevated corridors proposal and ordered a Detailed Feasibility Report (DFR) to be prepared by AECOM. That company is currently conducting soil tests on the proposed routes. They are a well-known organisation who even designed solutions for the London Olympics. They might even say that the project is not feasible. So where is the question of conflict of interest here?

Claim: No involvement of mobility experts

Nothing is preventing the BDA, Karnataka Road Development Corporation Limited or the BBMP Technical Advisory Committee from hiring mobility experts. However, the fact remains that DPRs are prepared by professional companies (like RITES, STUP etc) who are expected to have or consult mobility experts. If the authors believe none of these organisations have Urban Mobility experts, they can raise this issue, of course.

A lot of opposition to BDA / BBMP engineers and praise for a few urban mobility experts is misplaced. Many mobility experts in the city are also self-learned experts and no one is questioning their credentials for want of a college degree. There is no need to discourage people from various walks of life to come forward and propose solutions.

>> “Where’s any evidence of this? The reality is that a minimum of one lane will be lost everywhere on all existing roads and more at junctions.”

Even if, for the sake of argument, we accept that one lane will be lost, so what? When TenderSURE started in core Bengaluru areas, there was widespread criticism that motorable space is being reduced. Ravichandar Venkataraman, an urbanist who supports TenderSURE, even explained on Citizen Matters, why that was in fact a good thing. After allowing for equi-wide motor lanes, whatever extra space available was being made available to pedestrians and cyclists.

>> And, who made the assessment on environmental impact? How many trees will be cut?

This demand makes no sense. Do the authors expect rough estimates? Environmental impact and the number of trees that need to be cut will be known, only when the Detailed Project Report (DPR) is prepared. There is still a lot of time for that. We are currently only in the Feasibility study stage. As happened in the Steel Flyover project, there might even be a need for an independent Environmental impact study by SEIAA. Infact, such studies should be the norm and we can rightfully demand that BDA or KRDCL do not try to avoid such independent assessment.

1. Incorporating urban transportation as an important parameter at the urban planning stage rather than being a consequential requirement.

National Highways emerging out of the city are not just urban transportation. These elevated corridors should also be seen in the context of National Highway projects. Peripheral Ring Road is a by-pass road project, which will complete the circle that includes NICE Road. Vehicles bound for Bengaluru from National Highways still need a way to reach the city.

The Elevated Corridor project should of course be a part of the Bengaluru Master Plan, under the transport planning section. However, Bengaluru is already developed in the inner area – and not in the early stages of development, so it’s obviously a consequential requirement, which cannot be undone now. However connectivity via elevated corridors, metro or suburban rail should necessarily be a part of new BDA layouts.

2. Bringing about a more equitable allocation of road space with people, rather than vehicles, as its main focus

This was the crux of the article on Steel Flyover. Only elevated roads can do any justice to pedestrians and cyclists. As long as surface roads are congested, they’ll remain a nightmare for pedestrians. Only by moving faster traffic to elevated lanes, can we make the surface lanes pedestrian-friendly, with cycle lanes, wide footpaths, bus bays and pedestrian crossings.

3. Public Transport should be citywide, safe, seamless, user friendly, reliable and should provide good ambience with well-behaved drivers and conductors.

This elevated road corridors project is citywide. They’ll ensure surface lanes are safe, seamless, user-friendly, reliable and even provide great ambience under the elevated lanes, as shown by the Ugly Indians group in Bengaluru.

How are we going to get well-behaved drivers and conductors if BMTC buses are moving at 8 km/hr in never-ending traffic jams? We need to decongest roads with elevated corridors, for the health and wellbeing of people, drivers/conductors, cab/auto drivers and traffic police.

4. Walk and cycle should become safe modes of Urban Transport.

There is one obvious way to make pedestrians and cyclists safe on the roads. By moving fast moving traffic to elevated roads and using surface lanes for neighbourhood traffic.

Claim: Public opinion needs to be taken before, not after the DPR

This demand makes no sense. Meaningful consultations can happen when the DPR is available for people to study. Elevated corridors should of course be discussed at fora like BBMP Council, Karnataka Assembly, Bengaluru Metropolitan Planning Committee, Bengaluru Blue Print Action Group (BBPAG) etc. But why protest when there is only a feasibility study being done? Can’t our elected government even have the discretion of ordering a feasibility study? What kind of democracy do we imagine ours to be?

Claim: Out of sync with global imagination

This isn’t true. We need to be realistic and not go by imaginations. Paris and London have the largest metro networks in the world. Paris metro’s first line opened on 19 July 1900. London Underground started in 1863. We have barely started with Namma Metro. Why are we comparing ourselves with such cities? Bengaluru cannot even be compared to Mumbai and Chennai which have had 4+ track suburban rail network for several decades. Chennai Suburban Rail opened on 11th May 1931.

Comparison should be with cities which are facing similar transportation problems now, those that are predominantly served by road-based transport. To name a few,

The comparison with Mumbai on vehicle ownership is not very useful. Mumbai is a city of inequalities, with millions of people living in the squalor of slums while a minority lives in 27- storey houses. If the average Mumbaikar can afford, there will be a lot more vehicles in Mumbai. In contrast, Bengaluru is a transformational city where income is more reasonably distributed among people.

Most cars in Bengaluru are owned by first generation car owners. Number of cars registered in the city is not necessarily the problem. The number of vehicles on the road for daily commute is the problem.

However, I agree with the authors that X (road capacity) and Y (number of vehicles) need to be addressed. X, road capacity, must be increased with elevated road corridors and peripheral ring road. Y, the number of vehicles, can be decreased by promoting public transport.

About Balaji Chitra Ganesan 2 Articles
The author has not yet added any personal or biographical info to her or his author profile.

A walk for Thalassemia

“The Walk for Thalassemia” – an initiative aimed at raising awareness on Thalassemia is scheduled to be held on 22nd October 2011.

A unique celebration on the occasion of Ganesha Chaturthi, that encouraged the use of the humble yet powerful cycle.

The hyper-tension inducing headlines in newspapers can be a source of laughter too. Here’s a look at a few of them.