Also read: Have STP and fire hydrant in your apartment? This is what BESCOM can charge

In the past month, several apartment complexes on Sarjapur Road in Bengaluru received a notice from BESCOM asking for payment of additional security deposit. In one case, the notice specified that the existing deposit was Rs 47,120 and the calculated MMD (Months Minimum Deposit) was Rs 1,43,690, and therefore the difference of Rs 96,570 was needed to be paid to BESCOM to avoid disconnection.

When this came to Citizen Matters’ notice, we decided to have a chat with BESCOM to find out what the security deposit meant and why apartments should pay up. 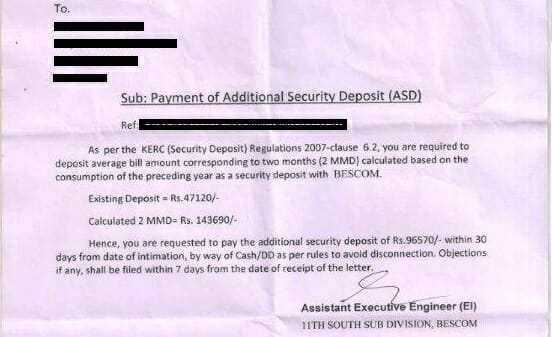 What is the security deposit that BESCOM asks for?

BESCOM collects a security deposit from all its consumers at the time of issuing a new connection. The initial security deposit is a standard amount that is fixed based on the amount of power that a consumer requires. From the following year, this amount is typically calculated on the average bill amount corresponding to two months in the case of monthly billing, and on the average bill amount corresponding to four months in case of bi-monthly billing.

BESCOM sources say that the security deposit is akin to the deposit collected by banks as minimum balance or by landlords from tenants prior to giving a house on rent, and that it was necessary to collect this money to protect itself from those consumers who did not pay their electricity bill on time.

BESCOM also states that consumers are typically given 30 days time to pay their bill. A grace period of 15 days is added to this. So even for those consumers who do not pay their bills on time, the connection typically did not get disconnected for 45 days and this was another reason why it was essential that they collected the security deposit.

What is the Additional security deposit (ASD)?

At any point in time, the security deposit that BESCOM needs to have from a consumer is equal to 2 months billing. For instance if the average bill amount corresponding for 2 months is Rs 1,500, where monthly billing is approx. Rs 750, then the security deposit that a consumer is liable to give BESCOM is Rs 1,500 (750×2).  In the following year, if the monthly billing value rises to Rs 950, as a result of hike in the unit price rise or due to increase in consumption of power, the security deposit should be Rs 1,900 (950×2). At this time, BESCOM sends a notice to the consumer, asking him to pay the difference, in this case, Rs 400, to meet the difference. This is the ASD amount that consumers can see at the bottom of their electricity bill and need to rightfully be paid to BESCOM.

Why does BESCOM ask for ASD every year?

With the almost annual increase in the unit price of power, and an increase in the number of electrical appliances that consumers use, it is only inevitable that power consumption too increases and with it the billing amount too. The Additional Security Deposit is the difference between the security deposit that BESCOM has and what they are meant to have in correlation with consumers’ present billing.

BESCOM carries out an audit every year in March-April and this is when the amount of security deposit for consumers is calculated. Officials also mentioned that they asked consumers for ASD, only if the additional amount to be paid was greater than Rs 200 for domestic consumers and Rs 1,000 for commercial consumers.

How can ASD be paid?

The Additional Security Deposit can be paid just as the regular electricity bill – either at one of BESCOM’s sub-divisional offices or at Bangalore One centers. Do ensure that you inform the staff sitting at the counter that the payment is for the ASD.

To make the ASD payment online, visit www.bescom.co.in and click on the text that reads Online Payment. This will take you to the Quick Payment page. Enter your Account ID (you will find this on your bill) and the captcha, and choose ASD (the available options are Pay Bill, ASD, ISD, and MSD). Once you agree to the Terms & Conditions, you can make the relevant payment.

Tips to reduce consumption of electricity

How can I check if I need to pay ASD?

The ASD amount is typically printed at the bottom of your monthly electricity bill, immediately after the total billing amount.

Is there any possibility of the ASD being refunded?

The ASD is refunded only on termination of a meter. BESCOM officials stated that the chances of them having to refund was minimal as people typically do not surrender their meter or terminate the connection.

However, Ravi, a resident of SJR Redwoods on Sarjapur Road, says that in the past he has seen cases where BESCOM gave discount on the electricity bill when the security deposit paid was more.

Who pays the ASD in case of a rented property?

In case of a rented property, the ASD needs to be paid by the land owner. However, it is up to the landlord and tenant to decide between themselves by mutual consent as to who would bear the responsibility of payment. In the event that the ASD amount was to be refunded, it would be given to the landlord; therefore the tenant shouldn’t ideally have to pay the amount.

What happens to the ASD request received for common areas in apartments?

The community has to share the amount and pay it. Typically, the association will pay it from the corpus or common funds.

Should the ASD be paid compulsorily?

Since January 2013, BESCOM has put a grievance redressal system in place where consumers can resolve complaints about faulty or excess billing. You can have a look at the press release here.

Even as the state government pushed the Sakrama bill to regularise the massive pile up of bye-law violations in Bengaluru, BBMP has systematically encouraged illegal buildings only further.

Cycling to work: How to get started?

If you plan to cycle your way to work in Bengaluru, here’s what you need to know.