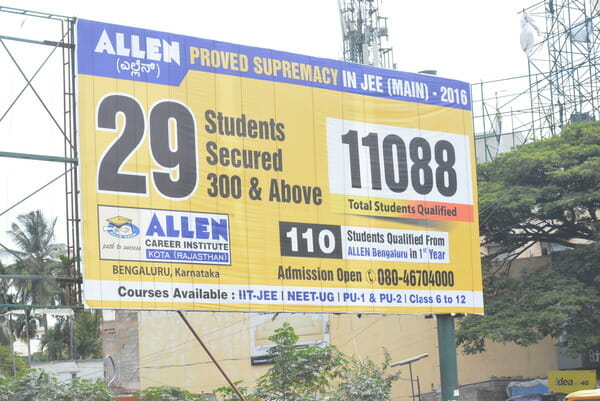 Hoarding displayed on one of the major roads of Bengaluru. Pic: Akshath G V

In the first part, we explored why BBMP is not making any money from illegal hoardings. Next part of the series tried to explore why the unauthorised hoardings are not removed. This part will examine the efforts being made to set the system right.

A few attempts were made in the past to modify the existing policies related to advertisement. Strangely, every attempt so far has gone futile and reformation moves just did not take off.

While implementation of the existing policy is a different aspect, the absence of a comprehensive practical policy is what the Bruhat Bengaluru Mahanagara Palike is lacking. Despite being a fast growing city, Bengaluru continues to follow the decade old Advertisement Byelaw. With the issues related to advertisements and inaction of the administration over removing illegal ads, poor advertisement revenue collection etc, many experts in the past have felt the need to revise the Advertisement Bye-laws 2006.

In February 2012, the BBMP’s Standing Committee for Taxation and Finance passed a resolution, which was soon passed in BBMP council too, proposing to revise the existing advertisement tax. In July 2013, the State government approved the resolution, but directed the civic body to follow the due procedure by amending the existing Advertisement Bye-laws 2006.

The BBMP invited objections/suggestions, made certain changes in the proposed tax rates, but the amendment proposal was kept pending before the BBMP council for its approval. After the first proposal to revise the tax was made and the government approved it, an advertising giant, Ambal Advertising Agency moved to the High Court in 2014, requesting to quash the resolution passed by the Standing Committee for Taxation and Finance on changing the advertisement bye-laws.

However, the court disposed of the case as the amendment was not published in official gazette yet. The court gave the liberty to the petitioner to approach the judiciary, if necessary, after the amended bye-laws are published in the gazette.

In June 2015, then BBMP Administrator T M Vijay Bhaskar approved the proposal and sent it to the government. On January 16th, 2016 the new tax rates were introduced, through an amendment.

The 2006 byelaw was not clear about addressing illegal hoarding issue. It only mentioned about imposing penalty on illegal hoardings but not about removing them. The new amendment doubled the advertising tax rate from Rs 129 sqm to Rs 260 sqm on important roads and Rs 200 for other roads. The amendment also added a new clause, that allows BBMP to remove the illegal hoardings without issuing notice to the advertiser and to cancel the registration of the advertisement agency.

Meanwhile, in August 2015, an online hoarding and advertising agency renewal system was introduced, which was believed to bring in transparency in the advertising section. Though the online system resulted in less tax collection in the year 2015-16, due to resistance from the advertisers, it is believed to help in the long run.

Citizen initiative yet to take off

Even as the debate over unauthorised hoardings raked up following Assistant Commissioner (Advertisement) K Mathai’s reports, a group of citizens from Bellandur took up the process of social audit. They approached Special Commissioner (Property Tax and Advertisement) V Rashmi asking if they can join their hands to curb the advertisement menace.

Mukund Kumar, a resident of Bellandur who took the initiative told Citizen Matters that the Special Commissioner agreed to their proposal and even visited Bellandur to chalk out plans for removing the unauthorised advertisements. A Whatsapp group was formed comprising of citizens and BBMP officials to discuss the plan of action to remove the advertisements.

“We even came up with an idea of rolling out mobile app to track down hoardings. The app would enable users to capture the photographs of hoardings and geo-tag them. Our plan was to do it on a trial basis on two stretches of Outer Ring Road and Sarjapur Road, collate the data and tally it against the penalty notices issued by the joint commissioner,” he said.

Meanwhile, the drive against illegal advertisements was underway in Mahadevapura and Bommanahalli zones. At least Rs 3 crore penalty was levied on illegal hoardings and the display removed in Bommanahalli zone. In this backdrop, the citizens asked the zonal officials (JC and AEE) to provide them with the copy of letter sent to BESCOM requesting to disconnect power to illegal hoardings and the copies of FIR filed under Disfigurement Act. “Despite Special Commissioner’s instruction to her subordinates to give us the information, they did not budge. We have not got the data yet,” Mukund says.

All this happened at the end of March 2016, and in the meantime the Special Commissioner went on a long leave for unknown reasons.

In the first week of January 2016, a task force was formed to prepare a draft of the much needed new advertisement policy. The task force chaired by BBMP Commissioner and Special Commissioner (Advertisement) as the Secretary, was entrusted with the responsibility to revisit the Advertisement Byelaw 2006 and come up with a better policy within 90 days of its constitution. But the work of Task Force too has been halted.

“The task force has met only once in last four months. The intention is to draft a policy that helps to augment the advertisement revenue collection and beautification of the city. But no major decision has been taken yet,” said M Shivaraju, Standing Committee for Taxation and Finance Chairman and Task Force member.

He said the Task Force is studying the advertisement policies of other cities like Mumbai and Delhi and would imbibe the good practices from them. “We are also looking into doing away with enforcement contract system by replacing it with a BBMP’s enforcement team supported by police force,” he said.

In the recent policy change, the BBMP has passed a resolution in the last council meeting held in May 2016, to regularise illegal hoardings and to start issuing fresh permissions to hoardings. In 2008, BBMP had imposed blanket ban on issuing permission to new hoardings.

The resolution lets the regularisation of illegal hoardings which had obtained permission from BBMP prior to 2008, but failed to renew the license. The regularisation would be done after collecting tax and the penalty for the period from when the hoarding was put up. However, the resolution gives no clarity on the other form of illegal hoardings which have been installed without permission.

The reason behind issuing new permission, according to the resolution is to “increase BBMP’s revenue.” “It will also prevent illegal advertisements,” the resolution says.

‘Lift the ban on advertisements’

Speaking about the reformation in advertising sector, former Bureaucrat and anti-corruption activist T R Raghunandan strongly pitches for removing the existing ban on hoardings. “In 2008, the then BBMP Commissioner stopped issuing permission to commercial hoardings, apparently at the behest of an advertising lobby which wanted to maintain its monopoly. In 2014, the BBMP even stopped issuing permission to self-hoardings. The ban created an artificial shortage of hoardings and led to mushrooming of unauthorised hoardings mostly by corporators and politicians,” he says.

He considers the decision strange, for the authorised hoardings were frozen because the BBMP could not control unauthorised hoardings. Hence, the first step towards advertisement policy reform, according to the former bureaucrat is to, crackdown on the illegal hoardings. Bangalore Metropolitan Task Force (BMTF) should take up the enforcement work. “Once all the hoardings are removed, online hoarding and agency renewal system should be implemented to bring in transparency in the system,” he says.

He also emphasises for the strict implementation of advertisement zones. The 2006 bye-law does not allow the display of advertisements in Zone ‘A,’ which is often violated.

On the debate over centralising the advertisement system from the existing decentralised system, T R Raghunandan believes the decentralised system is more effective. In the present system, the joint commissioners are given the power to handle advertisement related issues. But what is missing is that the Commissioner should fix targets to JCs and make them accountable, he says.

Hundreds of crores spent on garbage, what does BBMP have to show?

The city’s garbage woes did not appear overnight. What led to this tipping point? Citizen Matters looks back over the past 15 years and the current imbroglio in a new in-depth series. Is there an end in sight?

These numbers have been provided by BBMP. If you find that a number is not working, do comment below this post with that number. BOMMANAHALLI ZONE – 25732447 Name of  Employees Desigination Contact No MUNIRAJ