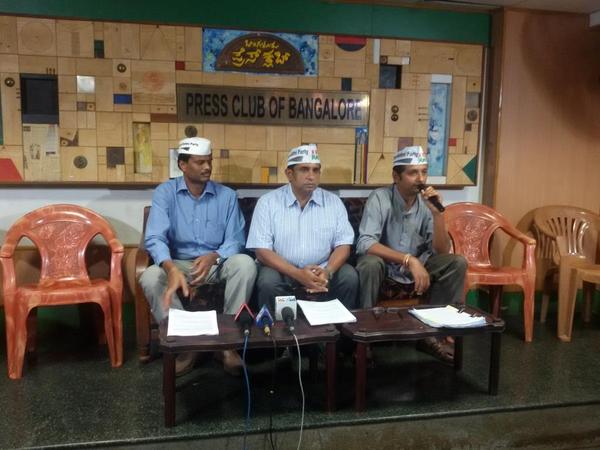 Aam Aadmi Party provides an alternate to the current political system in the country. The successive governments led by both BJP and Congress were not able to provide corruption free governance in the state. There is an overall governance issue in the state. The chronic civic issues faced by Bangalorians were due to the governance deficit and lack of action. Till now, several attempts were made to fix the civic problems without addressing the overall governance issues. This is only a temporary fix and permanent solution can be achieved only through getting the governance structure right.

The solution lies in the real devolution of power to the third tier of government being the “Municipality”. We at Aam Aadmi Party, believe in Swaraj, where government decision making reflects the will of the people. In essential character, this is the 74th amendment of the constitution. All previous governments and political parties have worked hard to avoid implementing the constitution. Even now, when the courts have ordered the implementation of the 74th amendment through formation of ward committees and the more important Municipal Planning Committee (MPC), every effort is being made to sabotage this process. This is done by doctoring the constituents of the MPC and by creating “Vision Groups”, which practically supersede the municipality, and making rules that render ward committees toothless.

Essentially city/village planning and administration need to be separated from the state government, with the municipality/panchayat having closer accountability to the citizens.  The efforts to achieve this fully need a constitutional, moral and aggressive voice.

If there was only one item on our wish list it would be WATER, and WATER FOR ALL. Many citizens do not know that the very existence of Bangalore is threatened by impending shortage of water. The urgency of this issue cannot be overstressed. A series of insensitive Land Mafia led actions have killed most of our lakes. And a system of clean healthy lakes, in turn replenishing ground water is the only real long term solution.

Closely along with lake rejuvenation, the other measure is city wide Rain Water Harvesting System is a must.

The third angle here is grossly inefficient running of the BWSSB. The absence and breakdown of the Underground Drainage Systems (UGDS) and sewage finding their way into storm water drains is the singular reason for our currently unhealthy lakes and drinking water.

Lake encroachment, wetland encroachment and Raja-kaluve (canal) destruction by some of the unprincipled players in the real estate with connivance of politicians and bureaucracy, creates the final death knell for our lakes. Legislation, political will and constant citizen voice is needed to top this.

Amongst other measures would be strict regulation of the water tanker industry.

The vibrancy of the economic activities of Bangalore can only be sustained with a more holistic plan and vision for mobility for Bangalore. The Metro apart, the solutions so far are purely in terms of road widening, flyovers and other concrete and steel measures.

The connectivity to satellite towns and even within Bangalore, already exists to a substantial measure, through conventional rail lines and stations. This also means that the network can be up and running in shortest possible time. Neither political will, nor any sense of urgency seems to be there by any government to make commuter rail a reality. At best there are snail paced efforts. One reason for this is that in terms of expenditure, commuter rail will take up only a fraction of the metro outlay, perhaps not making it a lucrative enough project from which to siphon money. At another level there does not seem to be the capability amongst current politicians and bureaucracy to really create a vision for Bangalore.

While Metro and commuter rail, are public transport, the needs of a large section of people for many years to come, will still be the Bus system. Areas to be looked at here are drastic scaling up of the Bus mode of transport and all associated activities. Currently, JNNURM funds are frittered away in making constructing Transport and Traffic management centres(TTMCs), again because of ease of siphoning money. Much of the space in these TTMCs is then rented out to private parties rather than fulfilling a public interest and cause. Money is definitely available for stepping up the bus transport system.

Miniscule attempts are being made to make Bangalore bicycle and pedestrian friendly. This is again a solution to mobility that costs a fraction of the mega infrasturure projects, and therefore only lip service is done .This is the crucial aspect of last mile connectivity, without which investments in the mega projects and even in public transport, yield little overall results.

This is very much in the news in Bangalore now. However it must be acknowledged that any movement forward in this is again because of citizen intervention through Public Interest litigation. However the current approach needs a relook and intensive action in a few directions.

a)There is no overt acknowledgement that there is a garbage mafia operating, modality being purely in overestimation and over payment of tonnages of gabage.The indicated number of 4500 tonnes/day is nowhere close to scientific estimation of around 2500 tonnes.

b) The contractors and BBMP have not done what is contractually required of them in terms of landfill management. While landfills close to habitation is an issue , most of the issues at current landfills ,has  been because of the insensitive and criminal way that landfills have been maintained( or not maintained).

c) Segregation is a solution, but this is a very long term one, which involves behavioural changes in the citizens of Bangalore .Even with segregation at source, unless the garbage contractors , are brought under rule of law and penalised heavily for remixing the garbage ,the required end result is cannot be achieved.

d) A comprehensive relook, including an aggressive adoption of suitable alternate technologies, like waste to energy systems (WTE) is required.

e) An enquiry is required into the tendering system and specifically the last tendered contracts.

Bangalore is a destination for many from all walks of life, to eke out their livelihood. The more fortunate and qualified get into good companies .especially IT companies. These companies in turn, have good training programmes to fill the gap between our education system and actual employability.

But this leaves out a huge number of youth, with aspirations, but who are in turn “unemployable” on skill and educational considerations. In Bangalore, there is a real risk of what is called the demographic dividend, turning into a nightmare. The social upheaval that can be caused by these unfulfilled aspirations and the growing disparities are already seen in Bangalore.

While an overall change in the education system is definitely required, what Bangalore needs is a focussed effort in vocational education, from self-employable skill based education to a company employable skills.

v) Urban low-cost housing for poor and permanent and humane shelter for slum-dwellers.

vi) Quality healthcare for all by drastically improving the government hospital facilities and making available the required resources in these hospitals.

vii) Significant improvements in markets – so that the growers get a good price for their produce, and the consumers have an easy access to their products without unnecessary involvement of middlemen (which will ensure control on price rise).

We will do the following, if we are elected as MPs:

1. MPLAD funds will be spent in a transparent manner, with the following process –

– Spending areas will be decided after open discussion with people in my constituency.

– We will do a social audit to measure the impact after implementations which will be available online.

2. Commitment to set up Lokpal in Karnataka in its pure form as advocated in India Against Corruption(IAC) movement

3. Commitment to implement Swaraj in Karnataka and Bangalore and involve citizens in governance

4. Karnataka is blessed with citizens action groups like B.Pac, I paid a bribe, Janagraha, Citizen Action Forum, CIVIC, BRACE, Janagraha, Hasiru Usiru, Jan-Sangram Parishad, Environmental Support Group amongst many others etc., We will use the current Eco system to identify and address basic civic issues as well as remove corruption.

5. Ensure proper execution of all provisions of RTE across Bangalore and ensure all under-privileged children get an equal opportunity for education.

6. Commitment to reduce crime in Bangalore to be achieved through investment in police force, sensitise the police force to be more compassionate to citizen’s needs, paying the police force decent salaries for dignified living, etc.

7. Commitment to recover all encroached properties and using them for the well-being of the general public.

8. Commitment to restore all water bodies (lakes and wetlands) to the original position.

10. Commitment to ensure proper drainage in all areas to ensure there is no flooding in any part of Bangalore.

11. Commitment to bring transparency in allocation, deployment, usage of all Government  funds and make public all tender details, status of projects and execution/quality standards and penalties on not meeting them.

12. Commitment to ensure execution of rainwater harvesting across entire city and availability of clean drinking water across all taps.

13. As a friend of farmers, I will strive to work towards providing necessary water storage and irrigation facilities. Through this, and by implementing effective education & vocational training facilities in the rural areas and through the generation of self & other employment opportunities for rural youth, will reduce their migration to cities like Bangalore thereby reducing the congestion and civic issues in cities.

14. Commitment to ensure beautification of city, expanding greenery of city and restoring it to Garden City.

15. Commitment to enforce all buildings in Bangalore to be Fire safety norms compliant.

16. Commitment to address all the civic issues impacting citizens as stated in the earlier paragraphs.

Overall, I will work towards maintaining and enhancing the brand image of Bangalore, making it a highly pleasurable city for living, working, studying, playing and entertainment. I will strive to work together with all sections of people to make sure Bangalore retains its tag line of being the “Silicon Valley of India”.

D K Suresh, a two-time MP from Bangalore Rural, is contesting on a Congress ticket from the constituency again. Suresh’s performance in parliament this term was above average. However, his assets have also spiked over the last five years

All you need to know about Ward 151 – Koramangala

If you are a voter of Koramangala ward, here is all that you need to know about your ward: Who is contesting, what are the problems, what has BBMP done about it in the last five years.

“We can have a clean city”

Join Saahas campaign and come out on the streets and participate; not to sweep the street but to influence and change minds and have a clean city.