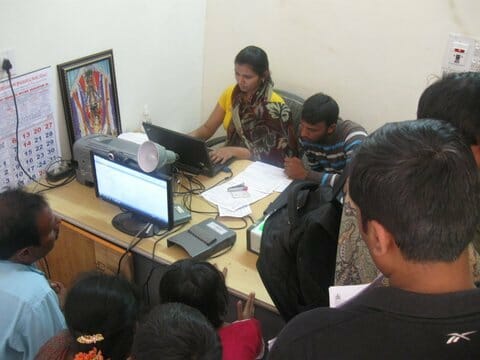 Aadhaar card, though has been challenged in various courts, is still considered as an important identity card by many. The queues in Aadhaar enrolment centres are a testimony to this.

Aadhaar card is not mandatory, according to Unique Identity Authority of India (UIDAI). Now that the Supreme Court has given an interim order banning making Aadhaar compulsory to avail government subsidies, the demand for Aadhaar card should go down – but that’s not the case.

All subsidies, including LPG subsidy, are meant to be for poor people. Interestingly, LPG subsidy is claimed by all, including the affluent for whom shedding Rs 4,500 extra per year is not at all a big deal. Most people want Aadhaar card just for this purpose.

Citizen Matters spoke to some people in the upper income bracket, to understand why they want Aadhaar card. Here’s the reaction.

Jayalakshmi Venugopal, an IT employee in a private firm, has applied for an Aadhaar card in the month of September. She has applied for the card because she wants to get the LPG gas connection at a subsidised rate.

“I have not been told by the my gas supplier to submit my Aadhaar card details. It is a matter of time before it becomes essential. Cooking gas is also becoming expensive. I presently pay Rs 420 and it will cost Rs 900 in future. Despite the Supreme Court saying it is not mandatory, the government and many organisations are still pressing for it. So as a citizen, I want to be on the safer side,” she says.

Ramanthan Thiagarajan, Finance Controller in EASi too recently applied for an Aadhaar card after hearing that it will help in getting subsidised LPG cylinders. “This is the prime reason why my entire family has applied for the card, because I have heard that the gas agencies are linking subsidy cash payment for domestic LPG up to nine cylinders per year. Otherwise I do not see any other importance of the card. However, so far, we have not been asked by anybody to give our details,” he explains.

Sona Dronamraju, a consultant in Tech Mahindra, says that the family has applied for Aadhaar card in May 2013, after they got to know of the subsidies available, especially on LPG cylinders. The family did not apply for the card earlier because of long queues in enrolment centres.

But isn’t the subsidy meant for poor?  Sona has an argument for this: “Despite the fact that we are in the higher tax bracket, we are paying taxes to the government. So when we are paying taxes, why not take the benefits? When it comes to paying we are sincere, we should also be entitled to the benefits,” she adds.

While most people are applying for Aadhaar card voluntarily, there are some who are forced to do so because their gas supplier agency has asked them to do so.

Ravee N K, a resident of Alur, says that he applied for Aadhaar card in November 2012. His wife has applied six months back for one. Last week, his LPG supplier called up and informed that they had to produce their Aadhaar card and bank details.

“I feel that it is better to apply for all government cards, because you never know when it is required. I was earlier against Aadhaar card, but how much can one resist. Even though the Supreme Court has said it is not mandatory, the government is wanting to pass a bill in the Parliament to make it mandatory,” he says. He is a retired Finance Director from HP.

There are some people who see Aadhaar card as what it is actually – an identity document. Neelesh Salgaonkar, an IT professional, says that he brought the forms for his family because it is an important identity document. “No one in particular has asked us for the card and I do not think it is mandatory too. I look at Aadhaar as a social security number, like it is in the USA. So as an Indian citizen, it should have a national identity. The Ration card and passport are only limited to some sections of society, while Aadhaar is for all.”

He adds that the government incentives are for the needy and in future it could be leveraged by the government and private industries, alike. Neelesh says that there are no immediate benefits of Aadhaar. Unless every citizen is covered in it, it is too early to see the implications. The biometrics can be used later for Visa and passport verifications. The government is also not fully sure of all the benefits it can have.

Dhanalakshmi Kandaswamy, a MarComm manager, says that she is not losing anything by not having an Aadhaar card. “I look at it as another identity card, a card to avail public services in future and for bank transactions,” she adds.

Akanksha Melhotra, an associate consultant at Ogilvy Networks, says that she and her husband have applied for Aadhaar. “We want it because it is mandatory for bank transactions. Even though the passport and driving licence are sufficient, private banks are insisting for it. It is gradually becoming an important identity proof. So we have applied for it, before it becomes too late.”

‘Safety not a great concern’

Jayalakshmi points that safety is secondary in India. “When you are living in India you are bound to take risk. Banks also have your details and they know how often you shop, for how much and where. Details of people are floating around everywhere. It is a risk everybody is taking. For LPG connection, government is giving the facility to open a separate bank account, so the fear of losing money is ruled out. I don’t see any other risk associated with it, because the details are being collected by government-hired agencies for the government,” adds Jayalakshmi.

Ramanathan is well aware of the fact that Aadhaar cards are being issued to all residents including illegal immigrants. He is worried of the manner in which information is collected by private agencies. The safety measures adopted by the agencies to monitor the effectiveness by UIDAI, is also worrying, he says.

Ravee says he is sceptical about the LPG consumer number being linked to the bank account. “I wonder what is the guarantee that nobody will clean up my bank account. When income tax details can be leaked, details of any organisation can also be leaked. If you are a part of 1.2 billion people, privacy is the first casualty. Privacy is a big joke in India,” he explains. He says Aadhaar is not the sole cause of worry, as nowadays biometric details are collected by RTO for driving licence and for property registration.

He also feels that Nandan Nilekani, chairman of UIDAI, is a very smart person. He would have definitely thought about the security and safety aspect, he says.

In a nutshell, there seem to be two kind of people among affluent who want Aadhaar card : Those who want to go for Aadhaar just for the sake of availing subsidies, and those who see it as an important identity card despite court cases. Most people are able to see that the safety risk involved in revealing details to get Aadhaar card is present even in other forms of id cards.

How to link Aadhaar card to bank account and LPG connection?
Demanding Aadhaar to provide govt services is contempt of court: UIDAI petitioner
Everybody wants an Aadhaar card. But why?
Getting a new cooking gas connection