The fruit and vegetable market at Nagarthpet. Pic: Aruna L

I had a sneak peek into old Bangalore through a heritage walk organised by www.unhurried.in and I am so glad that someone is taking the initiative to let us all know about the heritage of the city we live in. I had heard of such walks in the temple town of Madurai, which is basically for foodies, but I could not be part of it when I went to Madurai. It is great that something like it has started in our own sweet little Bangalore.

There is so much to Bangalore that we are not aware of. And we need to be, so that we leave behind a better Bangalore. Our ancestors have given us so many things and we should protect them.

The walk started with the history of the Kempegowda statue opposite Badami House. Kempegowda is the architect of Bangalore; he had so much forethought, none of which is being followed by our BBMP today. If you look at the history of Bangalore, each area had a lake which was supposed to take care of the water requirements for that area. Around 20-25 years back there was no water scarcity in the city.

The Cubbonpet Market area too had a lake called Sampangi outside the fort; this is a small well now. To the east of the pettah was the Sampangi kere on which the Kanteerava Stadium now stands. In the name of modernisation we are killing the backbone of our city. The entire city area was once a fort; the fort is no longer there, but remains of it can be seen in the form of a stone compound.

The Unhurried folks spoke about the different gates of the fort, none of which can be seen now, with the exception of the Halasuru gate. There is a Martyr stone in Banappa park, which is laid in memory of freedom fighters who gave up their lives during the freedom struggle; this doesn’t have their names, but the names of the people who inaugurated it. Long live our great freedom fighters who lived and died for others.

We went to a small, yet wonderfully designed vegetable and fruit market in Nagarathpet; this is one of the markets that the BBMP plans to raze down. It was originally designed by a German architect. It is really beautiful, but not very well maintained. So many people can be accommodated in such a small space and it is well ventilated, using natural air and light. We should really save this from being demolished. I strongly wish we can do something about it. 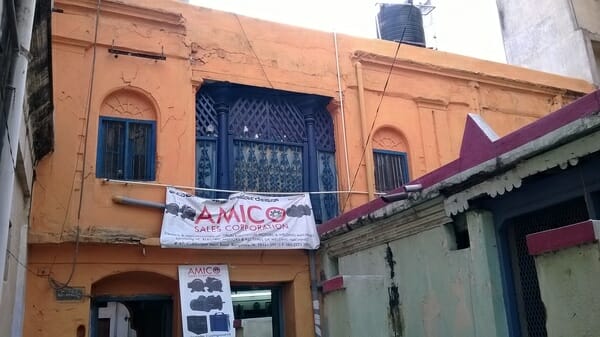 There are a lot of old residential buildings and the design really amazes you. They have old wooden planks with madras roof consisting of thin bricks placed at 45 degree angles. The buildings are still standing strong even after 100+ years. I had the opportunity to see many of them, and there is still more to be explored. 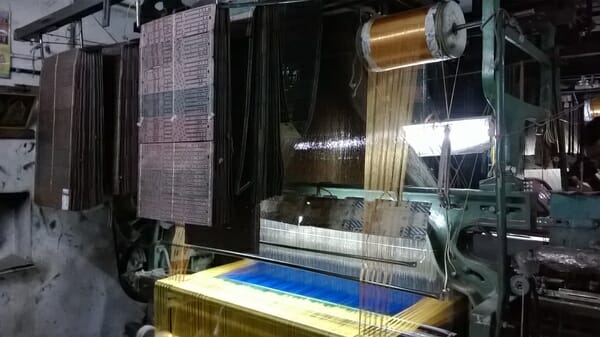 We saw series of silk saree manufacturing units in Cubbonpet, where we could actually see sarees being made using machines. I never knew so much of work went into making a silk saree. It takes around 8-10 hours, I believe, to do one saree. They are all mechanised, with designs fed into the computer, and yet human intervention is needed. There are mills with punch card machines too. I am also happy to note that so many people are still doing their part in preserving heritage. I trust they will continue to do it as long as they can. We did manage to take pictures in one of the units too.

We visited an eatery whose owner was supposed to be selling in carts and has now opened a hotel which sells good stuff at a very high cost; this is what I felt. But it is worth every paisa you pay. The food is tasty and well made. Even the people who served us were smiling and answered all our queries so nicely. It looked like the food was made with a lot of care, due to which they demand a higher price for it. Over all, it was a very nice place and was very well maintained. I also heard that one hardly find space to sit in the evenings.

The current Jumma Masjid was a rocket making factory during Tipu Sultan’s time. There is a small stone wall which seems to be old and from Tipu’s era. I only saw it from the outside. It is like an open courtyard and its name is Taramandal. It is quite a large area though it looks small from the outside.

We visited Raja market which was designed by an Indian architect. Never have I seen such beautiful, yet modern design. It can compete with any modern mall and win if it is renovated properly. People just use the area without any care about its well being. You have well connected corridors with open spaces facing the sky for natural ventilation. There is no need for any A/c, when you make use of the natural air and light. It also has exit gates on all four sides, which makes for easy for movement of people.

There is a Bengali mess right opposite the Jumma Masjid. They have a small shop selling sweets, next to it a kitchen and a hotel besides that; all this in a space of around of approximately 30×80 feet . It doesn’t even have a name, still I guess a lot of people visit it. We didn’t taste anything there though. The owner was very enthusiastic about sharing his knowledge about the menu, but I barely understood, as it was all in Bengali mixed Hindi. I guess there will be many of such eateries which need to be explored in future walks.

We got to see a flour mill too, which is unheard of these days, considering readymade flour is easily available. Long live flour mills and our tradition of getting flour ground there. I trust all those who are health conscious, will help in preserving these mills by making use of them, as our ancestors did.

We visited the Dharmaraya temple which was at the end of the walk, and as always it was very calm and peaceful. There is a powerful energy which makes you want to sit there for a while at least. It doesn’t have any pomp and show, so you feel at peace while sitting over there. It has a fortress kind of a wall built around it, which is typical of most temples in India. Though it has been renovated, the charm of the old temple is there. There is a big prangana outside the temple which can easily accommodate 500 to 800 people. The kalasa and nandi stamba are there in the open corridor inside the temple. I have always wondered why there kalasa is there at the top of the temple gopuram. If anyone knows the significance of the same, kindly respond by commenting. It is a temple built by Tigala community. That is where the famous karaga festival is held every year with great enthusiasm and devotion. Unlike other temples, there are 5 idols in the temple and the garbha griha is also quite lengthy.

Read: During the festival… 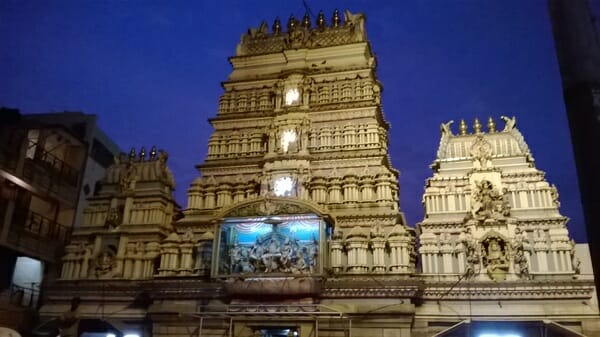 We saw an old Garadi (Akhada) where people do traditional body building and wrestling. It is over 100 years old. It was closed by the time we went there, but I could see that the building is still well maintained.

The last stop was another sweet shop at the end of Nagarathpet. This too has been around for a very long time. All sweets are very good. People frequent the place for traditional Karnataka sweets like Peni, Chiroti, Obbattu and Damroot, all of which are traditionally served at weddings. In the past, if someone was serving Chiroti or Peni oota at their child’s marriage, they were considered well-off. Nowadays, we rarely hear of these sweets at a wedding, with everyone resorting to plate meals and stuff like that.

I hope more people attend these walks and understand that it is important to preserve our rich cultural heritage. I am sure I will be part of more such walks to share my experiences on the same. I would really encourage people to take a keen interest in preserving the heritage of our beautiful city by attending such walks. Long live Bangalore’s good old culture and heritage!

This article was originally published in Aruna’s blog and has been republished here with minimal edits.

About Aruna L 1 Article
The author has not yet added any personal or biographical info to her or his author profile.

Sights and sounds at Yediyur Lake

A visit to a lake at the center of Bengaluru city unveils surprises. Deepa Mohan documents it all.

Political groups and anti social elements who are used to damaging public property have another beautiful target.