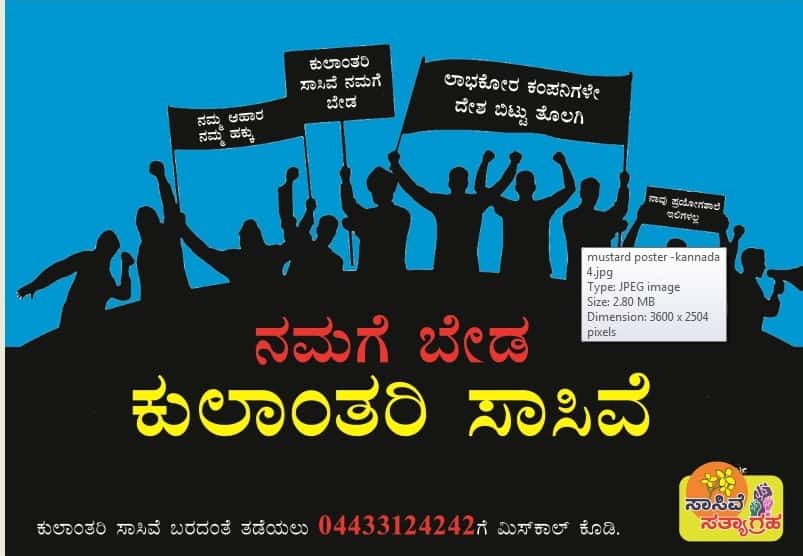 GM-Free Karnataka and the Karnataka Alliance for Safe Food have announced a ‘Sasive Satyagraha’ event in Bangalore on October 2, 2016, to be held at the Gandhi Statue at  Anand Rao Circle, Bangalore from 10:30 a.m. to 4 p.m. This is primarily a citizens’ awareness and call-to-action campaign to protest against the approval of the commercial release of genetically modified varieties of mustard (GM Mustard) in the country.

The fight against genetically modified food has just been revived with renewed vigour around the country, with activists and experts raising strong opposition to the introduction of GM Mustard. The commercial cultivation of GM mustard in India could soon be approved by the Indian government, especially after the publication of a report, “Assessment of Food and Environmental Safety for Environmental Release of Genetically Engineered Mustard (Brassica juncea) hybrid DMH-11.”

A note published on the website of the Ministry for environment Forests and climate change confirms that the Centre for Genetic Manipulation of Crop Plants (CGMCP) in New Delhi has applied for the approval of the environmental release of three genetically modified varieties of mustard to the Genetic Engineering Appraisal Committee (GEAC).

A petition on change.org which has already garnered signatures from 18,386 supporters (and counting) raises the most frequent concerns of those against the approval of the three GMOs. For one thing, it is felt that once GM Mustard is approved, it will only make the way smoother for the introduction of many more GM food crops – maize, rice, jowar, wheat, brinjal etc.

The health and environmental impacts of genetic modification have long been suspect among a large section of society and the petitioners in this case too believe that the negative effects of GM mustard have been suppressed. To lend strength to their argument, they point to the fact that even the major mustard growing states of  Rajasthan, Madhya Pradesh, Punjab and Haryana have said no to experimental trials of the GM crop.

Meanwhile, organisers of the Bengaluru rally, too, have come out vociferously opposing GM mustard. They have released a detailed 8-point rationalisation of why all citizens should staunchly protest its commercial release. The objections raised by them are as follows:

The Coalition for a GM-free India also points out that the biotech regulator GEAC has not cleaned itself of conflict of interest, with one member from the GM applicant team also being a GEAC member. Test protocols were prescribed by the crop developers themselves.

Meanwhile, data is shrouded in secrecy. Test results have not been shared in public despite orders from the Supreme Court and the Central Information Commission that require the regulators to put out data for public scrutiny.

It is in view of all the above that the Karnataka coalition has urged citizens to join in the Sasive Satyagraha event scheduled. It will be a one-day protest led by the Karnataka State Farmers Association – KRRS (Karnataka Rajya Raitha Sangha) marked by day-long fasting by the gathering.

There will be a poster exhibition on the hazards of GMOs in general and in particular GM Mustard, along with a display of different varieties of Mustard grown in the state of Karnataka.

At the end of the event, a delegation will go the Chief Minister’s office with a memorandum to be handed over to the CM urging him to act on behalf of the citizens (farmers and consumers) of Karnataka, asking the Prime Minister to ban GM Mustard and stop its commercial release.

A ‘missed call’ campaign is also underway, where citizens can register their protest against the release of the crop by dialling the number 044-33124242.

Learning for Bengaluru from Manchester and Bradford master plans

Problems faced in Manchester and Bradford are similar to that of Bengaluru, the difference is in the scale? What can the city learn from the planning process in these two England cities?

A workshop on varma kalai not only helped the audience understand its principles and nuances, but also left them spellbound.