I answered the doorbell a few weeks ago to a blue inland letter. Selvaraj thatha, the resident guardian of my building smiled gummily at my furrowed brow as he handed it over. Late night online impulse purchases ensure a steady stream of parcels that thatha receives on my behalf, but an inland letter was a novelty and he was curious to know what had occasioned it.

I gingerly eased open the letter and found that it was from my library. Among other things, the letter said that the good folks at Eloor library, Bangalore were looking forward to seeing me again, and that the letter was “reminder no: 01” to return five books that were long overdue. “Are you in trouble?” thatha asked. “Kind of,” I replied.

Truth be told, I was charmed with the anachronistic inland letter with which my library had reached out to me. It was in line with every reason why I am unable to displace libraries and books from my life in favour of their digital avatars; a Kindle I was recently gifted remains unopened. So, I found it entirely appropriate that in the time of one touch-one day deliveries, it was a library that persisted with postal mail to discipline its errant patrons. This, even as the present forever thirsts with its perennial demands to sync to the latest, or else.

As a concession to the times, Eloor uses RFID readers to track books as they journey to and fro from its shelves, but that is the only sign of it being in the 21st century. In everything else, it allows me to experience my childhood that was largely spent trooping in and out of the Albert Edward Library in Pune Cantonment.

Similar to my library days of yore, the librarians here too issue a paper receipt with the amount that I owe. I march with it to the payment counter, always feeling slightly doubtful about my wallet’s potency. You see, cash only. Needless to say, I am now well acquainted with all the ATMs in the vicinity. The very first time that I ever attempted a signature was on a library membership card, and it largely remains the only place where I continue to need it, as I sign with a flourish on loose sheets held together by a clipboard for the books. That done, you are set, but not before you stop by the door to get the due date stamped on every book. Lest any of this appear as hardship, rest assured that it is not. It is an integral part of the library experience and I would miss these little ceremonial flourishes if the library were to do away with them.

I am no Luddite. Indeed, I make my living studying the digital, but ever so often, I find myself seeking experiences that are not mediated by screens. For this reason, visits to libraries have long ceased to be merely about books. It is a ritual that permits a ready backdoor escape hatch to a way of life that was once familiar. It is a life where grimy fingers make you happy. They come from running your fingers over rows of books and thumbing through their pages. It is the kind of life that taught you about recognising and knowing intimately the touch and smell of paper and how the two vary as they age. The library way of life is about greed and temptations. And dialogues with the self on the desirability of seizing the moment:

“Can I really get through all these books that I am issuing?” “Likely, no.” “Okay, but what if I don’t find them again?” “Good point.”

Inevitably, greed wins. And the seeds of yet another overdue reminder are sown.

Libraries are about making time. To read, yes, but also to sometimes aimlessly browse. Being a regular at a library or even a second hand bookstore is about appreciating serendipity – you never know what you might find. Sometimes, I don’t even progress beyond the front desk where the just returned books are precariously piled, and many of my happiest finds have come from rummaging through these unsorted heaps.

When I first moved to Bangalore a couple of years ago, it is the city’s libraries that did their bit in ensuring I made time to discover the city. I felt the urgency to find a library as soon as I had found an apartment. So one weekend armed with leads gathered from local Facebook groups, postal addresses from Google, and my phone on full charge with Google Maps leading the way, I set off on my Scooty driving through unfamiliar roads, learning about one ways, and running circles around confusing roundabouts. Eventually, through a combination of GPS assistance and nudging stellar auto drivers awake from their afternoon naps, I found my way to three libraries in different parts of the city. Now, happily ensconced in one, it ensures that I have time to stand and stare. At books yes, but also the way the sun filters through the shelves on late Sunday afternoons to create patterns of light and dust. As good as the Kindle paperwhite is, it will be hard put to live up to the romance of this light. True, yes?

Mostly though, library visits are tantamount to holding happiness in your hands. The heft of the books that nestle in your arms and the delicious anticipation of soon losing yourself within their pages. Sometimes, it is about reading much more than the books themselves because they often come bearing the stories of those who picked them before you did. 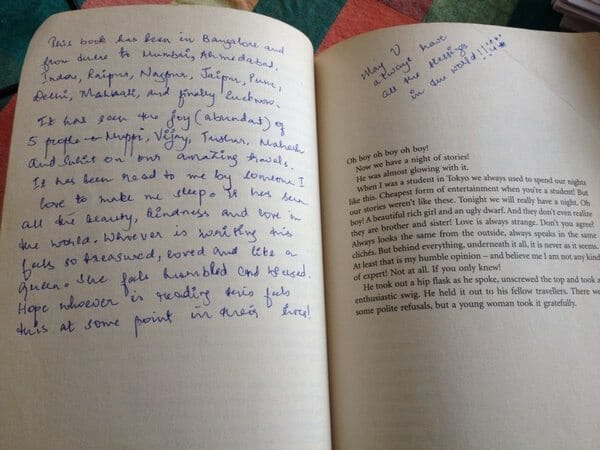 This picture, is of one such story that came my way. Like the blue inland letter, this one too is the kind of communication that comes bearing with it a whiff of whimsy. Found only in libraries.

About Preeti Mudliar 1 Article
The author has not yet added any personal or biographical info to her or his author profile.

BBMP Commissioner Manjunath Prasad talks about his experience as a bureaucrat, his work at BBMP and BBMP’s plans to streamline finances and land records.

It appears that BBMP only seeks to get deeper into the bad books of citizens. This is another example of a decision gone wrong.

Do you know what the two main modes of urban public transport are? Or how Right of Way (ROW) operates in these systems? Professor Ashish Verma of IISc explains these in the Bengaluru context to highlight potential efficient solutions to the city’s traffic woes.