A few months ago, there was this news item about a bride who prevented 137 kilos of wedding waste from ending up in a landfill. It was heartening to read it, for two reasons. One, even in these days of pomposity, show and fanfare, there are some who have genuine concern for the environment, and think about wastage, garbage and the like. The second reason for my happiness was a sense of pride, since our own family had pursued this initiative just a few weeks before.

Yes. In October 2015, we had arranged a luncheon get-together, to celebrate the wedding of my son. Every member of our family was unanimously against a ‘big fat reception’, preferring a low key, simple event. The luncheon was arranged at Woodlands, a popular, 70-year-old hotel in Bengaluru, well known for its service and cuisine.

We printed only 80 hard copies of the invitation card, for the benefit of those without online facility or knowledge. The printed card was also a single sheet of art paper, rolled into a scroll and tied with a ribbon – novel in appearance, and also saving on expensive and elaborate cards and associated envelopes. The rest of the invitees got their invites through e-mail or WhatsApp.

Since Woodlands was known to serve food on plantain leaves only, the problem of using styrofoam or similar undesirable crockery did not arise. However, we had to have many discussions and parleys with the management on the subject of not using plastic in any way. This was particularly applicable to serving water in reusable tumblers, instead of in plastic/paper disposable tumblers or water bottles. Finally, they agreed to serve water in reusable tumblers, provided we supplied the same.

Most unexpectedly, this subject of tumblers assumed gigantic proportions, and almost became a challenge to our intentions!

Today, with the plastic demon reigning all over the place, it was a Herculean task to locate a source renting out said tumblers! Why would anyone run a business where there is no demand? At last, we managed to find RNR in Chamarajpet, where we could hire tumblers – steel, or what they called, fiberglass. The latter looked more ‘appealing’ than the steel ones, so we hired the requisite numbers, with a big sigh of relief!

Alas! How true is the saying that looks are deceptive! As a result of being unused and/or not being cleaned for long, the tumblers had a fair amount of dust and muck stuck inside them – all hundreds of them! On the eve of the event, it took six of our family, all of three hours, to clean the tumblers properly, dry them to prevent more accumulation, and remove the strands of cloth fibre adhering to the frayed rims of the ‘good looking’ tumblers! Crisis management at its peak!

The get-together went off very well. There were no ostentatious decorations to adorn the hall – few bouquets at the entrance, some colored cloth embellishment. No thermocol artwork, no plastic buntings, no plastic floral extravaganza! Whatever food was left over, the hotel gave to us, packed in containers that we had taken, with a good amount of anticipation and forethought. 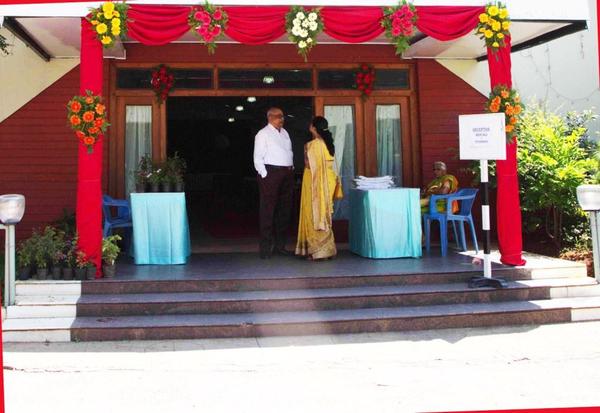 The entrance to the hall. Pic: Pranav S Krishnan

No tale is complete without a villain! Quite unobtrusively, the plastic devil had sneaked into our scheme of things, despite all our meticulous plans! Horror!

The attractive malai sandwich was kept in front of all of us in dainty plastic cups, with plastic spoons! If only we had known about this earlier, we could have hired hundreds more cups, and dedicated another three hours for cleaning them! We had to accede a small victory to our ’enemy’, and swallow our defeat by relishing the delicious savory!

We do not also know how the hotel staff disposed of the used plantain leaves wrapped in the paper backing! We hope they do have a proper segregation and disposal system for the waste.

Instead of the usual traditional tamboola, we had arranged for plants to be the parting gifts. This concept was instilled in us some years ago by Gopal, my son’s friend, during his marriage. I hope that his married life is prospering as healthily as the jasmine plant we got on the occasion is blossoming in our garden. 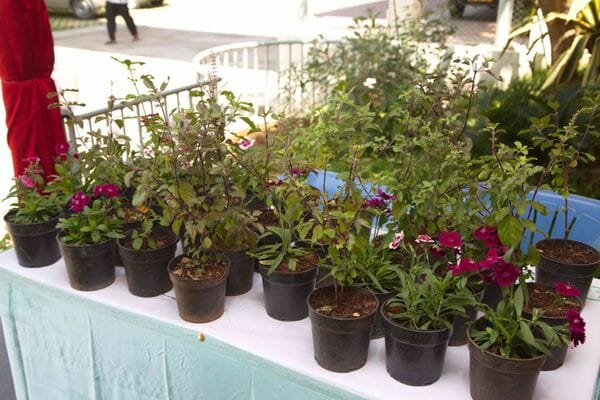 Plants were handed out as giveaways. Pic: Pranav S Krishnan

For our event, Indo American Hybrid Seeds supplied an assorted variety of saplings, consisting of flowering plants, and also medicinal plants like aloe vera, doddapathre and tulasi. It was gratifying to see that this initiative was an instant hit with our guests, who vied with one another for the plants of their choice! Cloth-like woven carry bags were provided to carry the plants safely. 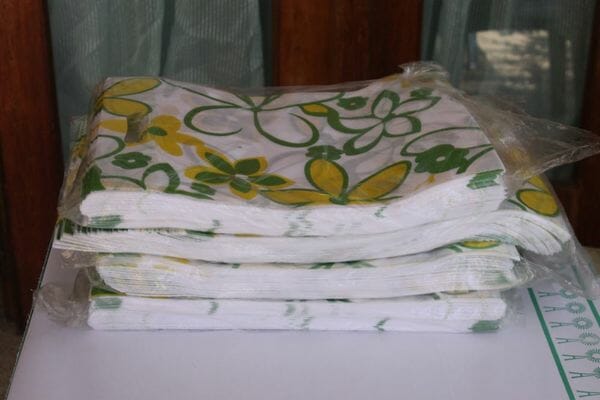 The carry bags that were given out. Pic: Pranav S Krishnan

Paper bags in the required size were not available easily and, and cloth bags turned out to be more expensive than the saplings. I hope there is sufficient demand for cloth bags, making them more affordable. Some of the invitees who could not attend the function even approached me later, and picked up some leftover plants from my house!

The advocates of ‘big fat weddings’ and ‘Band Bajaa Baarats’–if they condescend to read this at all–may smirk and snort at our small effort! Well, all good acts have their critics, detractors and dissenters. What we had done was certainly not a big crusade, but a small beginning, a miniscule contribution.

I learn that a Minister’s daughter also adopted a similar initiative during her wedding. It is very encouraging, because these are people who are taken as role models, and are expected to set examples for others to emulate. It is heartening to know that many groups, welfare associations and organisations have started tackling this issue, in their own ways.

If more and more people join the clarion call of ‘Garbage Hatao’, Swachh Bengaluru, and Swachh Bharat, will be a reality, and not just a slogan! Treatment of garbage is not a solution; prevention of garbage generation is the right cure for this malady.

Just as little drops of water make a mighty ocean, little lumps of litter lead to large loads of garbage!

We have opted to be the little drops of water. What about you?

About Gadadhar Prem Kumar 2 Articles
The author has not yet added any personal or biographical info to her or his author profile.

Charting a safe route for school children in Bengaluru

A new initiative aims to encourage school children to walk to school, and in turn be more aware about their surroundings, while staying active.

CAF members met Chairman, BWSSB and Minister in charge along with team of chief engineers.

Bescom MD P Manivannan is Namma Bengalurean of the Year