I was at RV Dental College at JP Nagar, looking for Maltesh Badiger, a theatre director and set desginer. Badiger had offered to loan me whatever I needed from his vast collection of theatre sets, for a play I was helping out with.

Badiger, a small simple man walked in. I explained what I needed and he opened up a small room in the basement. It was full of set pieces – doors, thrones, backdrops and more. He told me to choose, and I was lost. He had a solution to create any set I wanted!. When he learnt that our play was by a real young group, he kindly offered to slash the rates.

Some of the members had dabbled in theatre under Badiger’s guidance, while studying at SSMRV College, Jayanagar. After graduation, they decided to continue their involvement in theatre, forming Adhamya. Some got into a Masters degree programme, others took up a career.

But they find time after their daily schedule and assemble at the basement of the RV Dental College auditorium, to rehearse their plays. The group is now three years old and have staged plays all around Karnataka and at Mumbai as well.

A very enthusiastic group, the young members have realised that as a group, they can make a difference to society and theatre is their medium. Apart from theatre, they volunteer in social activities and help old age homes and schools to improve their infrastructure.

As I sat there, I felt I had to watch the actual show. 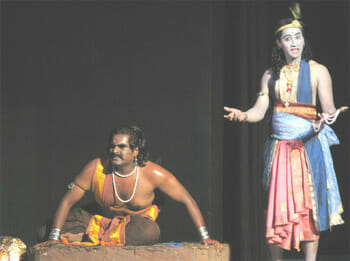 Manu as Duryodhna and Vijay as Krishna (Pic: Lakshmi Menon)

Smashana Kurukshetra, or the epic graveyard of Kurukshetra, written by Rashtrakavi Kuvempu, was the last play to be staged in the all-Karnataka “Pauranika Rangakala Vaibhava”, held in tribute to B Chennabaire Gowda. The festival was held from 16th March 2009 to 26th March 2009 at the Ravindra Kalakshetra.

The play talks about the state of Kurukshetra after the war, from different viewpoints. The first interpretation is of Duryadhana, the great warrior. Even as he was lying hurt, reliving his last moments after being defeated by deception, his valour was incomparable.

It goes on to show various people affected by the war, the common man, king Dritharashtra, Gandhari, Kunti, et cetera and at the end, we see Shiva, performing his Tandava Nritya. He has seen the end of Dwaparayuga with all the great warriors coming back to him as ashes. All their deeds, their accomplishments, their achievements did not save them and they are now dead. As he proclaims this, Krishna comes in and asks him, “How did you like my play?”

Shiva replies, “It was the most interesting play I have seen. I could not take my eyes off for even a moment. Now that you have completed this play, what are you planning for next?” Krishna then reveals that he has completed the script for the next play ‘The Kaliyuga’, which will be even more entrancing but also confusing with complicated characters and scenes very different from the last one.

Kuvempu and Adhamya left me with these thoughts… why was such an entertaining play not talked about, promoted or encouraged? How can this intelligent effort go unnoticed? Why do people find it ‘uncool’ to attend and promote Kannada theatre?

Malthesh Badiger lives in a small rented house in Chamrajpet. His home is filled with awards including the National award presented by the Sangeet Natak Academy, Ustad Bismillah Khan Yuva Puraskar 2006. Born in Sirhatti, he moved to Bangalore a dozen years ago. He has been involved with Kannada plays ever since. His wife, Chaya Bhargavi, a lawyer by profession, also prefers to be involved with theatre. She too has directed plays for Adhamya.

Badiger has directed more than 50 major productions for various groups. With his focus on social issues, he takes theatre to the masses. He chooses plays written by famous playwrights like Girish Karnad and Kuvempu and stages them in a contemporary style. A member of the Karnataka Nataka Academy, he is responsible for the Kannada theatre scene in several districts of Karnataka.

Badiger says, "English theatre has the backup of sponsors, which allows them to publicise the play."  Kannada theatre on the other hand survives on the personal contributions of the members. However, theatres like Rangashankara which are affordable for young groups, have improved the situation. Another issue is the convenience factor, it’s easier watching a movie as compared to watching a play.  He feels theatre experience should be made more popular. This is possible only if the groups try to experiment and innovate. He explains, "People need to try watching atleast a couple of plays before they decide that theatre is not their cup of tea."

Oota from your Thota in JP Nagar

Know all about organic kitchen gardening, composting and healthy eating this Sunday at JP Nagar. The event will have discussions, along with exhibition and sale of gardening materials.

Permanent solution for waste burning isn’t possible, say officials. People are desperate for some respite, and have taken to social media to seek help.