Summer’s here, and so is crisis season. Every year, officials say power cuts and water issues will not plague Bengaluru but each summer the situation remains the same. And if all this were not enough, the heat and humidity of summer bring with it its own problems. Citizen Matters spoke to government officials to find out what people can expect on the power-water front and also to some doctors on how to combat seasonal ailments. 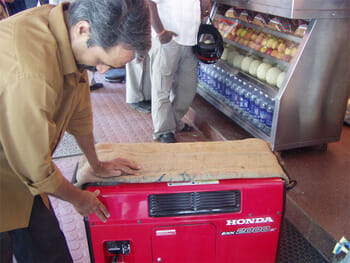 “I have to depend on the generator as there are untimely power cuts. My business is getting affected. This generator also can be only used for making juices. It does not work for the sandwich maker,” Ramesh, owner, Juice Junction, Koramangala BDA Complex (Pic: Vaishnavi Vittal)

“This is nothing new, every year summers are the same and every time we hear of a better summer next year,” says Kavita Deshmukh agitatedly. Deshmukh, who lives in HSR Layout, is a mother of two and her children are unable to study because of unscheduled power cuts throughout the day.

Residents of several areas in the city have been reeling under power cuts. This was in addition to the two-hour load shedding already being imposed. Several areas, including Infantry Road, Banashankari III Stage, Yelahanka, Girinagar, Jayanagar, Rajajinagar, Koramangala and Malleswaram are among those impacted.

Last summer, Bangalore Electricity Supply Company (BESCOM) promised ‘scheduled’ power cuts for the city (as opposed to unscheduled) but the promise remains unmet. BESCOM’s H Nagesh, Director, Technical, says, “Irregular rainfalls are the major reason for the power supply shortage throughout the state.” He further mentions that BESCOM is yet to decide on the schedule of power cuts.

Minister for Energy, K S Eshwarappa recently said that the government is buying power from other sources to overcome the shortage. Meanwhile, according to the KPTCL’s Public Relations Officer, the generating unit at Bellary Thermal Power Station had been running at full capacity for the past few weeks. Bengaluru consumes the maximum power in Karnataka and, at the same time, it generates the maximum revenue.

Last year BESCOM promised that, by November 2008, four new 220 KV substations would ensure the city had uninterrupted power supply. These four substations and four more that are in the pipeline (supposed to be commissioned in March 2009) are still being built at a cost of Rs.920 crores. These projects were launched a few years ago but, due to reasons unknown, never took shape.

With a peak load of 1650MW/day in Bangalore, there is now a supply shortfall of 15% of the demand.

The current consumption is 33 mu per day, with 11mu for domestic users. With 30 lakh connections, of which about 21 lakhs are domestic consumers, each consumer is provided 5.2 units of power per day on an average.

On an average, a household (comprising of 4 people and equipped with most facilities) needs around 14 units per day for various appliances like air conditioner, washing machine, water geyser, bulbs, tube lights, fans, television, refrigerator and computer.

Public sector oil companies say that the diesel shortage in the city is due to the abnormal increase in demand, further compounded by power cuts. The president of the Bangalore Petroleum Dealers Association, G V B Narang, says the number of people buying diesel for generators has gone up by 15 per cent in the past one month. He does not have recorded data to show, but has arrived at this figure by observing sales.

The overall sale of diesel during February has gone up by 32 per cent for Bengaluru over the previous month, according to B Ashok, Karnataka General Manager of Indian Oil and the state’s co-ordinator for the oil industry. In the past month, diesel supply to the city has been 9,500 KL, showing a growth of 80 per cent over previous year’s average sales during the month of July.

The Indian Meteorological Department had predicted cloudy weather for March with no certainty of rainfall. The temperature this month is three degrees higher than last year and April showers are expected to embrace the city by only mid-April.

Water woes continue to hassle residents. With 5.42 lakh water connections, Bengaluru receives about 870 million litres per day (MLD) from the Cauvery river. Tippagondanahalli reservoir, which has a capacity of 160 MLD, supplies 60 MLD of water now. The water level in this reservoir is about 35 ft now. We don’t have excess water, say BWSSB officials.

Bangalore currently uses 12 TMC (Thousand Million Cubic metres) of water out of its allocated 19 TMC. The remaining seven TMC of water will be used when BWSSB’s ongoing projects complete. (One cubic metre is 1000 litres or 1 kilolitre; 1 TMC is 1 Teralitre or 1 million million litres).

BWSSB is planning to increase the supply of water by 500 MLD through the Cauvery Water Supply Scheme Stage IV Phase 2, expected to be completed by 2011-12. Official sources in BWSSB say water supply to north and east Bangalore will continue to be hit till this project is complete.

Of the newly added areas under BBMP, only 20 per cent are getting Cauvery water. The Stage IV Phase 2 scheme will solve this problem, and plans are also on to supply water to the 110 villages surrounding the city, says the BWSSB official.

The 25 tankers owned by BWSSB will be used only during an emergency, says an official. But an additional 10 tankers will be added soon. BWSSB has plans to conduct campaigns in the city through street plays that will spread the message of water conservation.

Away from the larger picture, water officials are also pointing to BESCOM and their increasing power cuts as the cause for water supply breakages. Power problems and excess water usage in some houses, are some of the reasons BWSSB officials give for the water woes.

Summer is normally accompanied by illnesses that are mostly water and food related. Rising temperatures help food borne bacteria multiply and grow faster, making you prone to a number of ailments. Unsafe water and inadequate sanitation are also common in the summer months because of scarcity of water.

Viral and throat infections, allergic disorders, cholera, typhoid, amoebic dysentery, diarrhoea and jaundice can occur during this time. These conditions can lead to gastroenteritis which is the inflammation of the stomach and the small and large intestines. Most outbreaks of water-borne diseases are caused by contamination of drinking water systems with the faeces of infected animals or people.

A bit of care goes a long way

The Bruhat Bengaluru Mahanagara Palike’s (BBMP) Health Department has a joint monitoring team for inspections. This team consists of members of the engineering department, health department and the BWSSB.

Dr L T Gayathri, Chief Health Officer, BBMP, says, “Members of this team jointly go for inspections to different areas and regularly take water samples for inspection. All this is enforced more strictly during the summer.” This team looks into solid waste management and supply of clean water, too. And medical health officers have been instructed to hold weekly meetings and report problems to the department heads.

The BBMP also has help desks at their hospitals. These desks have emergency medicines, IV fluids and ORS packets which are available round the year.
⊕

The mother of all shopping malls has been bearing the brunt of incessant power cuts and bureaucratic apathy for the past 33 years. Is anybody listening?

Yesterday – Anjaneya. Today Meghala. How many more kids should die before malnourishment is tackled? Isn’t this a testimony to the carelessness of the IT city, Bangalore, towards its poor and underprivileged?