“You see this fan, ma’am? When this turns, air is sent into a compression chamber. The compressed air is then mixed with fuel that is sent through the fuel injectors and the mixture is ignited. The resultant hot gas provides a thrust for the turbines to turn.” 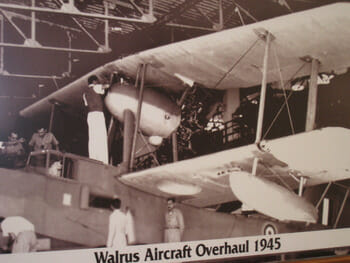 I nodded my head eagerly as Ranjan, the guide at the HAL Aerospace museum, explained the mechanics of turbo fan engine which is used in the Light Combat Aircraft (LCA) built by HAL. We were standing in front of the engine model in the HAL museum and vague memories of physics and turbine principles, learnt in college, now stirred back to life.

More heartening was the display of the indigenously produced LCA and ALHs – a very commendable achievement since the Indian aviation history dates back only to December 1940.

Hindustan Aeronautics Limited (HAL), originally called Hindustan Aircraft, was the brainchild of Walchand Hirachand, the noted Indian industrialist, who also founded Indian Shipping industry. His initiative was actively supported by the Dewan Mirza Ismail and he was given the necessary land and permission by the Mysore Kingdom. Thus Bangalore became the seat of aviation for our country.

Hindustan Aircraft was set up in December 1940 to serve the Royal Air Force and during World War II the factory was used for overhauling and maintenance of the Allied aircrafts. Post Independence, it was officially handed over to the Indian government and Hindustan Aircrafts became Hindustan Aeronautics Limited.

Thanks to Walchand Hirachand’s initiatives in the 40s, today India is one of the foremost in the maintenance and development of military aircrafts. HAL has 13 production divisions, 9 research centres and a dedicated division for Indian Space programme. Kuppuswamy, the manager at the HAL museum enlightened me that HAL is ranked 35 among the top 50 aircraft manufacturing countries in the world.

In the forties, HAL was used as aircraft maintenance base for Allied aircrafts during World War II. During those times, many US aircrafts were brought to Bangalore for repair and overhauling. Photographs of the Walrus, Catalina and Perceival Prentice decorate the walls of the museum.

He was offered a job in the Argentine Aero Technical Institute and he continued his professional life here. Krishna Menon had heard of Dr Tank and India was keen on producing its own aircrafts. When the Peron government fell, many of the German engineers migrated to the US. Krishna Menon persuaded Dr Tank to come to India instead.

Dr Tank, with his team of 13 German engineers, along with their Indian counterparts developed HF-24 Marut, a twin engine fighter bomber designed to reach supersonic speeds. It was fitted with two Bristol Siddeley Orpheus BOr.12 engines and later by the Orpheus 703 engine. HAL constructed 147 copies of HF-24.

India, with her policy of non-alignment during the cold war, had close ties with Egypt. With the success in HF-24, India entered into an agreement with Egypt that she would provide the fighter aircraft for which Egypt-produced engines would be fitted. It’s even said that Dr Tank’s daughter test-flew these planes. Somehow, this venture did not go any further.

For any aircraft, the most important part that also plays a crucial role during combat warfare is the engine. HAL’s sister concern, GTRE, earlier known as Gas Turbine Research Centre, moved to Bangalore from Kanpur in 1964.

One of its first projects was to improve the power of HF-24 Marut aircraft. The engine research team for improving the Orpheus introduced an afterburning system that provided improved thrust.

The road that connects old Madras Road to old Airport Road (parallel to Indiranagar 100ft road) is named after him. A driving force behind the HF-24 follow up versions, his death put a stop to the project.

While Marut was HAL’s venture into military aircraft, its very first aircraft was HT-2. Designed by V M Ghatge, it was first flown by HAL’s ace pilot, Capt Jamshed (Jimmy) Munshi, in August 1951. Many photographs of the HT-2 aircraft are displayed in the museum. Its maiden flight, photograph of Ghatge with visiting dignitaries, politicians, industrialists are displayed in the 1940-1950 era.

The HT-2 was one of the earlier aircrafts that was fitted with a piston engine. With the advent of turbine engines, the aircraft was replaced by other versions that ran with a turbo jet engine.

After HT-2 and Marut, Indian aviation research had been quiet until the advent of ALH, LCA and the indigenously built Kaveri engine for the LCA.

Aviation technology, from the time of Wright brothers, has come a long way. Engines built for airplanes had to produce plenty of power while remaining light in weight. In the quest for faster and better machines, the engine too has seen many technological changes. Broadly the engines can be classified Piston Engine and Gas Turbine Engine.

Until the world wars, most of the aircrafts used piston engines. In this type, the engine uses pistons to convert heat into rotating motion.

The engine contains a combustion chamber in a cylinder where air and fuel is mixed. The resultant hot gas pushes the piston down the cylinder. The piston moves up through a flywheel. The linear movement of the piston is converted to rotating movement through a crankshaft.

The principles are used in all internal combustion engines from automobiles to aircrafts. Pratt & Whitney R-1830 engine in the Wasp and R-1690 in Hornet were two of the most successful piston engines.

The advent of turbo engines towards the end of the World War II. They work on the principle of Newton’s third law of motion – ‘Every action has an equal and opposite reaction.’ The basic working of the engine is as simple as the principle.

Air is taken in from an opening in the front and compressed. The compressed air is then sent to a combustion chamber which has several fuel injectors. The fuel is added to the air and burnt.

The resultant hot gas is passed through a turbine which converts this kinetic energy to mechanical energy. The turbine thus drives the compressor. Some extra pressure at the turbine end is sent through a nozzle to produce a high velocity of gas (similar to the water spray from the thin nozzles of the fountain). This produces a thrust, pushing the plane forward.

Increased requirement to produce more thrust for the same engine made the scientists introduce another combustion chamber positioned after the turbine but before the nozzle. It is called the afterburner or reheat of the extra gas. This resulted in more thrust.

In today’s world, there is a need for increased speeds but with efficient fuel consumption. This contradictory requirement yielded to yet another improvement to turbine technology.

Here, a portion of incoming air is mixed with fuel and ignited to produce hot gas. The extra air bypasses the combustion chamber and is sent directly to the turbine. The mixture of cold and hot gas provides more thrust but with less fuel consumption.

This technology is used in turbo fan engines. Though the principles are quite simple, the development and testing of a new aircraft takes a long time.

Know more about Indian Aviation at

If developing an aircraft on the lines of aero dynamics principles takes five years, developing an engine from scratch, takes 15 to 20 years, explains a senior scientific officer from GTRE. This is because the supporting systems are quite nascent in India, he explains.

However, we have reached a stage where we can say that India has produced an indigenously built light combat aircraft, he adds proudly. His statements remind me that aeronautics is not just a job, it’s a commitment driven only by one’s passion.

The author is grateful to HAL museum for their support. Special thanks to Vijay Thiruvady for sharing his knowledge of the city’s aviation history and B K Garudachar, retired senior scientist, GTRE, for his inputs on aviation technology.

Cycle to the blue mountains

The Tour of Nilgiris, starting this Thursday, started out as a fun trip. It now aims to spread the message of adopting cycling as a sustainable and socially responsible means of transport.

Auto rickshaws are a key option for private transport in Bangalore. * There are more than 1 lakh registered autos in the city. * Number of Auto rickshaw’s = 100,000 * Min turnover per auto/per

CAF flashback: What saved your neighbourhood from becoming a messy, commercial hub

As the Citizen’s Action Forum turns 10. we look back at their decade of activism that has changed Bengaluru in so many ways. In the first of the series, the tale of the PIL against BDA’s Master Plan 2015, which saw the curb on commercial activities on roads less than 40 feet wide.