Between 9th and 11th February 2009, the Karnataka High Court dismissed 11 cases against land acquisition, filed by individuals regarding their residential and commercial properties, on Chinmaya Mission Hospital (CMH) Road. The court’s position was the acquisition were made for “public position” and hence cannot be challenged. This means that some of the tenant traders on CMH Road, who were part of the CMH Road Traders Association and had filed a PIL challenging the validity of the project, have also been asked to surrender their tenancy claims. The traders have time until 31st March this year to vacate their premises. 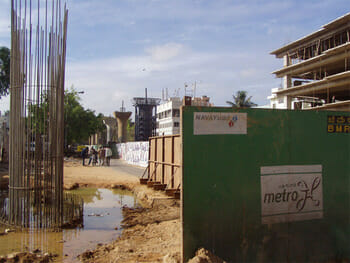 B L Y Chavan, Chief Public Relations Officer at the Bangalore Metro Rail Corporation Limited (BMRCL), claims that this is the first time in the country where tenants affected by an infrastructure project are being offered compensation packages. However, the tenants are not satisfied with the compensation amount, which was decided on the basis of the annual Value Added Tax and Sales Tax that they pay to the government. The tenants’ original demand was that they be allocated shops inside the CHM Road railway station. Chavan says that no such promises were made to the traders in the first place. In any case, as per the station design plans, there is no space for shops.

Until September 2008 BMRCL had been embroiled in long-standing disputes against the acquisition of individual properties in different parts of the city. However, the court has been quick in dismissing land acquisition cases this time around, in a span of just three days. The current judgments have been issued by Justice K L Manjunath.

Around this time last year, Justice Manjunath had also dismissed the CMH Road traders’ petition requesting a change in the alignment of the Metro from CMH Road to Old Madras Road. The judge had questioned the locus standi of the traders, arguing that since most of the traders were tenants and not property owners, they had no legal standing to petition for a change in the Metro alignment. Following this, the traders filed a PIL in the Karnataka high court, stating that the metro rail project was not valid; on the grounds that it was being implemented under the Mysore Tramways Act whereas in reality, the Metro is a train and not a tram. The PIL is being pursued, says Imtiyaz Ahmed, President of the CMH Road Shops and Establishments Association. He adds that the bench now consists of two judges – Gopalgowda and Manjunath.

The work on the Byappanahalli – MG Road corridor has speeded up. This is because the Byappanahalli station will be used as space for parking the trains. Work has also commenced on West of Chord Road and around Rajajinagar area, states Chavan. He points out that the work is proceeding as per schedule and that the litigations on CMH Road have not delayed the works on the road.

Meanwhile, the Hyderabad Metro Rail Project (HMRP), which has yet to take off, is already in troubled waters. This is because the group implementing the project – Maytas, has now been asked to prove their financial capability by 18th March. Maytas is owned by Satyam Computers which is itself on rocky terrain owing to fudged accounts and finances.

Dr Ramachandraiah Chigurupati, professor at the Centre for Social and Economic Studies (CESS), says Maytas does not have the financial resources to execute the Metro rail project. He is also a member of the Citizens for a Better Public Transport in Hyderabad, a coalition of individuals and civil society organisations who have been campaigning against HMRP.

Protests against HMRP stemmed from suspicions about whether Maytas had been favoured as a bidder even before the final tender was over. This allegation was also raised by E Sreedharan, Managing Director of the Delhi Metro Rail Corporation and chief consultant to HMRP. Other grounds for protests against HMRP include ‘large-scale demolition of buildings, including of the State archives and defacement of the historic heritage precincts’, lack of information sharing with the public about the project such as Detailed Project Reports (DPRs), high levels of noise likely to be caused by the running of the trains, and poor environment assessment of the project.

Some of the issues raised about the Hyderabad Metro also plague the Bangalore Metro Rail Project – DPRs and alignment studies have not been shared with the public and the way environmental clearance was given by the Ministry of Environment and Forests (MoEF). MoEF cleared the Metro rail project on the grounds that that the trains do not cause air pollution. However, no inquiry was made at that time into the noise pollution that would be caused by the running of the trains as well as the air pollution caused in the process of the construction.

Will heritage structures be affected with the Metro construction? Chavan states that the Metro will run underground in crowded areas such as Chickpet, KR Market and Majestic. This is because the surface space is too narrow for construction. The structures likely to be impacted are Tipu’s Palace and the fort. “But this impact will be in terms of the noise and the running of the trains underground. We have taken precaution to lay the lines some distance away from these structures. We have also conducted studies to understand the impact of the construction work and will take measures accordingly,” he said.

Will the current downturn affect the Metro project?

So, will the current economic slowdown affect the Bangalore project? Chavan suggests that this is not likely, though the state government has committed only Rs. 600 crores for the project in this year’s budget. He was in fact optimistic, stating that the low prices of cement and steel in the current scenario will lower the costs of construction and ultimately benefit the project.

Metro also expects a small amount of additional revenue. Chavan said about five per cent of the revenues for the Metro will come from advertising and another five per cent from property development. Asked whether cafes, eateries and shops will be constructed inside the stations, Chavan emphatically says, “We are not here to do property development. Our task is to facilitate the flow of the crowd in the station, not to add to the crowds. We will have minimum conveniences inside the station premises such as an ATM facility, a small coffee vending machine, et cetra.”

What remains to be seen now, as Dr Ramachandraiah has also pointed out in the case of the Hyderabad, is whether the public will actually take to using the Metro. Citizen Matters requested BMRCL to share the Metro alignment study to understand how the route had been determined and was told that the route was decided on the basis of peak-hour-peak-density traffic.

And so, Namma Metro proceeds……

A little bit of ‘Khichdi’ amidst Rajinikanth’s ‘Endhiran’

This week science fiction comes alive with Rajinikanth-starrer ‘Endhiran’. Also on offer for the first time, television serial ‘Khichdi’ on the big screen.

The ups and downs of Outer Ring Road: A view through the years

ORR, built to ease traffic congestion in Bengaluru, is ironically responsible for creating the biggest traffic jams in the city.