The garbage truck that visits the 5 blocks of JP Nagar’s Brigade Millennium community every morning usually leaves overflowing, and often with things that could be reused or recycled. Mayflower Block, 15 floors high, with about 220 families is a major contributor to this.

Some of us were already aware of ITC’s (paperboards) efforts at garbage segregation in Yelahanka, where their team goes door-to-door regularly to buy recyclable/reusable garbage. Taking a cue from that, and with the end objective of reducing the quantity of garbage that travels several kilometers to the landfill, the ‘Blue Drum Campaign’ was launched by the Mayflower Residents’ Association in November 2008.

Since the building is fitted with a garbage chute, residents are used to the convenience of just throwing everything unwanted down the chute. Today, the chute is to be used only for wet waste – kitchen waste and toilet waste. Every floor has been provided with a Blue Recycle Drum placed next to the garbage chute for dry waste – paper, board, plastic, glass, metal, e-waste.

To make this campaign fun for the residents, before the launch, one afternoon was spent doing ‘Drum Art’ – decorating the blue drums to make them look nice and attractive. Drum Art involved both children and adults. Then, residents and their house maids were educated house-to-house on garbage segregation – what garbage segregation is, how source-segregation of their garbage at home helps, how to do it.

To educate residents, we went door to door. A single briefing for everyone didn’t look possible. First we got a volunteer from each floor who was trained – and who in turn went door to door. We gave every house a segregation guidelines flier to put on their fridge. Maids were not always at home when we visited. We used another method to train them. We have a lady security guard at the guard house where the maids sign in every day. We got her to explain to the maids as and when they came to work.

Instructions on how to dispose of the waste were graphically displayed at strategic points – what goes into the chute and what into the blue drum. The house-keeping staff, who are responsible for carrying away the blue drum waste, were also trained on collection and sorting the stuff deposited in the blue drums. They are now provided with a nice trolley that makes transportation of the drum waste from the 15 floors to the basement storage room very convenient.

The total initial investment was about Rs.11,000 – on the blue drums, trolley and instruction signs.

Children were involved in the overall campaign too, along with the rest of the household.

Why garbage segregation? – There are many, many, benefits

To help improve health and hygiene and reducing global warming 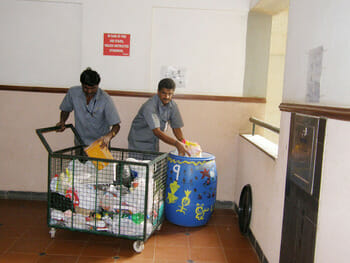 Four months into the campaign, the blue drums on each floor are often full at the end of the day. Those who follow the segregation at home realise that the actual kitchen waste is so little that they need to empty the kitchen dust-bin only once in 2-3 days. I am told that many households are keeping separate waste bins, with the children leading the way.

However, we still face the challenge of eliminating reusable/recyclable waste from the garbage truck by constant reinforcement and guidance.

At present, the blue drum waste is sold to recyclers and the money generated is used for the benefit of the house-keeping staff. Of course, if there is anything in the blue drum that is of use to anyone, they are free to have it. E-waste is disposed of in the office e-waste bin of one of our residents.

Garbage disposal is a serious problem in Bengaluru. Ours is but a small step in trying to alleviate this problem. We hope that in the near future, we are able to take steps towards converting our wet waste to manure. ⊕

A moth, not a hummingbird

If you happen to see Hummingbird Hawk Moth this winter, be assured that you have a lot of good luck on your plate!

BBMP commissioner defends the decision, says only 20 crores were released. BBMP is yet to pay 3000 crore pending bills.