On 8th March, the Fearless Karnataka group, in collaboration with the Blank Noise Project, responded to the attacks on women in Bengaluru between 6th and 28th February. They marked Women’s Day by conducting street plays and opinion polls, conversed with men and women on the streets, and distributed posters at Rest House Road, Vasanthnagar, CMH Road, Ulsoor and Cunningham Road. These were the very localities where attacks on the women were reported. The group wanted to spread awareness about the violence, and more importantly, to sensitise bystanders to respond proactively to such situations. 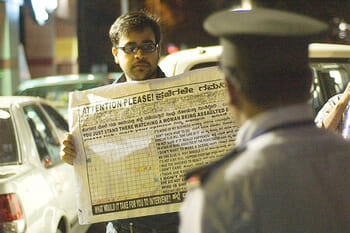 Pranesh Prakash, a volunteer for the activities on Rest House Road/Church Street, inviting the security guard at Amoeba Restaurant on Church Street to cast his opinion on what he would do if he saw a woman being attacked. (Pic: Kiran Jonnalagadda)

Nirbhaya Karnataka (Fearless Karnataka (FK)) is a collective formed by citizens to reclaim public spaces and promote safety for all, in the light of the recent attacks on individuals across Karnataka, and Bangalore in particular. Blank Noise is a project that aims to counter harassment in public space, commonly termed ‘eve teasing’.

B-Aware is an online resource created to provide information for victims, prompted by recent unprovoked attacks on women across the city. The site creators say they want to create awareness during times of distress (situations such as attacks on women, cultural harassment and more).

“It was a very powerful experience for me to stand on the road and make eye contact with perfect strangers, inviting them to come and find out what was going on,” said Lalitha Kamath, one of the volunteers who assisted with the activities on CMH Road. “People were definitely interested to find out what was going on and many women came forward saying that they would respond if they saw another woman being beaten for unnecessary reasons,” she added.

On CMH Road and Ulsoor, Maraa, a media collective, put up an interactive performance to provoke passers-by to take notice of the volunteers and engage with them. “I was enthused by the fact that so many people showed such agency. They went to nearby stores, purchased cellophane tape on their own expense, and took posters from us to put up in their neighbourhoods,” said Hemangini Gupta who coordinated the final event at Banappa Park on KG Road, on 8th March and was also present on CMH Road.

On Cunningham Road, volunteers held discussions with young girls on issues of sexual harassment and asked if the girls had witnessed any such incidents before. “It was interesting to note that quite a few people are still unaware of the attacks in Bangalore,” said Aarathi Ajit who was coordinating the activities on Cunningham Road. “We were able to talk to families who were visiting Sigma Mall and make them aware of what was going on.”

FK volunteers also conducted opinion polls. People were also asked to choose from multiple answers what they would do if they saw some men beating a woman on the street. The polls were prepared by the Blank Noise Project and largely contained negative responses such as ‘I don’t have time’, ‘In retrospect, I would have liked to help’, et cetra. “The opinion polls help to initiate discussions with the public,” said Jasmeen Patheja of the Blank Noise Project.

Opinions from passers-by on Rest House Road, Cunningham Road and Vasanthnagar were sought. In addition to casting their poll, people would talk to the volunteers. “Violence against women was always taking place in Bangalore. It is only now that such events are being reported and hence are being taken notice of,” said one of the persons while casting his poll on Rest House Road. Yet some other people spoke about the influx of migrants from other parts of the country into Bangalore and these ‘outsiders’ were more vulnerable to physical violence. Some of the bystanders on Brigade Road agreed that the lack of sufficient street lighting in the city gave women an unsafe feeling, especially when they walk alone at night.

Malavika Adnur, one of the volunteers, stands outside Blossoms Bookstore with the opinion poll (Pic: Kiran Jonnalagadda)

“But the girls dress provocatively!”

This response was received from a cross section of people including policemen on Rest House Road and Cunningham Road, auto drivers at Vasanthnagar, and people on Brigade Road. Male volunteers on Rest House Road and Cunningham Road had to explain to the policemen why they were there and what they were doing. “The policemen read the testimonials which the girls who were attacked had written. They handed it back to me and said, ‘but in Mangalore, the girls were dressed provocatively. Hence, the men were tempted,’” reported Kunal Ashok, one of the Blank Noise Project volunteers who pacified the cops on Church street.

Rakshith M, another volunteer, received a similar response from the cops and citizens on Cunningham Road. He counters: “When Priyanka Chopra and Aishwarya Rai wear revealing clothes on the screen, no one throws a stone at them. Then why are the girls who are wearing simple clothes in this city being attacked?”

“In the bystander polls at Vasanthnagar, some passers-by including autorickshaw drivers said that they wouldn’t help a woman in need because they would feel scared for themselves,” reported Ratna Appender who was co-coordinating the activities at Vasanthnagar. She added: “These people also said that women ask for it because they dress provocatively and move around at night.”

“Shopkeepers in Ulsoor area were very helpful in warding off the police who felt that we were blocking the road. On CMH Road, people even told us where we could put up the posters so that these could be visible. And there were also a section of people, including young boys, who were not interested and were taking our activities lightly. Women who were standing around watched such responses from the boys and disciplined them,” said Lalitha.

In all the localities, volunteers and coordinators reported that people were keen to get involved and help in spreading awareness. Overall, it was felt that the interventions had helped to begin the process of dialogue with everyone, including persons who held deep rooted prejudices and stereotypes. “This has been a very good beginning. From here we can address larger issues such as communal violence and attacks on minority communities in Karnataka,” articulated Ratna.

Take Back the Night, event at Banappa Park

Clothes which women had worn when they were sexually harassed were displayed at the event at Banappa Park by the Blank Noise project(Pic: Kiran Jonnalagadda)

People gathered in large numbers at Banappa Park to lodge their protest against the attacks, albeit in creative ways. Performances by Kirtana Kumar, Maraa, Mallige and other groups highlighted how women from across the board face issues of harassment. The night ended with an opera performance directed by Kirtana Kumar. Women dressed in white read out the composition which featured the names of all the girls who were attacked, indicating how each of these girls and the incidents that happened with them, represent the repeated violence carried out on women’s bodies.

The Blank Noise Project had requested women to donate clothes which they were wearing when they had been harassed and or abused. The opera performance with the clothes in the backdrop added greater seriousness to the atmosphere. People broke out into a dance thereafter and the event was wrapped up at 10:30 PM. ⊕

Bengaluru the new name fo Bangalore City is yet to be confirmed by the central government. Here’s the story on how Bangalore got its name and its evolution to Bengaluru.

Had a hectic week at office? Indulge yourself at Bangalore’s spas and resorts. 1. Angsana Spa & Resort Details A perfect way to unwind and relax over the weekend after a hectic week. Angsana Spa