“Being a woman is a terribly difficult task, since it consists, principally, in dealing with men”, said novelist Joseph Conrad, and for one who has been working for the welfare of women for the past 30 years, this is a reality. In a male-dominated society, Geeta Rao has been relentlessly working towards women empowerment, stalking the corridors of power, seeking justice, roaring like a lioness, and making a difference. “I have always been aggressive”, says this compact bundle of energy, “nobody can take me for granted!” 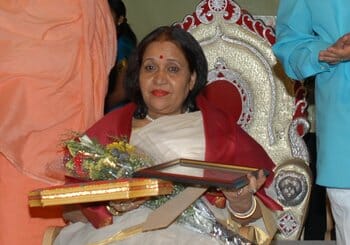 Forty-nine year old Geeta Rao was one of the recipients of the award instituted by the Indian Women Enterprise Institute on 8th March, the International Day of Women, in a ceremony held at Bharatiya Vidya Bhavan. This is the tenth award she has received in recognition of her contribution to women welfare, including the Karnataka Ratna in 2002, Indira Priyadarshini Award and the Mother Theresa Excellence Award earlier.

For Geeta, this comes naturally as being both bold and compassionate at the same time runs in her blood. Her grandparents, she says, were in the army; her father, a police officer and mother, a social worker. With her husband, a defense officer, it was inevitable that Geeta found herself at the welfare centers of wherever they were stationed, all over the country, especially at far east, far west, central and south India, where she took up the cause of women, jawans and civilians. Even as a college student, Geeta travelled to rural areas for social service, as part of her Rotaract, NCC and NSS activities.

A Maharashtrian married to a Kannadiga, Geeta has made Bangalore her home. She has been involved in the Women’s Commission in different capacities, once as Publicity In-charge and during Pramila Nesargi’s tenure, as Press Secretary. It was during this time that Geeta, along with Pramila Nesargi, counseled innumerable women at their office in Cauvery Bhavan and helped them get justice. “Women are women, whether they are from the upper class or lower class”, she says, “all have problems arising from insecurity and male domination. They are a confused lot”. Geeta has come across even financially secure women from glamorous professions like models and air hostesses who needed counseling.

Geeta has also worked with the People’s Movement for Human Rights, the Karnataka Environment Research Foundation and the YWCA (Young Women’s Christian Association) among others. She founded the Adarsha Mahila Foundation five years ago to continue her mission of women empowerment- this time rural women. This Foundation operates out of her home-office in Bannerghatta near the National Park. Volunteers of the Foundation approach illiterate and underprivileged women from the surrounding areas including Anekal and North Karnataka, and offer them training in simple jobs like stitching, papad making and pickle making. Run solely by volunteers and no outside funding, the Foundation has so far helped around 1000 rural women earn a living. Geeta has to seek the women herself, convince their families and then recruit them for training. “It requires enormous patience to run this enterprise, with no official power and funds”, says Geeta. “It’s only my volunteers and the goodwill that is helping me”. Geeta often finds herself attending calls even in the middle of the night. “I simply cannot ignore a call for help”, she says.

Geeta rues the fact that at present the Women’s Commission is headed by men- the minister in charge of Women and Child Development is P.M. Narendra Swamy and the Chairman is Dr B S Ashwath. “Why, are there no competent women to head the Commission?” she demands, “How can a woman approach a man for counseling and justice? Earlier the Commission was open every day of the week, now the Chairman’s secretary (who is fortunately, a woman), is in the office only twice a week”. The Women’s Commission was instituted by the Governor by an Act in 1995, and it requires five members to be appointed. But at present it has none. “When I was officiating, I used to pick up the phone and call the concerned bureaucrat or police officer there and then and seek justice. Now, who is doing it?” she asks. “If you cannot help people with your position and power, you have no business to be there”, she declares. Geeta adds that she would gladly take up the task if offered to her and not even take a salary for it- she would rather give it all to the deprived and destitute women.

Regarding the recent questions raised on women’s safety in the city, Geeta feels definitely the fear factor has gone up. Women’s rights are sacrosanct and nobody can dictate what culture she should follow. It is an individual prerogative. As for young girls, Geeta appeals to them to keep their mothers informed of their activities. “Every mother has only one worry- is my daughter safe?” says Geeta. Why not fathers, because “mother is a fact, father a myth!” Geeta guffaws heartily.

Getting serious, Geeta says that as a society we need to inculcate in girls and boys respect for mother, father and teacher (Mautru devo bhava, Pitru devo bhava, Acharya devo bhava). “If this sentiment is deeply rooted in them, our children will never do anything to hurt their elders, and will always be within limits”, she says confidently. She has a message for women on Women’s Day (even though all 365 days are a woman’s day, she says): “If we want to fight for our rights, we must first know our rights. When we do the right work, we will get the right due. Then men will also respect and understand us, and appreciate our virtues. Then we can truly call ourselves Mother India”.

What next for this dynamic woman? “Well, karmanyevadhikaraste… I will just keep on doing my work without expecting anything in return”, says Geeta, “that is my life’s calling”.

Tathastu (so be it)!

Keeping the city clean when it has a dustbin free policy is pretty hard. The Ecofreaks along with some volunteers try to do just this. This time it was Ejipura.

Why I am going to protest against the Elevated Corridor, and what the govt should be doing first

The government can take some quick impact decisions to fix the road congestion issue – including improving signal timings and rationalising bus routes.

Going to a play at Chowdiah