Sadrushya – the exhibition at Chitrakala Parishat, held from 28th February to 5th March, was an unusual one. It was a collection of paintings by Ashok V Bhandare, Ramesh Babu, Ramaiah, Raju D P and Venugopala A, all of whom once worked as artists for film banners. With the advent of digital printing and computer aided advertising having effectively wiped out the art of manual painting, these talented artists had to move onto other platforms to keep their art alive.

Bhandare, who studied in Ken School of Arts in Bangalore and was a banner painter from 1972 to 1995, is now a freelancer who has held exhibitions at the Mysore Dassera celebrations and at Shristi Art Gallery, among other places. He is an expert at interpretations of Ganesha and in still life. But his most captivating work so far is Basavanna, which he created from a photograph and looks exactly like one.

Babu is an electrical engineer who now works with BSNL. He is practiced in the Tanjore and Mysore styles, with solo shows in Bangalore, Hyderabad and New Delhi to his credit. Babu exhibited his mural collection wherein he uses terracotta, clay and carved wood that is pasted on canvas, imparting a unique three dimensional effect. Among his works, Door – which shows an old locked door, is astonishing in its realism.

Ramaiah, who has trained under the famous water colour expert M T V Acharya and studied at Ken School of Arts, has contributed to the Mysore Dassera festival and Uppara Sangha. He continues to work as a banner artist, a field he ventured into in 1969.Ramaiah’s expertise lies in abstract and still life painting. The bright colours and contrasts in his works are highly interesting, especially a series titled Shapes. But it is an untitled work depicting a flower that really caught my attention. 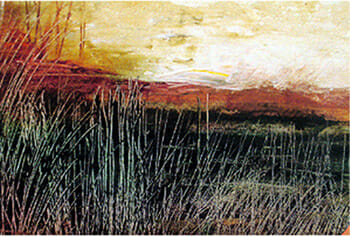 Raju, who also studied at Ken School of Arts, has 25 years of experience as a banner artist. His collections are at the SBI Museum at Kolkata and Department of Coal India in Ranchi. Now a freelance artist, Raju’s still life paintings are stunningly real. Using mostly mixed media and oil on canvas, he also has a series of abstract works in his collection.

Venugopala – the youngest among the five, is a member of a group called ‘Studio 28′. Though he works with various materials, his forte lies in murals, oil painting and water colours. Venugopala’s distinctive style of painting is clearly noticeable through the entire collection, such as the series of colourful paintings titled Gaalipata, which means ‘kite’ in Kannada.

This was a diverse collection, with each artist showing great expertise in his area of work. If these paintings had signatures of renowned artists, there would have been a huge crowd assembled to see the collection and much bidding to own the works.

Kabir Festival, held in the city, at Sophia High School on Palace Road, from 23rd February to 1st March, had a series of film screenings, talks and musical concerts about the 15th century mystic weaver-poet Kabir Das.

The festival screened four documentary films – a series of experiences of Shabnam Virmani during her quest for Kabir in our contemporary lives. One of the films Kabira Khada Bazaar Mein showed the beliefs of the ‘Kabir Panthis‘, people who worship Kabir and follow the Kabir way of living, which includes accepting all people as equals. The film goes on to show how the mahanth (awakened individuals among the Kabir Panthis) who is worshipped and who should be leading devotees through the righteous path, brings in blind beliefs and swindles the poor. The film also shows an NGO organisation ‘Ekalavya‘ and its work in making the Kabir way of life a reality.

The work and effort behind these films can be found at http://www.kabirproject.org/

Plumbers in demand, Bangalore struggling to get RWH right

Citizens and vendors alike are going through expected teething troubles to meet the mandatory deadline. Some Bangaloreans are simply handing over their gate keys to plumbers without knowing what is going to be done!

Age no bar for Jayanagar resident

Local news roundup from South Bangalore this week: meet this East End resident who is enthusiastic about craftwork; Shoe thieves are active, while police And there are plans to make Jayanagar a no-plastic zone.

Rockstar: Some music, much noise

Gloom, turmoil and good intentions alone don’t make a great film. The only saving grace is Ranbir Kapoor. What’s all the fuss about?