City planning authorities who often come under fire for their decisions, are facing yet another accusation this time, for sanctioning a mega development project in an ecologically sensitive area. BDA has approved a private residential project in an area comprising valley and buffer zones in Varthur Hobli, while State Environment Impact Assessment Authority (SEIAA) and Karnataka State Pollution Control Board (KSPCB) have issued the environmental clearances.

The residential project – Shriram Chirping Woods by Shrivision Homes Pvt Ltd – is under construction in an ecologically sensitive area between Kasavanahalli (Harlur) and Kaikondarahalli lakes in Varthur hobli. The area is a wetland located in the downstream of Kasavanahalli lake and upstream of Kaikondrahalli lake. 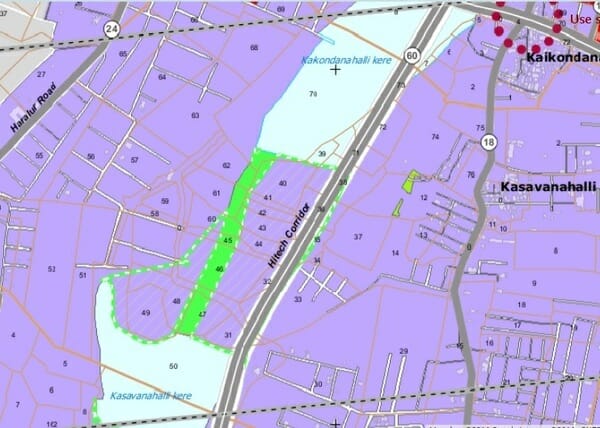 Valley zone as per BDA’s Revised Master Plan, clearly demarcating the valley zone and the nala.

According to Revised Master Plan 2015, a secondary drain (Nala buffer) runs through the project property flowing from Kasavanahalli lake to Kaikondarahalli lake. While the area with nala is in valley zone, the surrounding area had been classified as ‘Industrial Hi-tech zone’ with purple colour.

The BDA, in a letter dated January 9, 2013 mentions that in the total project property, 7 acre 6.48 gunta falls within the sensitive zone, 1 acre 38 gunta falls within the buffer zone and 1 acre 1.25 guntas is the estimated land required for the road construction. As 7 acre of the project area falls under sensitive valley zone, BDA did not directly grant the permission, but referred the application to its Sensitive Zone Sub-Committee.

The Sub-Committee which inspected the project property, granted permission for change of land use based on some terms and conditions. The Committee recommended that a buffer zone of 25 metres should be earmarked on both sides of secondary nala buffer connecting Kasavanahalli and Kaikondarahalli lakes. Further, it imposed another condition that, all other Rajakaluves existing in the project property should be demarcated and no construction should be allowed there and no untreated water should be flown out.

It also recommended a study of the water table, before constructing basements. Proper arrangements for water to flow into valley region, planting of trees in the buffer zone of the valley, were the other conditions. With these, the committee removed the “sensitive” clause from the land use of the valley.

Alongwith this, a BDA document shows that the position of the nala was changed in the survey map.

RMP 2015, says that any valley for which permission has been accorded either by the authority or government, then such permission will be valid irrespective of the land use classification in the RMP 2015. Fresh permissions shall not be accorded in valley zone. However, the permission for this project was given in 2013.

Difference between the topography of the land between Kasavanahalli and Kaikondrahalli lakes, in 2002 and 2016, as seen on Google Earth.

\Some of the conditions were:

Original plan and the modified plan

The Environment Clearance from SEIAA states that the project plot area is 64,039.81 sq metres and it will have 21 towers, up to 16 floors each, totalling 870 units. The EC clearly mentions that the permitted height is 44.93 meters, and in case of any change in the scope of the project, the project would require a fresh appraisal by the Authority.

However, the developer modified the project plan and an application was submitted to BDA in December 2013. According to the modified plan sanction issued in June 2014, the project comprises of 3 blocks with 870 residential units. Block 1 will have a residential building of 2 BF+G+19 floors and Basement+G+1 multi-purpose hall. In Block 2 – Tower 1 = Basement+G+19, Tower 2, 3 and 4 = 2 Basement+G+24 and 2 Basement+G+1 Club house. Block 3 will have G+6 and 1 floor club house.

The height of the apartment is now 76 metres and the project area is spread over 61,612 sq metres. In addition, the developer also proposed to utilise rajakaluve buffer zone as park and open space.

Though the developer applied for fresh EC and Consent for Establishment in November 2014, they did not get the EC till recently. KSPCB issued Consent of Establishment in February 2015, whereas SEIAA granted Environment Clearance to the project (modified plan) only in December 2015. While issuing the Environmental Clearance, the SEIAA has put some specific conditions on the developer to be followed during construction phase.

Surprisingly, SEIAA website continues to show the status of the EC application for Shrivision Homes Pvt Ltd as “being considered by SEAC.” 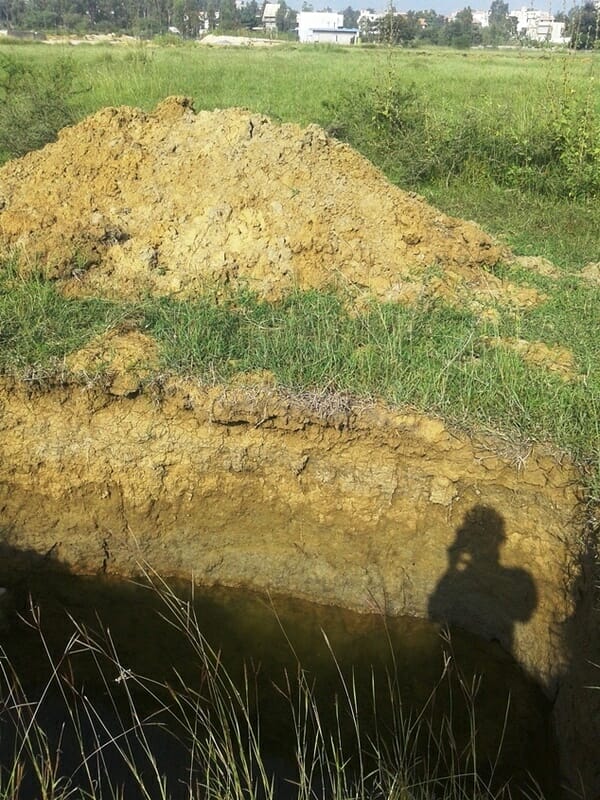 A photo taken in January 2014, showing how water seeped out from the ground when the wetland was being dug for forming the foundation.

‘Wetland crucial for the survival of Kaikondrahalli lake’

There are certain reasons behind why the project has caused worry in a growing city like Bengaluru where development is taking place at the cost of environment. Study reports by professors at the Indian Institute of Science and Azim Premji University have cautioned against how construction at wetlands would harm the ecology.

A report on “Ecological and environmental importance of the wetland upstream of Kaikondarahalli lake, the site of proposed Shriram Chirping Woods Project,” was prepared by Prof Harini Nagendra, from School of Development at Azim Premji University, in November 2014. 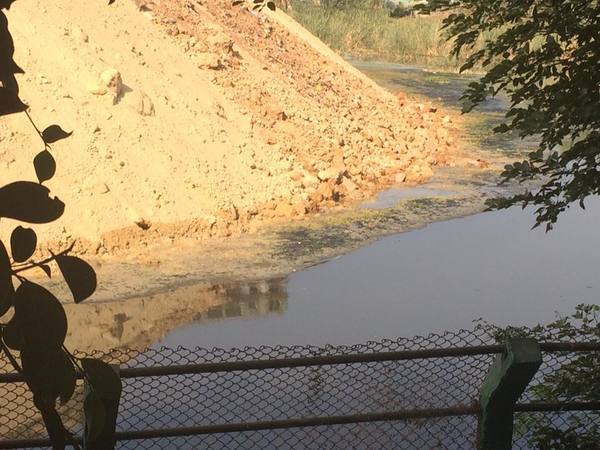 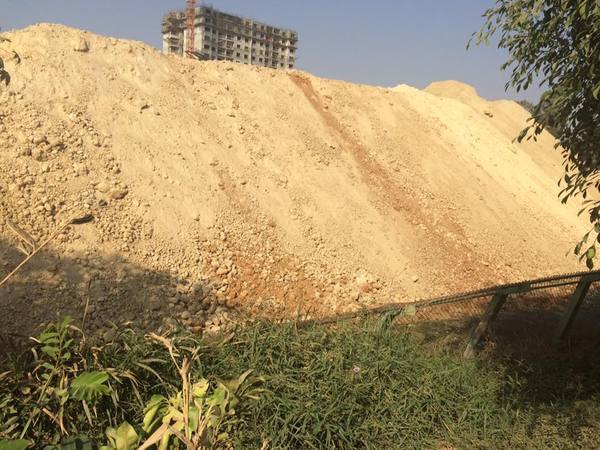 It highlights how the entire wetland between Kasavanahalli and Kaikondarahalli lakes, which is a low lying area, is flooded with water appearing like a large shallow lake during monsoon. “The village map of Kasavanahalli indicates the presence of two kaluves in this wetland, which channel water into Kaikondrahalli lake. It is critical to survey, demarcate and protect these kaluves from being built over. The wetland area is also vital for replenishing the lakes downstream of Kasavanahalli, i.e. Kaikondrahalli, and Sowlkere. Disruptions of flow in an upstream lake lead to disastrous consequences on downstream lakes, as Bengaluru has witnessed over the past several years,” the report says.

Facts about the project in a nutshell:

The report highlights the sad state of affairs of Kaikondarahalli and Kasavanahalli lakes. The reports says, “the fresh sewage entering in south side of Kasavanahalli lake and a drainage channel is being destroyed due to construction activities that are taking place on the lake bed.”

The report states that construction activities in valley zone are contrary to sustainable development as the natural resources get affected. Eventually this kills the lake. Valley zones are no development zones as per CDP 2005 and 2015.

In case of highrise buildings in flood prone zone of the lake, a 30-metre buffer of “no development zone” is to be maintained. Removal of Rajakaluve or lake connectivity enhances episodes of flooding and associated disasters and affects ground water in the region.

On land use changes, the report says the conversion of green over/vegetation in the watershed especially in the valley zone regions of the lake to paved surfaces would alter the hydrological regime leading to flash floods, lowered groundwater table, less water in the lake during lean seasons.

Battle on in the Green court

In an attempt to save the lake, citizens of Bengaluru have approached the Southern Bench of National Green Tribunal questioning the construction activities at valley zone between Kaikondarahalli and Kasavanahalli lakes. Namma Bengaluru Foundation (NBF) and Mahadevapura Parisara Samrakshane Mathu Abhivruddhi Samiti (MAPSAS) filed a litigation in NGT in October 2015, questioning the project. The applicants in their original application had contended that the project is developed in an ecologically sensitive area, hence would harm the environment.

They also held that the authorities had given permission to the project without application of mind and without assessing the environmental damage that the project would cause.

The NGT, in its interim order on October 26th, 2015, granted a stay restraining Shrivision Homes Pvt Ltd from carrying on construction work in the project area until further orders.

Later the developers filed their reply to the order and requested the court to vacate the stay. The Tribunal in its order dated February 8th, 2016 vacated the stay and allowed the construction of six other floors in the first tower where 10 floors are already constructed, till the next orders.

The NGT bench in its order observed that the applicants have not chosen to challenge either the permission granted by BDA or the clearances issued by SEIAA and KSPCB, but only sought to restrain the construction activities.

Based on the NGT observations, one of the petitioners submitted an appeal last month. Here, the applicant has accused the developer of starting the construction work prior to obtaining environmental clearance from SEIAA for the revised project plan. SEIAA granted EC to the developer for the revised project only in December 2015, when the case was before the NGT. The appellant has pointed that the SEIAA issued certificate when the case was in the court and did not taken any action against the developer.

The appellant pointed to the discrepancy in the certificates issued by SEIAA and KSPCB with a clear difference in built-up area and has accused the developer of suppressing facts before the authorities. The Namma Bengaluru Foundation (NBF) has also expressed its concern over how shifting of rajakaluve running through the property would affect the water flow.

The matter is pending before the NGT. Citizen Matters wrote to the project proponents asking for a clarification on the steps taken to have the nala intact and/or mitigate the flooding. We are yet to receive a reply. The article will be updated if and when we receive a reply.

Ananth Kumar: A lookback on promises and achievements

Bangalore South MP, though is very vocal in Parliament, seems to be unable to connect with his electorate back home effectively. Read more!

The long-overdue uptick for RWH is finally here. Around 10,000 buildings in the city may be catching rainwater, by one informal estimate, and the numbers are steadily rising.