Ulsoor, Indiranagar, Vasanthnagar and Rest House Road! Six incidents of attacks on women in Bengaluru reported in the media in the last 20 days. The attackers in all the cases were either a pair of men on bikes or in groups of four in cars. In most cases, the women were in jeans or western clothing but in one of the cases, a woman attired in Salwar Kameez was also subject to attack. In the cases where the women retaliated by slapping the attackers, the latter became further infuriated and became more violent. In fact, in the incident at Indiranagar, the attacker noted the woman’s license plate number and threatened to come back and harm/kill her. The women attacked in Ulsoor, Indiranagar and Vasanthnagar were between the ages of 25 and 30.

The most recent attack took place on 28th February around 10:30 PM, where Sanjana, a journalist with Tehelka, was attacked in Vasanthnagar. Sanjana was hailing an auto after her two-wheeler’s tyre got punctured as she was returning from a function. Two men on a motorbike tried to assault her by punching her. She used her presence of mind and managed to throw the bikers off balance. She has filed a NCR (non-cognizable offence report) with the High Grounds police station. 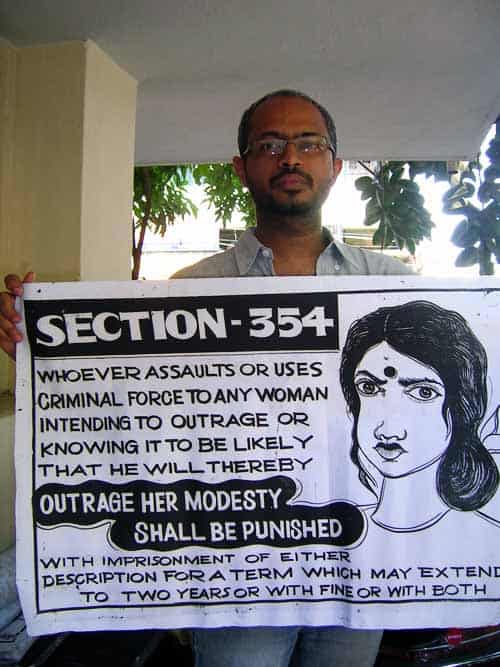 Benson Issac, a member of Nirbhaya Karnataka, holding a poster prepared by the group to condemn assaults against women (pic: Zainab Bawa)

On 26th February, about 40-50 citizens, including Sanjana and some other women who had been attacked recently, came together and formed a collective called “Nirbhaya Karnataka” (Fearless Karnataka). Nirbhaya Karnataka is a group of concerned citizens that have come together to reclaim public spaces and promote safety for all.

In a press release, the group asserts that the attacks on women in Bangalore are not isolated events. “Neither can they be dismissed as trivial incidents of eve-easing,” emphasize the members. Earlier, on 27th February, the police commissioner of Bangalore had said to the media that the attacks against the women were acts of eve-teasing.

Nirbhaya Karnataka organized an informal discussion on 28th February, inviting the press, to discuss the situation and to elicit participation from the press to deal with the situation. They explained that the attacks were carried out on the pretext that the women were wearing western clothes.

The women who were attacked, as well as other members of Nirbhaya Karnataka said that there seems to be a pattern in the attacks. Said Lata (name changed on request), one of the women who was attacked, “Violence against women in Bangalore and Karnataka has been taking place for a while. The current events are symptomatic of a larger problem.” Shakun Mohini of Vimochana concurred with Lata.

Shakun had been part of a fact finding mission to Mangalore after the pub attacks. Her team found that about 200 people had held the entire city on ransom. Reporting from her findings in Mangalore, she pointed out that students in Mangalore are too scared to even walk with others belonging to different communities. “Even the bus cleaners report to authorities when they see mixed groups socializing with each other in the buses. A fear of culture being spread across the state. Overtly, the debate seems to be on moral issues, but there are definitely more deep-seated issues such as communalism from which the present incidents and discourses are stemming.” She said they do not want the same to happen in Bangalore and the rest of the state.

Nirbhaya Karnataka is not certain about which group is carrying out the attacks. They point out that there could be a connection between the attacks in Mangalore and Bangalore.

The bystanders’ apathy in the attacks that happened in daylight has been most shocking. "A woman was attacked at 1 PM in the afternoon, amidst other people on the road, and no one came to help her. This is a shame on society,” said Jagadeesha B. N., a lawyer at the Alternative Law Forum (ALF) and a member of Nirbhaya Karnataka. Even the police have not been helpful to the victims. In the case of the attack that occurred on Rest House Road, the police dismissed the incident as a ‘drunken brawl’ and were not cooperative in filing the FIR (First Information Report), according to a blog post on the matter.

It is important to note that the incidents of violence have not only taken place against women wearing western clothes, speaking English, and belonging to a particular section of the society. Rukmini M, a leader of a garment workers’ union in Bangalore, who was also present at the press conference, spoke about a case of a garment worker who was raped and subsequently became pregnant. She said that the police had refused to file a FIR and investigate in the case. Rukmini added that, given this situation, workers are wary of working overtime and returning home late.

To a question, if this was the time when the Goonda Act should be invoked, Clifton Rosario of ALF said, “The Goonda Act can be invoked against individuals. You will end up punishing 20-30 persons at the most. But can the Goonda Act change the patriarchal mindset of our society? Today, men walk on the streets knowing that they can attack a woman if they like and no one will question their actions. We need to change people’s mindsets.”

Nirbhaya Karnataka has planned a series of activities to put pressure on the authorities to bring the attackers to book and at the same time, sensitize the public to not be apathetic when such attacks take place. On 7th March, the group will meet the Director General of the Police, Ajai Kumar Singh and submit a memorandum for the police to take action against this problem. On 8th March, the group has planned the ‘Take Back the Night’ event to publicize the harassment against women across the city as well as build a sense of community at the neighbourhood level so that an attack on a woman is seen as an assault on the locality and the residents of the area come forward in support of the woman.

It is a massive 147-page complaint with an annexure running into 3,368 pages. T J Abraham’s case currently at the Lokayukta Court names the who’s who of Bangalore’s politicos.

Toasted as monument to Bengaluru having become part of a clutch of modern cities with swanky rapid transport, Namma Metro has sunk to a low. Will BMRCL act?

The petition by plastic industry was dismissed on technical grounds, and plastic manufacturers can question the ban in National Green Tribunal.