It was an uneventful lazy Sunday evening which took a turn for the better when I met up with Nischal Pai at a coffee shop in Indira Nagar. Nischal Pai is a Bangalore-based marathon runner who just completed the 42 km Bombay Marathon held on 20 Jan 08.

It was when Nischal was at Pune in 2000 pursuing her Masters degree that she started running. The motive: it was the most inexpensive way to lose weight! She was first introduced to the world of marathons by a colleague at work who told her about the Bangalore marathon way back in 2005. She started training to attempt the 21 km half marathon and to her surprise and elation not only completed the km run but ended up coming in 10th. 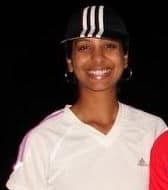 Her first hand experience with the Bangalore Marathon in 2005 strengthened her resolve to get herself in running shape to attempt more runs and longer distances. In her own words she was hooked by the feeling of freedom and the adrenaline rush associated with running which now transcended the prerequisite of basic fitness.

Having spent most of her life in Bangalore, Nischal is extremely attached to the place and people. She used to run around the Ulsoor Lake and at the Cubbon Park Trail. She is now a part of two running clubs here — the Runners for Life and the Bangalore Hash House Harriers and she proudly proclaims that Bangalore has one of the best running communities in India. RFL (Runners for Life) roughly has around 700 members and Bangalore Hash House Harriers has around 300 members shedding light on the fact that running is a popular sport amongst Bangaloreans.

These two running communities organise weekend runs in and around Bangalore keeping the spirit of the sport alive. In fact, RFL has a run and breakfast scheduled to take place at Eagleridge which is around 16 kms from Bangalore on 9 March and around 70 people are expected to show up. So if you have a passion for running and want to be part of a network of like minded individuals you can join any or both of the communities. The runs are organised on alternate weekends so that if you’re a member of both clubs you won’t be missing out on anything.

Working as a process trainer at TataSky by day, Nischal makes time for the rigorous training required for marathons by running early in the morning and on weekends. She also undergoes strength training at the Manipal Centre and has recently joined the Nisha Millet Swimming Camp. She is currently looking forward to the Tibetan Marathon which will be held in July and a 150 km run that she and a few others are planning for the near future. Nischal is ambitious and wants to push for more. ⊕

About Rochelle D'Silva 4 Articles
The author has not yet added any personal or biographical info to her or his author profile.
About News Desk 1161 Articles
The News Desk at Citizen Matters puts out Press Releases, notifications and curated information useful to the urban reader.
Website Facebook Instagram Twitter YouTube LinkedIn

‘A section of Cubbon park can be converted into sports park’

He started running because it was the most convenient and simply accessible way to work out. But today, Ashok Nath, 49, has been awarded the most inspiring runner of the year award.

His approach seems to make the very essence of one key aspect democracies worldwide — political parties – standup on its head. The founder of Nav Bharat says his organisation is going candidate-centric to make crooks lose elections.

BBMP polls that were expected to be held in the next couple of months, will likely get delayed again. Read more in our weekly news roundup.