Soul revival, that’s the feeling one was left with at the conclusion of the Biennial dance festival in Bangalore. The first festival in the city with contemporary dance as its theme, Biennial hopes to have two shows annually and justify its name! It was hosted by Attakalari, a trust formed in 1992 by artistes from different disciplines to have a platform for contemporary physical expressions in India. 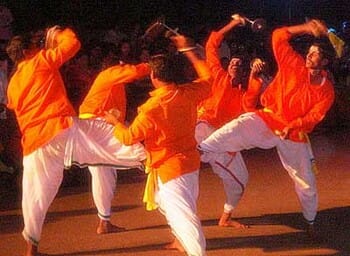 The ten day dance festival (6th February-15th February) hosted shows of dance troupes from India and abroad at multiple locations in Bangalore which included the Chowdiah Hall, JSS auditorium, Alliance Francaise, Ranga Shankara. All shows had entry tickets priced between Rs.100 and Rs.1000.The aim of the festival, said the organisers, was to encourage interaction and exchange of ideas between artists from different cultures and facilitate international co-productions and collaborative projects. I was a witness to its true sense of international affiliations- the collaborations have come in various forms including – technology for lights, multimedia, costumes, movement arts, music and the thought processes from a culturally and geographically diverse team.

The inaugural events had been planned on a grand scale. Unfortunately, the crowd was not in full strength to witness it all. It was a rare sight to see that a photo documentary, as a part of the festival, was projected on exterior walls of the Chowdiah. The walls played home to media artist Christian Ziegler’s Rickshaw Bangalore, a photo documentary by the artist. The German artist first came to Bangalore in 2002 and by his second visit in 2008, he was taken by a surprise with the pace of activity that had changed the city’s landscape and decided to make a photo documentary to capture it.

Another spectacle as a part of the event was the shadow dance which was again projected on the large exterior walls of the auditorium. There was the Dollu Kunnita performed by women followed by Kamsale Nritya from the Mysore district. Both the performances were quite breathtaking. It was fascinating to see women performing aerobics along with managing the Dollu, and the men timed their instruments (Kamsale) and also managed to make it action packed by twirling and twisting in the air.

The event was flagged off by the Chief Secretary of Karnataka, Sudhakar Rao. A glimpse of what would be in store for the rest of the days with a preview from all the artistes from Korea, Japan, Belgium, Switzerland, Canada, Netherlands and Portugal was showcased next.

I decided to watch two shows of the festival. The first was the one by the Nrityagram Dance Ensemble. I had seen the legendary group’s performance once before at the Vasantahabba, but this experience was special, with the portrayal of the Ardhanareeshwara stuti, a hymn transformed into a love song for Lord Shiva. The visualisation of each verse was executed perfectly. The piece ended with an Aarati, a salutation to the presiding deities of Odissi dance, Goddess Vimala and Lord Jagannath.

The meet the artist session was quite insightful. Surupa Sen, the choreographer and the lead of the team explained that to bring symmetry in the asymmetry of the art form one has to know one’s dancers. A male dance enthusiast among the audience wanted to know if men would be allowed as a part of the troop to which Surupa invited talented men to audition with them. The tone of the whole performance seemed classical; but as Surupa rightly remarked they were contemporary as they belonged to today, but their roots are ancient as the art form is traditional and classical.

Next, I chose to watch the world premiere of Attakkalari’s Chronotopia. What makes this repertory company’s every production special is the usage of technology to enhance the feel of the emotion and movements. The audience was left feeling haunted by their own memories of life. The piece is inspired by the Tamil epic Chilappathikaram. Jaychandran Palazhy explained that he chose it for various reasons; one, it was one of the few epics to have a female protagonist, and two, because he had the vocabulary to retain the abstractness in it.

The most striking feature of the art form was the lighting technology used. The stage was separated into two spaces using a screen which acted host to the light waves forming a reflection of the dancers moving around it, a hit with the audience. On conclusion of the performance, the meet the artist slot allowed us to know how it was made. A curious audience wanted to know how the light element was defined. They were told that as ‘abstract’ was the mantra of contemporary dance, the lighting helped to show a landscape and body without representing anything or any form.

The Attakalari Biennial festival not only made an effort to make Indian art in its classical form more reachable and popularise contemporary dance, but it also introduced an element called the conversations. A series of talks/discussions among the audience about various aspects of dance and its elements, mediated by the veterans of the art form, added an interesting dimension to the whole experience.
⊕

About Arun Patre 6 Articles
The author has not yet added any personal or biographical info to her or his author profile.

Martin Scorcese’s Hugo remembers a pioneer film-maker. The sweeping panoramas of Paris will also not be forgotten anytime soon.

“Land should be pooled not sub-divided continuously”

Mohan Rao, an urban planner tells Citizen Matters the real reasons for why so many Bengaluru layouts don’t have water supply and why buses are forced to run on 9-metre wide roads. He is clear about the solutions too.

With 124 entries from Bengaluru alone, the first ever Design for Giving contest had children from schools across the country designing solutions for India’s greatest challenges.