The Bruhat Bangalore Mahanagar Palike(BBMP) website now has the handbook of property tax and list of helpline centers (where one can go and pay the taxes). 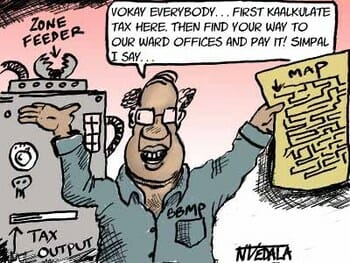 The Taxes can be paid at the Citizens Service Centre at the BBMP headquarters and the helpline centres (usually the ward offices in various locations) and specified banks.

BBMP has not provisioned for citizens paying at the Bangalore One centres. They explain that it is because people do not give correct details of their property. “Now we will check if all the details are fine and cheaters can be caught,” says Kandre, BBMP Public relations officer.

The forms are not available online and property owners need to collect the forms from the Revenue officers in various wards (the link to this is provided below) for a payment of five rupees. The payment of taxes has started from 10 February and the last date is 31 March.

However the unrest amongst citizens continues. Most of them who went to collect the forms and handbook from the BBMP head quarters this Tuesday could not get any copy due to shortage of forms. “The guy distributing had only 300 copies for the whole of Bangalore, this is ridiculous,” voiced out a member of Citizens Action Forum (CAF)

CAF organised a meeting held with city MLAs to discuss the anomalies of the recent property tax policy, on 11 Feb. Complaints and queries were put before the MLAs Dinesh Gundurao (INC) of Gandhi Nagar and KJ George (INC) of Sarvagna Nagar. Of the MLAs invited only two attended the meeting and there was no one from the ruling party to listen to the complaints and suggestions.

The discussion highlighted that under the new system as notified by the BBMP commissioner in more than 50 per cent of the cases, the increase in the tax burden is more than 20 per cent compared to what they were paying earlier. This is mainly due the zonal reclassification based on the guidance value of the particular area and the unjustified tampering of the depreciation allowance. Now property owners are made to pay between 4 to 11 per cent more than what they were paying earlier.

Citizens Action Forum (CAF) has sent a letter to the Chief Minister BS Yedyurappa and the city MLAs containing various suggestions including:

See article on how to calculate your tax amount.

When is it ok to use steroids?

Steroids get the attention for all the wrong reasons. But when used moderately and under doctor’s supervision, they can help save lives.

Will this action plan save Bengaluru’s lakes?

While 53 lakes have been converted into layouts, bus stops and other utilities 68 lakes are in a limbo. A quick look at the city’s lakes and what plans the government agencies have for them.