It’s not a great time to pick for an evening of theatre…. on a Wednesday evening. First, the traffic. Of all our theatre spaces, Chowdiah is the least well-connected by public transport. Leave alone not being close to any bus stop, it is not even convenient for auto-rickshaws.

So, one decides to drive, battling the guilt of using the car for only two people. And one realises that the ‘evening of leisure’ will not begin until the wretched having-cars-autos-and-two-wheelers-squeezing-past drive is over, as also the eternal hunt for that elusive El Dorado, the Parking Space.

It took us an hour and twenty minutes of nerve-racking driving to reach Chowdiah from our J P Nagar residence. But reach we finally did, and also found space to park! We then walked briskly for a quarter kilometre to Chowdiah, and entered on time, too, which had not looked possible at all while being stuck at various places along the way.

The evening was a fund-raiser for India Foundation for the Arts (IFA). Motley, the theatre group from Mumbai, was staging a set of three short stories of Ismat Khanum Chughtai, in a manner in which I would call ‘storytelling theatre’, very similar to the way we enact the stories that we tell our children.

Though it was a Wednesday, and in spite of the fact that IFA had refused to give out any passes, (since it was a fund-raiser), the hall was almost full. A lot of known and unknown faces thronged the hall, and I realised that people take theatre quite seriously…

The composition of the audience, of course, generally depends on what play is being staged, and the three playlets being in Urdu, one could see a largely Hindi-speaking audience. Certainly, the audience differed very much from the ones that I see when I go to a Kannada play at HN Kalakshetra or Ranga Shankara.

I spoke to several members of the audience, to get a feel of what brings the average Bangalorean out on a weekday to attend a play! 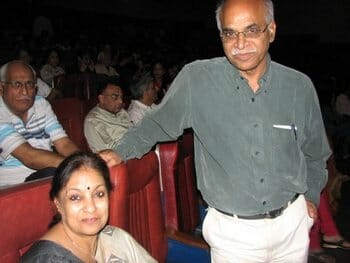 Manju and Manohar had come all the way from Indiranagar. “Naseeruddin Shah’s name was the magnet for us,” smiled Manju; “how could we resist, when it is him, Ratna and Heeba?” “We have been looking forward to an evening of excellent entertainment,” they both said.

Roopa Kumar and her friend came from Malleswaram. “For us, Chowdiah is very convenient, but we don’t have theatre as regularly here as Ranga Shankara does,” they both remarked. “But that is such a long way for us to go, so we come to Chowdiah when there is something interesting on.”

“What a wonderful evening of theatre!” exclaimed Tara, Kumar, and Kala, a family who had come along with Ravi Ramu of Purvankara Holdings, one of the main sponsors of the event. “This kind of talent and stagecraft is what we would willingly brave the traffic to come and see.”

“What I find difficult about Chowdiah is that even when I buy expensive tickets, I often find myself sitting behind rows of empty seats which should have been filled by various invitees, but isn’t,” grumbled one young woman, Latika. “It’s even worse when those who have bought lower-denomination passes are asked to come up in front to fill the gap,” chimed in her friend Murad. “Then those of us who have bought, say, Rs.1000 tickets just sit and watch as the Rs.500 patrons come and settle down in front of us. It’s so unfair!”

On that day, the ticket rates were a fairly expensive Rs.500, Rs.1000, and Rs. 2000. How do theatregoers feel about this? “Who on earth will shell out ‘two K’ for each ticket!” exclaimed Joseph, a young man from Marathahalli.” I have a bike, so I prefer going to Ranga Shankara always… they seem to remember that not everyone in Bangalore is very rich!” It was not IFA funds, but Naseeruddin Shah which brought him here, he said with a smile. “Yes, the fact that it is going to help artists and artisans helps me to be reconciled to the hole in my pocket,” he shrugs.

“Who wants to spend a lot of money watching an amateurish production from a young, green theatre group?” says Milind Bhat scornfully. But if one doesn’t encourage younger groups, how will theatre grow in Bangalore? “That’s not something I am going to bother about,” he shrugs. “I want value for money!”

This attitude perhaps explains why a Naseeruddin Shah production at Chowdiah draws a packed house in the middle of the week, and a show by a local group has about 40 people in the audience!

The canteen at Chowdiah is another major grouse for many, and one which does not seem to be getting any better. “Those samosas, those chips, and the twenty-five cups of tea that get over in the first ten minutes!” complains Shabnam, of Jayanagar. “Compare it with the great theatre cafe that Anju Sudarshan of Ranga Shankara runs, where, if you order your food before the show, it’s waiting piping hot afterwards…you can finish your dinner there and go home, or just sit over coffee and chat,” she says. “Why can’t Chowdiah, which is supposed to be one of the premier venues in Bangalore, have something better?” A lot of patrons were seen enjoying ‘chat’ items at the pushcarts just outside the main gate, as an alternative to the miserable canteen facilities

We were actually thinking that going back home after the show would take far less time than coming to it. Perish the thought! The narrow roads around Chowdiah and our indisciplined traffic ensured that there was an almighty traffic jam, and it took us more than forty minutes just to get to Bhashyam Circle. As our car idled away, I could not make up my mind whether the wonderful evening I had spent was worth this kind of wastage of time, energy and fuel.

And the theatre? Motley staged a superb story-telling theatre session of three short stories, filled with the evergreen wit, observation and compassion of Ismat Apa. Heeba and Ratna were excellent in their story telling, but Naseer had the audience eating out of his hand, and proved his class at his craft in every line of his story! They did not introduce the members of the crew, though, which I felt should have been done, as the music and the lights were both equally well-handled. ⊕

So you segregate waste, what happens next?

Waste segregation is the most discussed topic in the city. But BBMP’s does not pin down how exactly the collection will be carried out. Citizens have many questions.

Information about candidates standing for BBMP corporation election in Bengaluru, from the 198 wards. Updated with latest data as and when available.

People protest against BMRCL’s recent move to cut down trees at Lalbagh for its Metro project. Read all about the saga, proposed alternatives and the legal angle.