As a woman I have no country. As a woman my country is the whole world – Virginia Woolf

Meet Jyothi Ganesh, editor, publisher, writer, mother, wife, all rolled into one. From helping her maid get a recurring deposit in the nearby bank to sweetly coaxing her young neighbour to fit a silencer to his noisy bike, Jyothi believes in ‘doing and giving’. Founder-editor of Frazer Times, a community newspaper of areas in and around Frazer Town in north Bangalore, this woman runs the show single-handedly. Soft-spoken, passionate, endearing, patient, these are but a few words to describe this dreamer. Yes, a dreamer for a better Bangalore. 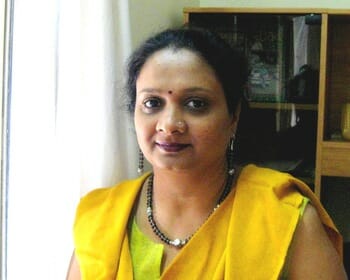 Born in Mangalore, Jyothi Ganesh moved to Kolkata where she did her graduation in commerce. She worked in companies like ITC and Union Carbide in fields like HR, taxation and administration. Though she dabbled in writing during her college days by contributing to the college magazine with her humour-filled pieces, she never really thought about a career in journalism. “In those days nobody really guided us about our careers. We just got into a job without thinking too much about it”, she says.

But after moving to Bangalore in 1998, everything changed for this mother of two. “I was really bored sitting at home those days. I used to read, but nothing beyond that”. As Jyothi was flipping through local newspapers, she realised they weren’t all that impressive and felt she could do a better job than them. And that started it all. She decided to start a community newspaper. After asking around about the procedure to start a newspaper, she applied to the Registrar of Newspapers and then forgot all about it. Jyothi had no hope of getting the nod for her dream and even started looking at doing other things. “I was thinking of starting an NGO or do something with regard to microfinance. I wanted to do a lot of things. But a month later, I received a letter from the Registrar approving my registration.” There was no looking back after that.

On 14th December 2003, the first edition of Frazer Times was brought out and has been so every fortnight thereafter. This four-page tabloid size newspaper is distributed free-of-cost. Jyothi says that they have a circulation of about 25,000 copies. They cover issues ranging from potholed roads to water supply irregularities to prominent personalities in the area are covered in the paper. With the help of a few freelancers, Jyothi manages most of the paper by herself. Be it knocking on doors for advertisements to distributing the paper, she does it all. And Frazer Times has helped her make a difference in her own little way, she says. “I want to help people be more aware and alert about the system. I want to get them to think. Frazer Times has touched so many people and it’s heartening to see the change”.

Apart from the regular stories on public grievances, Jyothi also writes from her personal experiences in the area. Be it inefficient service at the local bank or interrupted water supply at her residence, this super woman has the local authorities on their toes. Thanks to her, MLAs make regular visits to inspect the area and garbage clearance is now timely.

For someone who has very little time to herself, Jyothi says the satisfaction of seeing the paper completed is enough. “I get a lot of calls appreciating the effort. The paper has helped connect a lot of people. I have been able to create an identity for myself”. She also finds it disheartening when residents don’t turn up when meetings are organised with BBMP officials. That and typographical errors make her cringe.

Jyothi has always had a support system to bank on – her family and close friends. “My husband has been very supportive right from the start. He even helps me out once in a while.” On distribution days you can spot the duo at 4.30 AM handing out copies of Frazer Times to newspaper vendors. Her two teenage daughters, on the other hand, have not had a direct hand with the paper. “My elder daughter writes very well. She may write for us later. The younger one is good at poetry. But she hasn’t shown any of it to me”, she laughs.

Though Jyothi doesn’t really have too much free time, she does try catching up on reading books, magazines and watching TV. It’s the paper that keeps her going everyday.
Through the newspaper, she holds an annual programme on Children’s Day to bring together kids from various strata of society. Jyothi Ganesh says that Frazer Times isn’t a commercial venture for her. I am not making a living out of it, she says. It is the goodwill of people that has helped all through, she adds modestly.

Jyothi still has a lot of dreams for the paper. From improving government schools to highlighting bribe-seeking officials, Jyothi wants the media to be more proactive and hopes to achieve that. “I am very frustrated with the system. But I know I can do it because I have Frazer Times”. Ask her how she sees Bangalore ten years from now and she is quick to add, “I am a very positive person but I don’t see too many things improving in the city. Can the present government do something?”.

In the service of the terminally ill

Diseases like cancer affect individuals and their families in multiple ways requiring all round treatment. The city based Karunashraya is an organisation that provides palliative care to such people.

Who are the candidates in Govindaraj Nagar? How has the MLA performed in last five years? What are the problems in the constituency?

Prof Radhakrishna, a candidate for the upcoming Lok Sabha elections from Bangalore South, responded to questions from Smart Vote.