While all of Bangalore geared up for Valentines Day last week with all its finesse a café in Koramangala had something less obvious in mind. Brew Haha located near Jyothi Nivas College (Koramangala) in association with Muziboo.com introduced two upcoming Indie bands to its love-struck clientele and regular customers.

The warm ambience and eager crowd merged to create a welcome platform for the bands ‘River X’ which also goes by the name ‘Unknown River’ and ‘Grubby Halo”. 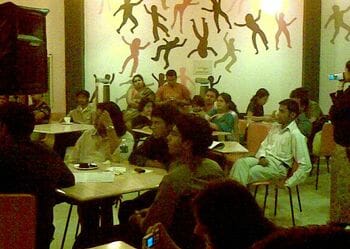 Watching the bands perform. Rochelle D’Silva shot this pic with her cellphone.

While all the customers were being accommodated the bands set up and conducted their respective sound checks fine tuning their vocals and instruments. The musical evening began with the 5-piece band (Shourya on lead guitar, Bipin on rhythm guitar, Zoheb on keyboards, Ashish on drums and Shubham on vocals) ‘River X’ who have been playing together for the last 3 years. The members of this band all hold day jobs in the sales and software sectors. They have been known to perform covers from Pink Floyd, Black Sabbath, Creed, Audioslave and many other such bands. In keeping with the theme of the day and also taking into account the limitations with regard to space, the band performed sans their drummer and keyboard player.

Setting their tone for the evening ‘River X’ chose to play soothing numbers showcasing their versatility by singing Hindi as well English songs ranging from the bluesy cover ‘Sea of Sorrow’ originally done by The Great Society which is a North-Eastern band from Shillong, ‘Pal’ by KK, the classic ‘Wonderful Tonight’ and their own compositions ‘Zindagi Se Bhari’ and ‘Can’t Live Without The Rainbows’.

Following ‘River X’ and wrapping up the evening, ‘Grubby Halo’ took to the stage and delivered a spirited performance. This band is made up of Arul on vocals and rhythm guitar, Bharath on keyboards, Vikram on lead guitar, Mudit on drums and Karan who was missing in action due to an injury on bass guitar. Holding regular jobs and pursuing professional careers this band’s members was formed virtually due to their shared passion for music through the popular social networking site Orkut.

Putting on quite a show, this Bangalore-based band played their own compositions like ‘New Man By Your Side’, ‘Killer’, ‘Love Remains’ and ‘Moody Drunkard Blues’.

The performance which was scheduled to take off at 7pm was delayed due to which many people ended up missing out. The lack of interaction between the bands and the audience which coupled with the bands performing their own compositions that many could not follow did cause some disconnect. While “River X” did play a few well-known numbers, “Grubby Halo” did not and the cozy Brew Haha space was not equipped for their forceful performance making the drums overpower the vocalist and compromising on their performance.

All said and done, in spite of the delayed start, Muziboo and Brew Haha accomplished what they set out to achieve which is create an unconventional musical Valentine while giving the local audience a sample of different musical sounds and aptitudes all rolled into one. ⊕

About Rochelle D'Silva 4 Articles
The author has not yet added any personal or biographical info to her or his author profile.
About News Desk 1120 Articles
The News Desk at Citizen Matters puts out Press Releases, notifications and curated information useful to the urban reader.
Website Facebook Instagram Twitter YouTube LinkedIn

Swarathma, landed in home town, Bengaluru to launch their second album ‘Topiwalleh’. The packed park was evidence to the Band’s popularity.

Active Bangalore is a programme that is broadcast every Thursday. In this episode, RJ Vijaya speaks with Yashaswini Sharma who shares some facts about the architecture of some of Bengaluru’s old temples like Old temples