Is this how other government schools are? Kannada ‘Model’ Primary School- irony or euphemism? In my minimal exposure to such schools, I’ve seen worse. This one has sufficient functioning infrastructure like building, rooms, ‘play’ground, furniture, teaching aids, washrooms and so on. But the lighting and/or ventilation in some of the classrooms is dangerously poor. And all have metallic furniture which is rusted and heavy. 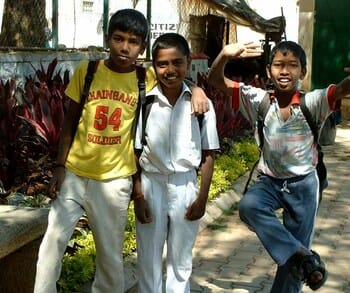 The computer lab which has 3-4 desktops, including one with a completely state-of-the-art flat screen, LCD monitor with a colour printer/scanner and interesting learning kits is always locked.

My repeated requests on the children’s behalf (thanks to Sandeep, Triveni and Sudarshan) have only helped us glance at the ‘haloed’ interior of this room. The reasons for locking vary from unavailability of the key to the probability of the students damaging the contents of the room.

Would children, who dread the very mention of their teachers, dare misbehave in their presence? Sensible adults who know even the least about computers would admit that a PC can’t be spoilt during a mere demo of the basics. So, is it the teachers’ ignorance and low motivation denying their students access to a mere exposure to an ubiquitous and exciting modern machine? Actually, I joined as a volunteer to train the teachers on computers so that they could pass the knowledge on but that never happened. But how and when did I start going there?

Well, I’d been considering it for a while since last October when my shoulder pain (due to which I had to take a break from my IT job) started easing and I was missing my volunteer activities, and, particularly my students in Byrasandra whom I’d tutored and mentored during weekends for nearly three years. Somehow, Barack Obama’s victory inspired and excited me enough to overcome my apprehension and procrastination – in nearly eight years of voluntary teaching, I’d been in a school environment only once before. Further, I thought a government school administration was too bureaucratic to accept an informal volunteer. But my husband’s encouragement and Mrs. D’s (a senior teacher) “We are always open to volunteers” motivated me enough.

If teachers including Sowbhagya and Zeenat were really keen on using the available IT resources and my experience, would they have let seven weeks pass without a single step in this direction? Are they simply demoralised, uninterested or preoccupied by the various academic, personal and other (election, census, et cetra) tasks that they are compelled to do? If not, would they spend part of the afternoon, on the days that they are present, having a leisurely lunch in the staff room? And that while most of the children are yelling and punching each other away inside their classrooms, even as Pushpalata, Surya and Suhasini are copying “questions and answers” from the blackboard, textbooks or classmates. Or Varsha, Murthy or Ramya are running errands for their teachers like fetching/cleaning lunch boxes or minding the younger children. Apparently, Sashikala and Varsha accompanied their teachers during the recent three-day child census without a break or any refreshments.

However, all the teachers are caring and dutiful, especially, while serving the noon meal, or if any student is ill or injured and lessons and co-curricular activities are due. Also, they insists on discipline, hygiene, courtesy and prayer regularly and are often willing to listen to Oblesh, Vijay or Divya expressing their excitement and understanding of something new or fascinating (like when I told them about the Chandrayaan launch or an animal’s inherent awareness and response to natural disasters).

Further, the principal Mrs D’Souza and other teachers like Savita usually ensure that the children are responsible for the order and cleanliness of their environs and wish well for victims of catastrophes like the Bihar floods or Mumbai terrorism. But they never hesitate to use rough sticks to strike their students hard while admonishing them severely. A few like Ramesh and Ramya cry while Arjun, Sudharshan and Karan brave it irrespective of whether they’re habituated or not!

So why do Arjun, Lata, Karan and Sharada seem incorrigibly inattentive and troublesome, although, nothing justifies corporal punishment? Is it a vicious cycle of violence and their belief that offence is the best defence? I have inquired – a trifle unsuccessfully. Obviously, some may not want to discuss their personal problems yet. For some, it must be nature or biology. Of course, while I’ve often told Sudharshan and Pushpalata (‘Paalkutty’ as she is called by her classmates) to ignore taunts by their schoolmates and that retaliation wouldn’t help, I’ve encouraged them to hit back rather than cry! Interestingly, provocation is maximum when one insults another’s family instead of the individual.

Some kids like the gifted artist, Michael, and the mischievious Karan, who dislike academics, but draw and sing splendidly while the sometimes rude Sudharshan, Ramesh and playful Triveni can study or sketch well if they want. Overall most children are very capable and keen on making something of themselves and are quite responsible with their younger siblings and family members. Some like Venkatesh and Surya further dream of helping ‘underprivileged’ people when they grow up…

Then, what drives Srikanth and Monika to abuse, kick and punch their schoolmates and others like Rahim, Lakshmi, Sumaiyya or Shalini to think, question and yearn to learn, more particularly, outside their prescribed curriculum? Are parents or older siblings compelling them to school or is it the usual attraction of the nutritious midday meal? Some children are first generation literates and a few, like Michael and Shashikala, live with only one or no parent and/or extended families. Commonly, adults are household workers, daily wage laborers (Shashi’s brothers), truck drivers (Vijay’s father), street vendors, et cetra. So, for the children (especially girls, who are burdened with domestic chores), are the seven hours at school an escape or an opportunity?

While all kids are quite conscious of caste, religion/faith, gender and class, peacemaking (Shashi has demonstrated this) and friendship are fast and blur these divides. Further, their enthusiasm, general and specific awareness, abilities including comprehension and memory and aspirations are inspiring and infectious. Most of them express themselves freely and love learning and discussing about various topics, particularly, those outside their books like wildlife, sport, society, et cetra. Young World’s variety, WWF and Reader’s Digest’s colourful publications on flora and fauna thrilled and engrossed us a lot more than basic Math, English and Science. Suhasini understands and tracks ISRO’s moon mission while the shy Venkatesh is curious about penguins on Animal Planet, implying that they care about things beyond cricket and ‘Sandalwood’. All this is in their native tongue – Telugu and Tamil, although they study in Kannada and learn English.

In fact, even the class IV and V students like little Shalini. The chirpy Monika told me quite candidly on Day 2 itself that I should not hesitate to converse in either language with them due to my limited knowledge of Kannada! But all the kids are ever ready to translate into Kannada, if necessary, thus, helping me increase my vocabulary.

Nevertheless, they are always keen on learning new English words and respond unhesitatingly when I urge them to recall spellings, meanings or pronunciation of known English words, using the vernacular equivalent, sound or picture clues. This particularly encourages Divya, Bharat, and Shivakumar to communicate openly, learn by themselves and from their mistakes and desist parroting the teacher. Further, they feel free to decide what subject or topic they prefer on a given day and are willing to let me alternate between classes, even though, they bargain for my time on other occasions.

Sometimes, Varsha and Triveni question why I choose another class over theirs, which I do at the behest of their teachers, usually.Although the men, whom the seemingly quiet Venkatesh requested not to dump garbage on the street, ridiculed him, he has promised to continue his awareness campaign, as we had decided during a class discussion on our responsibility towards environmental cleanliness.

Like their teachers, Shashikala and Murthy repeatedly suggest that spanking and thrashing their troublesome classmates hard is the only way to silence/control them. They also insist that trying to reason with the non-cooperative children or admonishing or punishing them mildly is pointless. Honestly, I am guilty of reporting the misbehaviour of some unyielding students to the teachers, resulting in prompt and harsh action by the latter, but they have rarely held it against me. Likewise, I frequently appreciate Michael’s talent, Monika and Murthy’s boundless energy and the undying thirst for knowledge that Divya, Oblesh (class V), Suhasini, Rebecca and Surya (class VII) show, much to the kids’ delight.

Small wonder that we have rediscovered ourselves and built a strong bond beyond the boundaries of the classroom. Mrs. D’Souza’s comment “they are waiting for you” on my second day there told me how quickly it happened… ⊕

BBMP latest garbage contract is filled with loopholes, like earlier ones. Bengaluru’s waste management mess is likely to remain a nightmare.

M Krishnappa, INC, won the 2008 Assembly elections from Vijayanagar beating former MLA and Minister V Somanna by a large margin. This real estate and land developer is a first time MLA. Learn more about his assets, performance and cases he has been involved in.

A PIL is ongoing in the High Court, that seeks to hold BBMP accountable for potholes. Send us details of potholes you know of, to help support this case