Bangalore is down in the dumps and its leaders and administrators seem to have abandoned their virtues and lost their will along with their sense of right. Looking at the current state of affairs, there appears to be no hope in sight unless the average citizen picks up the gauntlet. If the power of the Right to Information law is anything to go by, it is time for the common citizen to wake up and smell the kaapi. It may even be that the average Joe Bangalorean can redeem himself of the mess our leaders have created, and perhaps even turn into an everyday superman. 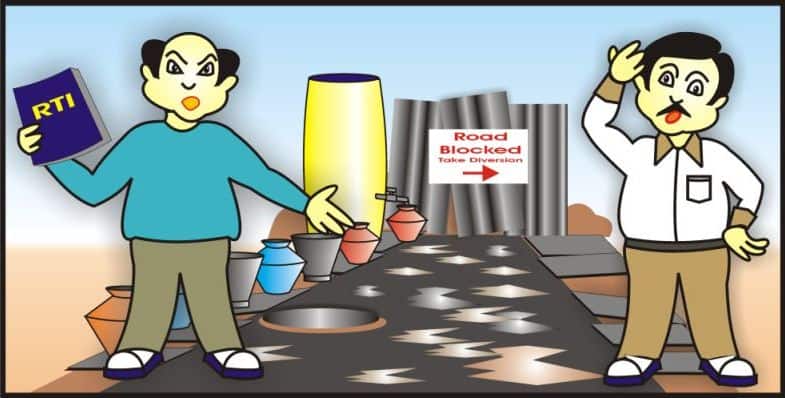 This article will show you how.

As a citizen, you have the right to know about how the government is going about improving your living conditions. The RTI Act entitles you to receive all the information you need from government departments and this is how you should get it:

From the documentation you have gathered, when you are convinced that something’s amiss, you can formally complain to the Commissioner of the Corporation or to the chief of the government department as the case may be, enclosing the evidence you have assembled using the RTI Act. Tell the official, in writing, to take action and rectify the damage done and take a time-commitment from him. Wait for him to rectify the shoddy work and to penalise the guilty officers.

If the top officials do not act, there are two steps you can take – approach the media. Along with unleashing the media, let us also add that it makes sense to tackle corruption in a group. You can form a group of like-minded citizens, and sure enough you will find many who are fed up with the civic infrastructure and amenities. With the evidence collected, you can complain to the top officials as a group.

Another option is to team up with city-based organisations that are active in the RTI arena – their list is provided in a box on this page. Whichever way, your goal is to ask the administration, using your evidence to take action.

As a final resort, you can also file a court case. Yes, this can mean even more precious time spent, in addition to all the time you may have spent in unearthing the evidence. Sometimes, this method works if the issue itself is broad and is impacting thousands of residents. Remember if a few residents welfare associations had not filed a litigation against the Sakrama law’s penalty clauses (which were holding citizens culpable and letting officials go scot free), the High Court may not have suspended the implementation of the penalties at all. Citizen action does help.

The RTI Act can really work wonders because government officials are aware that if their record of indulging in corruption is made public, then the past can prove to be their nemesis and come back to haunt them even after they retire. Consequently, in some cases, it has been observed that a mere filing of an RTI application has sets things right.

Rider: We have spoken mainly about the city corporation in this feature as it the major local body in the city dealing with citizens’ matters. However, you may use the RTI Act to obtain information from any government department – just refer the RTI Act online – with some exceptions in the area of Security and Intelligence operations. Refer to these links for more information: http://persmin.nic.in/RTI/WelcomeRTI.htm and http://rti.gov.in/

Beyond the type of probing described in part 1, if you still would like to know how to go about figuring cases of corruption, here are a few pointers:

Roads: There’s a science behind how potholes have to be filled, but in reality they are just stuffed with tar and patchily covered up. Similarly, there is a method behind building speed humps, which is not followed. The same goes for asphalting broken-down roads.

Ask for documents relating to road repairs and you are sure to find inflated estimates, high-quality materials requisitioned but low quality materials used, thickness of asphalting will not tally with that in the contract, unscientific methods used, etc. You will be able to unearth collusion between contractors and the BBMP officials, when it exists.

Parks: You will see substandard kiddies’ play equipment purchased at astronomical rates, uneven pathways, gazebos and artificial plants constructed at monstrous costs, and of course, you may come across small structures that will most likely be used for a purpose other than the one they were constructed for. You can ferret out all this information and act accordingly.

In reality, the wages paid range between 1,500 and 1,800, and PF/ESI contributions are not made. Check this with any garbage collector in your area. Additionally, contractors must provide safety equipment (boots, gloves, masks, full uniform, etc.) for the staff – but in many cases, what is actually provided just a coat and an ID card without a number.

Land Scams: Government land in area can be allotted for cultural activities, parks, educational institutes, and for sites to be distributed to specified people. In every area, there will be a few stray cases involving misuse of government land. Either the purpose for which the land is allotted will not be served or fictitious claimants will usurp sites. You will also come across residential property okayed for commercial purposes without any valid reasons and documentation.

These are some areas where you are sure to sniff out corruption and defects with ease.

In conclusion, you, the citizen, can become a catalyst of change by using the RTI law and working with other like-minded groups, and using the media to press your case. In the end, remember, our leaders are mere public servants – we have elected them so that can serve us. If we find them neglecting their work, then it’s time to take action and bring them to book. Good luck. ⊕

About News Desk 1053 Articles
The News Desk at Citizen Matters puts out Press Releases, notifications and curated information useful to the urban reader.