Strapped into the passenger seat on a motorised hang-glider, Aditi De glides across the city in the introductory pages of this absorbing set of tales of Bangalore. As you flip through the pages, you realise that she travels across different eras of the city – Bengaluru, Bangalore and back to Bengaluru. In an attempt to understand Bangalore’s identity, she has selected stories of its making during the Vijaynagar and Kempegowda reign, its growth during the Mysorean and Cantonment rule and its transformations from a post-independence literary era to the current Bengaluru. The anthology of stories by various literary figures describes to the reader not just their experiences about the city but also its growth, lifestyles and its ever changing identity.

Therefore, you witness a young Winston Churchill declare that the climate of Bangalore is excellent and "the roses of Europe attain the highest perfection of fragrance and colour" here. A city with "splendid roads", "endless double avenues of shady trees" and where the serious purpose of an officer was ‘Polo’ makes you long for such utopia in the present day city, notorious for its traffic jams. His era and the early twentieth century is captured in the photographic essay by Clare Arni. 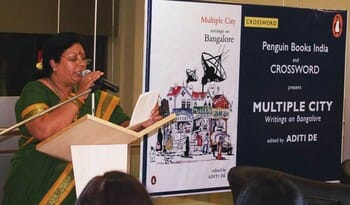 The city transformed into a space for intellectuals rather than just being a military cantonment after Independence. Janaki Nair explains, "Koshy’s became an important traffic junction for Marxists, socialists, aspiring writers and artists". However, the book is not just about the cantonment or "MG Road". Zac O’Yeah describes his experiences in the old city built by Kempegowda. Known by many names, old Bengaluru, Gandhinagar or more popularly Majestic, Zac describes the place as ‘high calorie version of civilization’ and where ‘everything appears to be in constant state of renewal, reconstruction and renovation. And like a magician pulling a bunny off the hat, he tells us about his unique shopping experiences in the Majestic area – buying an old Roman coin in one of Majestic’s back streets.

And from here we move on to try and discover Gandhibazaar, a literary hub of many Kannada writers such as Masti Venkatesha Iyengar, S Diwakar and P Lankesh. The book includes translated works of Kannada writers in an aim to bridge the Kannada and English divide. Just like Cantonment’s Koshy’s, Vidyarthi Bhavan served here as the meeting place to many literary discussions over piping hot dosas! Another article by U R Ananthamurthy tries to explain the city’s ‘back to Bengaluru’ identity.

While many stories tend to end in nostalgia from Ramachandra Guha’s Premier and Koshy’s world to Diwakar’s Gandhibazaar, there are a few stories like William Darymple’s Finger Lickin’ Bad. He narrates the resistance to social and cultural changes in the city through the examples of 1997 agitations against Kentucky Fast Food and Miss World Pagent. He explains in the book that "these events were actually warning shots across the bows of those who seek to turn India into a distant satrapie of Western capitalism".

However, we have moved on from the middle-class-morals mindset to become a metropolitan city. The IT sector has put us on the global map. There’s a section dedicated to this identity of the city like an excerpt from Thomas L Friedman ‘The World is Flat’. However, the story I liked best in this section is Sham Banerji’s Bit to Byte, wherein he delves into three different achievements of the city by giving examples of the scientist Rakesh Sharma, the artist Balan Nambiar and Dr Devi Shetty, the heart surgeon.

The book strives to explain that a city can have multiple identities. The different phases in Bangalore and their changing labels- pensioner’s paradise, garden city, pub city, silicon city – is captured effectively in the Paul Fernandes’ illustrations ‘The Morphing of Bangalore’. While almost all of the writers dissect the past, Ammu Joseph’s dreams of a Bangalore of the future – a city with good infrastructure, parks and gardens, an efficient public transport system and a great architecture – a future that is dreamt by every urban Indian resident.

The narrations are all fascinating to read. However, what I found lacking in this book were stories from Bangalore’s lower middle class – the slum dwellers, the neighbourhood condiment store owner, the flower seller – who have made the city their home and the experiences of the small but highly literate Anglo-Indian section of our society who have witnessed a huge change in their cantonment Bangalore. Still, this book goes a long way in enhancing our knowledge of the city.⊕

City Master plan: BDA must get the vision right

BDA which has begun the process of revision of Bengaluru’s Master Plan, needs to get a buy-in from all stakeholders on the vision of what Bangalore should be. They have to engage citizens in the process!