In the year 2008, discussion about power cuts was the talk of the town, among the city’s numerous other grouses. While everyone was affected by these outages, scheduled and unscheduled, and ranting about the same, Jayanagar Shopping Complex was least bothered to join the debate. Not because it never had these power cuts, but because it is suffering from the malady for the past 33 years. 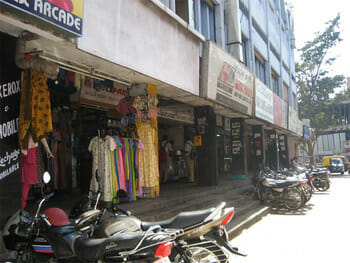 The well known Jayanagar IV Block Shopping Complex has been facing untimely and repeated power cuts since the time it came into existence 33 years ago. “We have at least four to six hours of power cuts everyday, if not more,” says Guruprasad, owner of the popular Nagasri Book Store in the complex. Nagasri is as old as the complex. Shop owners regularly face loss of business if there is power cut during the evenings, as people do not visit shops that do not have an inverter, adds Guruprasad. Most shops in the complex, except a few, have generators fitted to deal with this problem.

Manjunatha N, who runs the Amusement Centre, a playing centre for children with swings and stationary cars etc, says, “My shop is totally dependent on power, and these power cuts are very troublesome. I spend a huge amount on the generator’s fuel” This is echoed by several others, who have to run generators everyday for long hours. “This also adds to pollution because of the smoke and noise generated,” adds one of them.

Another shopkeeper Krishnamurthy who owns Music Paradise, a CD shop says that the power cuts are a menace to everybody. “We are charged commercial rates for electricity, but are not given uninterrupted power like shopping malls,” he adds angrily.

This nine-storeyed complex has a total of 300 shops and each hour of the day is a busy hour for this shopping complex. Shopkeepers are charged around Rs 6.5 per unit for the electricity, and have to shell out extra for the corridor lighting and lifts too. The complex does not get power from BESCOM but from BBMP. In a pact signed between the BBMP and the KEB (when the complex was built) the whole complex was considered as a single bazaar and the BBMP is supplying power since then.

The Assistant Engineer of BBMP for Jayanagar is aware of the problem but doesn’t have a solution for it. “The internal linings are such that now they cannot be changed. It was done when the building was built. Because of the faulty lining the complex faces troubles,” he explains. He adds that the shopkeepers have to pay commercial rates for electricity nevertheless, according to rules.

While the complex is reeling under these power outages all the time, the BBMP has gone ahead and announced a hike in the rents/ property tax of its tenants. The shopkeepers remain clueless about the reason for this hike. “The BBMP is not supposed to earn profits from a public utility building,” says Guruprasad of Nagasri Book store. The BBMP Public Relations Officer though explains that these changes are because of the new property tax calculation methods. But shopkeepers feel that their decades-old properties should not be taxed on present day rates, and are opposed to the move. This particular debate too remains unsolved.

While nobody is ready to find solutions for the existing problems, shopkeepers are trying hard to get their voices heard. This complex has become a part and parcel of the Jayanagar residents, and an important shopping destination even for those who do not live in Jayanagar. The complex has everything from book shops to garments to shoes and toys. When it comes to variety and range of prices, it is richer than any shopping mall, but sadly, is not accorded the importance and attention the latter commands. ⊕

Lalbagh flower show is here again, this time with a theme that might compel you to get out of Bengaluru and explore Karnataka!