Preparations for the Dassera festival start at least 3 months in advance at ‘Mani’, Banashankari II Stage, Bangalore. It would perhaps be more appropriate to say that preparations for the next year’s Dassera festival start even as the current year’s concludes. As Usha Madhuranathan, now 71, the prime mover behind Dassera arrangements at ‘Mani’, says, “It is as if our lives follow a calendar that starts with Dassera each year, not Ugadi or New Year.” 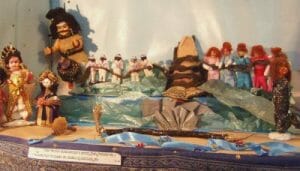 Churning of the ocean: Tableau for Dussehra (pic: Meera)

Passionate about arranging dolls, Usha has, in the past few years, taken on a personal agenda of educating people on various topics through Golu. Be it about how good the senior citizens of today were in the area of handicraft or demystifying the Lalitha Sahasranama or providing information on the Navagrahas.

Though she had been involved in the Dassera festival arrangements at her house right from childhood, Usha had first arranged dolls on a large scale in the year 1957 (when she was 21 years old) at her parents house in Bangalore. The theme was Dashavatara (the 10 incarnations of Lord Vishnu) and the Tirupati Hills. She used the traditional clay dolls that can be seen in almost all houses of Dassera celebrating-families in south India. This arrangement was different in the sense that it broke away from the traditional method of arranging dolls in steps. She instead displayed them in tableaux (drama style) that filled an entire room in the house.

From then on, there was no looking back. What started as a hobby soon turned into a passion. A passion that has not only touched her husband and children but also those who know her. For a long time now, nine out of ten gifts Usha has received on any occasion has been a doll or some related article!

Usha’s desire to arrange dolls during Dassera or Navarathri (as it is also known) has survived over four decades and three states. What’s more, she has not restricted herself to Indian culture and life for her choice of themes. While initially she was arranging the dolls mostly with typical themes like ‘Ramayana’, ‘park’, ‘school’, etc., her daughter starting nursery school inspired her to arrange the dolls in a manner in which the latter could relate to what her mother was doing. Thus she began to cast her canvas around nursery rhymes and fairy tales, with an ample dose of Indian mythology thrown in.

Over the years, Usha’s Dassera arrangements included various themes which could be broadly classified as Fiction (the fairy tales), Indian Tradition and Mythology (including important scenes from Bhagawatha, Maya Bazaar, various versions of Dashavatara, stories related to ‘Garva Bhanga’ or ‘Ego busting’, so to speak, of characters like Narada, Bheema and Yudishtira; Tirupati Brahmotsava, Festivals of India, etc.), and History & Literature (Moghul History, Sepoy Mutiny and famous musicians of India, to mention a few).

Around the turn of the century, Usha took a conscious decision that her work would now be dedicated towards educating & empowering people – triggering their interest to learn things that they would usually not think about. Keeping this in mind, she held an exhibition of hand-work of people who were over sixty years of age. The articles on display included intricate hand crochet work done during the pre-independence period, exquisite bead work (be it chariots, flower baskets, or the scene of Krishna and the gopikas – all in a bottle), seed necklaces, wood craft, knitted table clothes, hand made laces, etc. This display provoked the younger generations into acknowledging and appreciating their parents and grand parents for the dexterity displayed by the latter. The seniors too had a great time displaying their works while at the same time reminiscing about ‘those days…’!

2004 saw Usha showcasing a few names from the Lalitha Sahasranama with the intention of demystifying the Sahasranama and actually getting people to understand what these names indicated. The Lalitha Sahasranama has in it details of how a child develops in its mother’s womb in the initial seven months from the time it is conceived and what diet the expectant mother should have during this period! A range of ideas are expressed here — the way a person can lead his / her life, that discipline is essential in one’s life, that thoughts, actions and words are to be co-related to each other for a person to live a life of integrity.

Usha dedicated 2005 to providing information about the ancient Indian system of Astrology. The origin of each of the Navagrahas – the nine planets that are supposed to rule the destiny of each living being (and inanimate objects too!) on this planet – as per mythology, was depicted. Information on various factors associated with each planet including the colour, the precious gem, the food grain, the mount, etc. were presented. Also included were information on the 27 Nakshatras or constellations and a few other aspects of Jyothishastra. Usha’s intention was to showcase the richness in knowledge that existed thousands of years ago and how accurate Indians have been in finding out how various celestial bodies moved across the galaxy without any ‘modern’ instruments! For after all, Indians have been experts in the field of Astronomy and Mathematics for over 3000 years now!

The Venkatesha Suprabhata Seva was the theme for 2006. A simple set of shlokas that contain in them various facets of daily life, nature, cosmos and of course the beauty of Tirupati – the abode of Lord Venkateshwara on this earth.

What’s in store for 2007? This year’s theme is the Shodasaha Samskara – the 16 rituals a person is expected to go through from the time of conception till family life (Gruhastashrama). Usha’s idea is to present a way of life to people that has long since been forgotten – a way of life that gave Indians some of its greatest scientists, authors and warriors. Not to mention artistes and administrators.

If you are wondering about how many dolls Usha may need each year, the answer is: not many. For she has a set of about 100 dolls (be it plastic, wooden, mud, vinyl or cloth) which she dresses differently each year to suit the theme. She firmly believes that a lot of things can be created from ‘left over or waste’ material. All that is needed is a lot of patience, nimble fingers and a dose of creativity !

Story of a young veterinary student who joins the travelling circus, Water for Elephants is cinema that absorbs but does not haunt you.