If you have ever been on the Victorian Trail on MG Road or sent your child as part of a school trip on the Bangalore walks Jr, you will know Roopa Pai. Roopa and Arun Pai conceptualised and executed ‘Bangalore Walks’, the heritage-based city walks that introduces both Bangaloreans and tourists to the history and culture of Bangalore. 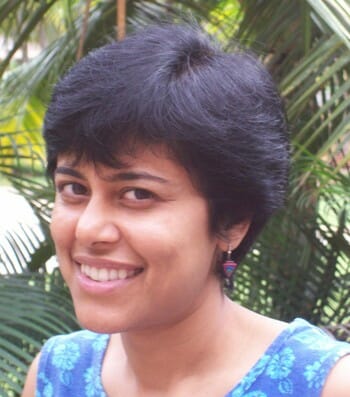 Roopa is a third generation Bangalorean, an integral part of the walks and also a veteran writer. She has written several articles for magazines as varied as Business Today to Travel Trends. She has been awarded by Children Book Trust for science writing and the Marriott award in the travel genre. It seemed only natural that she authored Ticket Bengaluru, a first-of-its-kind guidebook to Bangalore; even the Lonely Planet publications do not have a book on the city.

Friendly, articulate and easygoing, Roopa explained that, though, she specialises in travel and food, her passion is writing for children. Dressed in jeans and kurta and sporting short hair, she looks 25 years old. I was amazed to learn that she was one of the core team of Target, a popular magazine that many kids grew up with in the eighties. This interview with her discusses a wide range of topics that covers her travels, career, Bengaluru heritage and her upcoming projects.

Congrats on the book publication. How long did it take for you to finish the book?

Thanks. I worked for the book for almost a year. I enjoyed my experience with it. I have been writing about Bangalore for as long as I can remember; so when Stark World wanted me to write a guidebook on the city, it was right up my alley.

Can you tell us more about yourself? When did you take up writing as a career? Have you always been a travel writer?

I first started writing during my 11th standard. I wrote for the middles in Deccan Herald back then. Though, I completed Engineering to appease my parents, I have always wanted to write. After my marriage, we moved to Delhi; that’s when I started writing for Target. I enjoyed those days and writing for children is what I’ve loved best. When Arun and I shifted base to London, I was very eager to start work. In those days, London had very few cyber centers and I ended up paying £ 20 just to type out my resume! In the first week of landing in UK, I managed to get an assignment to cover the Indian restaurants in London from Travel Trends. During this stint, I discovered not just the restaurants, but also the city and, of course, travelling through the London tubes! My talks with Meena Pathak (of Pathak Masala), Namitha Punjabi and others of the food industry revealed the extent to which Indian food had penetrated the UK market. This fact materialised into an article for Business Today titled ‘Reverse Colonization’. I was also commissioned by the British Tourism Authority (BTA) to cover the hotels and accommodation across the UK for Indian tourists. One assignment led to another and that’s how my career took off. Currently, however, I’ve cut down and write now only for Travel and Leisure.

About your book publications…

I have written a book titled Chanakya in the Charitravali series published by Rupa & Co. I have also written a series of children books titled Sister, Sister published by Pratham. It starts with a question from a kid brother to his older sister (didi). For example, ‘Sister, Sister, why is the sky so blue?’ and he tries to provide answers from his own imagination. In the end, the sister gives him the real explanation. It is a beautiful series and I enjoyed writing it. Ticket Bengaluru was completed by January 2007. I’m now working on a fiction story; eight chapters of which are completed.

Travel writers usually don’t enjoy writing guidebooks. Many acclaimed writers say that it is a thankless job which involves a lot of research and they usually aren’t paid well. What’s your take on this?

I do not feel that way. As I said, Bangalore has always been my favourite city and I enjoyed writing a book about my city. Ticket Bengaluru is the first of a series that has been planned by the publishers. The fact that it took an extraordinarily long time to come to the market after its completion was, at times, frustrating. However, I had complete creative freedom in its structure, the content and making. So, I have no complaints.

You came to Bangalore after a long stint abroad. Can you tell us about your city experiences during the writing of this book?

I cannot recall any particular incidents but I can tell you that coming back to Bangalore’s laidback culture is something I’ve always enjoyed. My experience with Delhi taxi drivers had built up an innate aggression which I initially showed on auto drivers here. But their hurt expression at the unusual aggression and their tendency to gladly share their personal stories with a total stranger like me soothed my nerves and I ended up giving them magnanimous tips.

Coming back to Bangalore after a long time, I saw that the city has also changed a lot. You know, one can live in Bangalore without knowing much about the city. This could be both good and bad. I am especially known among my friends as someone who waves Brand Bangalore in the faces of ignorant ones. I know of a Bengali friend who complained that Bangalore does not have as much of a cultural background as Kolkata! Well, she stands corrected now.

Any particulars sections of the book you have enjoyed writing?

Well, since I had total creative freedom in conceptualization of the book, I loved doing every bit of it. However, some sections that are extra special include ‘Top Ten Bangalore’, ‘A Bangalore state of mind’, ‘Spa Speak’, ‘What they say and what they mean’, ‘Custom Walks’ and ‘Days Out’. Some of my suggestions that were used in the book are – starting the books with photographs, colour coding the sections and classifying the Days Out section.

Yes, it’s sad that we do not conserve our heritage. Having said that, I think any cause should have public support or government’s backing. We protest much louder if a tree is cut down than when a heritage building falls – unless it is as famous a building as Attara Kacheri. This might be because heritage conservation is very much a Western concept rather than Indian. The Asian concept of building and rebuilding is a cyclical process. Also, to preserve the city’s heritage, the government should buy it off the owners at the market price and step up the conservation process. Why will the owner have the interest to find the right tiles, find the right wood, et cetra, when he does not have any money to preserve his place? Until the government intervenes, we cannot preserve our heritage.

Will there be a Ticket Mysore or any other city guidebook authored by you?

No. I’m too busy with the Walks right now.

Thanks for your time, Roopa, and congrats once again.

For details on the Bangalore Walks, visit www.bangalorewalks.com

Getting ready for the big school

The first step into an unknown environment can be intimidating. Here are some tips on helping your child making the transition from playhome to school this season.

Giving your time to make life a little bit easier for someone else is a happy experience. A dentist shares her experience of a camp for special kids.