This sounds alarming, but this is what they are supposed when the radioactive material (used for treatment) is ‘fully used’. On matters of radioactive waste disposal, cancer hospitals in India are governed by guidelines issued by the Atomic Energy Regulatory Board (AERB). According to radiotherapy physicists (doctors), once the radioactive material is fully used (or spent) and decayed, it does not remain harmful. 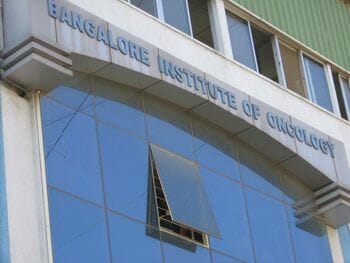 Bangalore has over a dozen cancer hospitals. BIO one of the leading private institutions, is located just off of K H Road, between Lalbagh and Richmond’s Circle. Pic: author.

Still, doubts remain about the impact of heavy metals like Uranium that are present in the radioactive materials. Dr M V Ramana, a Bangalore-based expert in this field, feels that in the long run, this heavy metal can be troublesome to the city’s groundwater.

My inquiry into Bengaluru’s cancer hospitals got triggered when I read an article about radioactive waste not being disposed off properly in the United States; the article said that the waste was further used by anti-social elements to make bombs!

Radiation therapy, where radioactive materials are used, is a common type of treatment for many cancers. There are more than a dozen cancer hospitals in Bangalore, which itself came as a suprise to me. I had never heard of these, barring a few well known ones.

The first thing to understand: what exactly is radioactive waste, where does it come from and how is this waste more hazardous than other hospital waste. I talked to doctors and specialists in radioactive waste disposals at Kidwai Memorial Institute of Oncology, Bangalore Instutite of Oncology, Sagar Apollo Hospital, Karnataka Cancer Society, and Vaidehi Institute of Medical Sciences and Research Centre.

This may surprise you, but radioactive waste does not come in torn plastic bags or bloody cotton wipes, saline bottles, expired tablets and all the usual things that come to mind when one thinks of hospital waste. The treatment is given through radioactive isotopes by two different therapies: radiotherapy and nuclear medicine therapy.

In radiotherapy, a patient is exposed to these radiations (the amount and time of exposure is also fixed and depends from patient to patient). Thus, no waste is produced in this process itself. The radioactive rays come from a material called isotopes and once they are used for exposure to the patients these isotopes die out. The storing of these isotopes is done with special care and it is made sure that no one is inadvertently exposed to these radiations.

The treatment further intensifies into the next step of nuclear medicine therapy. In this, the patient is injected with a radioactive substance. The injecting is also done in a very careful manner, wherein, no one else, other than the patient is exposed to the radiation. No one comes into contact with the syringes. The syringes are disposed off in a double layered disposal box immediately after the treatment. The first layer of the box is of concrete and the inner layer of lead. This box is placed very next to the injection area and no one (not even the patient) gets exposed to the material.

Dr Ramesh S Billimagga, Director-Medical of Bangalore Institute of Oncology, explained the process further. He said that the radioactive wastes generated during radiotherapy generally is in the form of solid or liquid and mainly result from the remains of administered radioactivity, patient’s excretions, vomitus, contaminated laundry, contaminated syringes, needles, vials, gloves, contaminated accesories and so on.

“The three main practices of radioactive waste disposal are: delay and decay; dilution and dispersion; concentration and containment,” he says.

A large amount of waste is disposed through urination by the patient in the first 48 hours following the therapy. Hence the patient is instructed to flush the toilet three or four times after use. “The effluents originating from the isolation room are never released directly to public sewarage as the activity concentration in the effluent will be very high and there is always a possibility of contamination or exposure to the public resulting from such releases,” says Billimagga.

AERB and it’s guidelines for hospitals

Billimagga further explained the norms set by the AERB, in accordance to which, waste can be disposed in public domain. The AERB is the governing body for authorised use of radioactive material in hospitals. The AERB has laid down mandatory guidelines which describe the method for disposing off these wastes, the way in which it should be stored, etc.

The AERB is supported by the Health Safety & Environment Group of Bhabha Atomic Research Centre(BARC), Mumbai. BARC acts as the primary agency for implementation of radiation protection and safety. It also provides training to technical staff at hospitals nationwide. All the cancer hospitals have a radiation safety officer (RSO) trained by BARC. This officer is supposed to send quarterly reports to AERB about the waste disposal status at the hospital. At the same time, there are surprise inspections conducted by AERB inspectors to ensure if the disposal is done in the required manner.

According to the AERB, radioactive effluents must be soluble or dispersible in water and concentration and total quantity of the liquid waste disposed should not exceed set limits. The AERB rules mention that ideally all effluents from the isotopes used to treat patients should be collected in a purpose-built delay tank. The entire drainage system of the isolation room should be directly connected to the delay tank. The plumbing lines should have minimum number of bends and should be connected to the tank through the shortest possible stretch. The plumbing lines should be of non-corrosive material like PVC.

Further, the delay tank should have sufficient sheilding and fencing and should be absolutely leak proof in order to avoid contamination of the soil and ground water. Inside the tank, the effluents, in addition to dilution, also undergo radioactive decay and then finally released into the main sewarage at an activity concentration less than the limit specified by AERB.

Radiology Safety Officer (RSO) is the person to be contacted in case anyone observes faults in the radioactive waste disposal. All cancer hospitals must have RSOs to comply with AERB rules.

There are also some solid radioactive wastes. These may be buried in pits locally. An exclusive burial ground for the solid radioactive waste should be located in an isolated area, which is duly fenced off. No one is allowed to go near these places because of safety reasons. The AERB has mentioned specifically mentioned in its guidelines that only the Radiological Safety Officer(RSO) and his required staff can only go near that area. The AERB gives specific guidelines to the RSOs at cancer hospitals on ground burial of solid wastes, which change from time to time, say the RSOs.

Because of presence of radioactivity in the salivary secretions, eating untensils may get contaminated during use by the patient. The patient should preferably use disposable type of utensils. If not, then should be instructed to wash the utensils thoroughly with soap and water after every meal. However, such utensils must be monitored and decontaminated before any reuse. In addition to the routes viz., urine and saliva, the isotopes are also secreted in sweat. As a result, the patients clothing, bed linen, etc get heavily contaminated and such laundry should not be released for washing. It should be collected as radioactive waste.

On this Billimagga explains, “In a center like ours where several patients are being treated routinely, it may not be feasible to dispose of contaminated clothings. Instead the procedure adopted is packing such laundry in a polythene bag and storing it in radioactive waste storage room for a period of upto 3 months by which the time almost 10 half lives are over and the radioactivity has decayed to negligible levels. After confirming by contamination monitoring that there is no radioactivity present, these clothings then are released for washing.”

The vapourous activity generated during radiotherapy is exhausted through the fume hood and the radioactivity is trapped using an activated charcoal filter system.

Dr M Kallur, Nuclear Medicine Specialist of BIO said, “No hospital can afford to disobey the rules set by AERB. The whole process costs crores of rupees. If even one fault is found during a surprise inspection of AERB, the hospital will be asked to stop everything.” Similar was the concern of Dr C K A N Shastri, RSO of Karnataka Cancer Society. This hospital also takes due care in disposing of the wastes.

So as prescribed by AERB, all the hospitals visited dispose of the used syringes, other liquid waste into the public garbage or public sewarage. And according to all the RSOs and doctors I met this public disposal is done once the radioactive material is totally dead.

Dr M V Ramana, physicist, is a senior fellow at the Centre for Interdisciplinary Studies in Environment and Development, Bangalore. His expertise is in the Indian nuclear weapons and energy programs, disarmament, and the storage and disposition of nuclear materials. He says that even if radioactive waste material is considered ‘dead’, it is never totally decayed there are some affects.

Ramana points out that that there are various kinds of radioactive wastes – high level, intermediate level and low level. The first two are not released to the environment. The last one is released into the environment either in the way of gasses or as liquid. These have sufficiently low radioactivity therefore they cause no harm.

“But these wastes if disposed off before their radioactivity decays can be hazardous. A lot of times through flies that come from the public garbage and sit on the food can bring radioactive components with them. Smilarly all the radioactive waste buried under the ground sooner or later erodes into the ground water and contaminates it. The effects may not be immediate but in around 100 years or so they pose danger,” says Ramana.

Even for waste disposed off after the material has decayed, people living at a distance of 10 to 100 feet who will drink this water will be affected in the long run, says Ramana. He adds that radioactive effluents have different reactions on different bodies. “The Uranium that is present the in radioactive waste which goes inside the body through drinking water mostly is excreted. But in some people it can concentrate in the bones or pancreas posing long term threat. There will not be any immediate affects but later this might result in causing cancer. As Uranium is a heavy metal it can also cause kidney failures,” he says.

He remembered a classic case that happened sometime back in Brazil. There was a rumour that radioactive waste from the hospitals is magical and it gives light if we dab it on the skin. It caused poisoning of a number of rag pickers that time.

Ramana’s key observation that even after following AERB guidelines, the threat of contaminated ground water remains, may not be dismissable so easily. C D Kumar, Environmental Officer of the Karnataka State Pollution Control Board when contacted shrugged his shoulders saying that disposing of radioactive material was directly controlled by AERB.

In the meantime, doctors at the city’s cancer hospitals attest that they are using the best possible ways to dispose of radioactive waste, as per AERB guidelines. ⊕

Lakes Bengaluru swallowed up for development

53 lakes were converted into residential layouts, bus stops and stadiums. 44 have been on record.

Charged separately for car parking by the builders? You might want to read this!