Corrupt government officials who have actively abetted illegal constructions in the city should be taken to task before any action can be taken against owners of such properties. This was the common refrain among citizens of the city who met under the aegis of the Citizens’ Action Forum (CAF) on 24 January 2008 to discuss, debate and arrive at a consensus on issues arising out of the amendment to the Karnataka Town and Country Planning Act. The amendment is known as the Sakrama scheme. 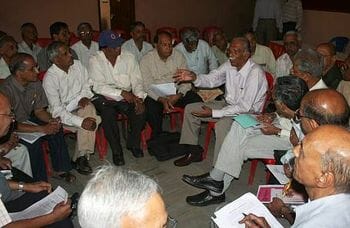 The group discussing Setback and FAR violations at the CAF Forum on Sakrama. Pic: Samuel Jacob.

Over 300 representatives from 175 citizens’ associations and resident welfare associations (RWAs) of Bangalore city participated in a one-day workshop on "Sakrama – What Next" organized by the CAF last week. See summary of recommendations here.

A prime issue for the city

The Sakrama scheme is one of the prime issues agitating RWAs, as was evident from the participation. It was a working day, and yet most representatives sat through the entire session. "So many people have come here and sat through the session. This should not go waste," a senior citizen voiced aloud this expectation at the end of the session. His appeal was received with a resounding applause.

Clearly citizens are feeling the heat of being hemmed in by the breakdown of civic administration on one hand and greedy officials and developers on the other, who will leave no stone unturned to squeeze the maximum revenue out of people.

The resolutions of this meeting are to be placed before the Governor of Karnataka and various political parties so that they can incorporate these in any new law that may replace the existing Sakrama law. It would also form part of the submissions before the High Court which is in the process of hearing a public interest litigation against the Sakrama law.

It may be recalled that the Sakrama law was passed in September last year to deal with illegal constructions and development in Bangalore and other cities of the state. The penalty clause of the law was subsequently "stayed till further orders" by the Karnataka High Court on 11 Dec 2007, on petitions filed against it by citizens’ groups. The next hearing is scheduled for 6 Feb this year.

The 24 January meeting centered around five topics of discussion with respect to the Sakrama law: Legal and Ethical position, Setback and FAR violations, Zoning Regulations, Urban Poor and Violations in Apartments.

Explaining the role of CAF in initiating the debate and to arrive at a consensus over this controversial legislation, President of the CAF, N S Mukunda, said that over 635 associations representing various citizens’ interest groups were contacted for this meeting of which about 175 responded. Clearly, some of them are still to be moved by the impact this legislation could have on the city and their lives.

As to be expected in any democratic process, there were moments of acrimonious debate on points of who should be penalised and how much. Narayanswamy from Basaveshwara Nagar said that municipal officials should be strictly dealt with. "If there are so many violations in the city then even the commissioner is responsible," he said.

Ranganathan from Pai Layout lamented that there was no enforcement of the law. Narayanan from R T Nagar disagreed that the penalties should be reduced. "Penalties should be a deterrent," he said. Sreenivas Murthy from Malleshwaram Senior Citizens’ Forum charged that the building bye-laws are not applied to government buildings itself.

Ramachandran from Indira Nagar said applying Sakrama one-time across the city is not acceptable. "Go stage by stage. Commercial activities in residential areas should be first curbed. Many builders have even grabbed footpaths," he alleged.

Karveer from Kalyani Nagar felt that the authorities should not be given a free hand in identifying the violations since they were themselves involved in perpetrating the violations. Raghvendra of SBI Officers Welfare Association said that wherever violations affected neighbors, they should be demolished.

The group discussing SET back and FAR violations witnessed heated debates on issues of legalities and illegalities of constructions. Participants in this group pointed out that despite having documents from various govt. authorities, their layouts were being deemed illegal. This was another trick to squeeze more money out of them, they charged. Laws are being made with the sole purpose of harassing the common man, they said. "Government officials should be punished," they demanded, pointing out that "the offenders cannot be sitting in judgment over citizens." 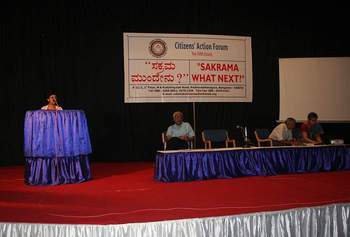 Opening the debate in the morning, Col Matthew Thomas, Secretary, CAF, presented a position paper on Sakrama outlining the topics for discussion. Highlighting the legal position he said the Sakrama scheme amends the Karnataka Town and Country Planning Act and therefore it has to be in consonance with the objectives of the Act.

The key objectives of the Act were to:

An amendment to any Act cannot take away the very objectives for which the Act or Law was made in the first place, he observed.

Other issues that the Sakrama law throws up pertained to the "Rule of Law, principles of natural justice, equality before law, the right to life and reasonableness, arbitrariness and whimsicality in conferring the law," he said.

1) Keep the Sakrama law in abeyance till the Bangalore Mahanagara Palike can show it’s commitment towards stopping further illegalities from happening.

2) If a property has valid documents issued by any authority of the state like Khata, clearance certificates etc, there is no reason to call those constructions illegal.

3) All three parties to the illegalities i.e. govt. officials, builders/developers and owners should be penalized and not just owners as in the present case.

4) Distinction should be made between violations made for commercial/profiteering purposes and those made purely for residential or out of necessity.

5) Premises that are in violation and being used for commercial/profiteering purposes should be sealed. This will be in line with the Supreme Court directives in a similar case in Delhi.

6) Zoning regulations should be strictly implemented and only those commercial activities (22 in number) that are necessary as defined by the SC order in this regard, should be allowed in residential zones.

7) Those properties that have been converted from residential to commercial in violation of development rules should be reverted back to residential.

8) Any new law that the government wants to pass in this regard, should be placed before the public for 60 days before it is presented in the assembly. The current law was passed without any public discussion and despite the fact that it was sent back by the governor for reconsideration.

9) Builders and architects who are allowed to undertake construction should be registered under a Builders’ and Architects’ council which will act like self-regulatory bodies similar to the Medical Council.

10) Government should not approve building plans submitted by builders which include slum lands.

11) The current public-private partnership (PPP) schemes for slum redevelopment should be scrapped.

12) The gravity of violation and nature of offense must be considered in deciding quantum of penalty.

13) Deterrent penalties including imprisonment for serious violations should be provided for and made mandatory.

CAF has brought out a booklet on Sakrama which details a backgrounder for the law from a historical perspective and the more recent developments that led to passage of this law. The booklet points to a worrisome connection between the Master Plan 2015 (MP) approved in June 2007 and the Sakrama law which was passed in Feb 2007 and given effect from September 2007. For eg. since the new Master Plan dilutes zoning regulation and allows liberally for mixed zones, regularisation of such violations under the Sakrama law can be undertaken without violation of the plan.

It’s interesting to note that legislative action on both, the MP and the Sakrama law were triggered by a query from the High Court. (Download the booklet.)

So far, the Sakrama amendment has thrown up more questions than answers. Citizens are increasingly rallying against it. Even if the High Court does not strike it down, the assembly elections around the corner do provide citizens with an opportunity to seek from the would-be legislators a more sensible and lasting solution to the issues of illegal construction and urban planning. ⊕

Are you part of a group in your neighbourhood that is working towards the betterment of the area? Would you like to see your ideas through to fruition? Read on then…