We pay taxes and duties on just about everything – on our income, on purchase of capital assets such as property and cars, on services, and on our expenses. Part of the tax collection goes to the central government, and part to the state and local governments. A substantial portion of these funds is earmarked for spending on area development. This much we know.

In Bangalore, the reality is that city corporators work hand-in-glove with corporation officials (BBMP) and contractors to ensure that a good portion of the funds earmarked for development are milked back into their own pockets. Guru Ravindranath, a Banashankari resident, has been filing Right to Information (RTI) applications and unearthing instances of corruption in local public works. BBMP’s responses to his applications have helped trace the systematic nature of corruption and expose the visible signs that citizens must look out for.

It starts with the BBMP budget allocating funds towards each ward for local works, represented by an elected corporator. This money is merely allocated – it does not go into the hands of the corporator itself. Some you may already know that corporators have many contractor acquaintances. The corporator joins hands with BBMP officials and his preferred contractors to flush out citizens’ hard-earned money. The next step is to ensure that the preferred contractor gets all the work doled out by the BBMP.

If you have noticed any governmental apathy in your area, CAC and Guru Ravindranath will guide you in fixing things.

The corporator prepares a list of development works that need to be carried out in his ward. Commonsense says that citizens must be involved in this process. In most wards, they are not, and the exercise is based on guestimates. Some corporators pretend to involve citizens, but that is just eyewash, as citizens’ suggestions end up being trashed or exploited.

Anyway, the corporator prepares a list of works required and breaks down each development work into a contract of Rs.5 lakhs. The BBMP laws state that if a contract is worth Rs.5 lakhs or less, then it can be treated as piecework, and there is no need to call for a tender. This is what the corporator wants – he wants the job to go to his contractor acquaintance without subjecting him to any competition. 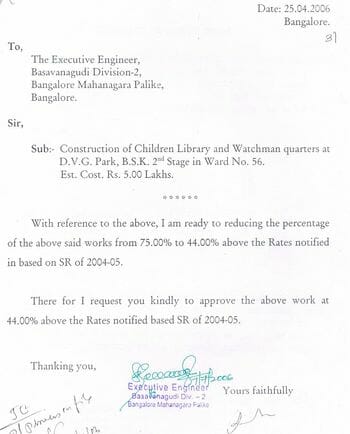 Letter written by a contractor to BMP officials agreeing to the 45 per cent escalation in rates. Source: RTI.

This is how a corporator tells the BBMP officials to break down contracts into the right size – if a park needs four pathways, then they are segregated as four different contracts (east, west, north, south); if potholes have to be filled on 10 roads in the same ward, then too the contracts are chopped up, and so on.

Note, as elected members of the city council, to whom the BBMP administration reports to, corporators do not sign any statements or tenders. They communicate verbally to BBMP officials on these matters. The BBMP officials ‘know’ that a particular contractor is a crony of the corporator and they pass the contract knowing well that the estimates are bloated and that the booty will be shared in the end.

If you can spare the time and demand documents from the BBMP, under the provisions of the RTI (Right To Information) Act, you will be surprised to see that nearly every area development contract approved by BBMP officials is Rs.5 lakhs or slightly below that.

Now, it is time for the officials to get into the act. They endorse the contract and award the job to the contractor, and the moneymaking game begins. The contractor has stuffed his estimates with a whole lot of redundant extras. For example, a former Health Minister sanctioned Rs. 5 lakhs from MLA’s fund to a ward to build a small 450-sft children’s library inside the DVG Park (Banashankari). The corporator and the BBMP connived and handed over the contract to a preferred contractor, whose estimate said that 5 metric tonnes of steel were required to construct this small, barebones 450-sft structure. Engineers from the BBMP passed this ridiculous estimate! Think about it – Rs. 5 lakhs for a small 450-sft building that could have been easily constructed for maximum Rs.3 lakhs!

As noted earlier, the corporators’ role is verbal, and the paper trail extracted from RTI applications only shows decisions being made by the BBMP to award works to contractors. I.e., the RTI findings do not offer legal proof of corporators influencing the works process.

As of now, the BBMP Council stands dissolved and there are no corporators. With elections imminent, another council will soon be in place, and the scams will start afresh with a new gusto, unless you plan to do something about them.

This building took shape in 2005-06, but the timeline is not the point. The point is that there will be countless such leakages in many spots in any suburb in Bangalore! If you have the inclination to figure out corruption in your area, then all you need to do is use the RTI Act.

Back to our story; after being awarded the contract, the contractor writes to the BBMP saying that the cost of materials has shot up and he is unable to execute the order unless they agree to an escalation – which is usually 50-75 per cent. The drama unfolds as per the script – the BBMP officials agrees with the contractor’s escalation, but negotiate with him just to keep on record the "sterling work" they have done. BBMP’s responses to RTI applications show this. The contractor brings down the escalation to a "reasonable" level – say about 45 per cent – and the work is completed, and payments made. Then it’s time to share the booty.

Here’s one little tidbit: You will be surprised to know that every park in Bangalore needs at least two watchmen manning the park 24/7. If you undertake a reality check, you will find that there are no watchmen in most parks. But, what you don’t know is that each estimate recommends 2 watchmen per park and the BBMP officials sanction them at a budget of Rs.6,000 per month per park – this work too is awarded to contractors! Bangalore has 132 parks, any guesses where this money goes?

Now, here’re the areas where the human and financial leakages happen –

(i) First, many works are not worth the average rate of Rs. 7 lakhs (contract of 5 lakhs + the escalation) per contract – my guesstimate is that it is worth about 2-3 lakhs at the most. About Rs.3-4 lakhs is overpaid to the contractor, who then passes on a good part of the money to the corporator, who in turn pays off the BBMP officials. In case of a labour contract, bogus employees are created and the contractor pockets their salaries.

(ii) The materials used are substandard, and there is no one to check their quality. Also, small-time job workers without professional supervision carry out the work.

(iii) There is no planning involved and scientific methods that must be put into use are given the go-by. Just look at the shoddy roads, parks and small BBMP structures around you and you will know what I mean.

(iv) Citizens who know best about what their locality needs the most are not consulted, or their suggestions are trashed.

(v) Finally, there are cases where small buildings have been constructed in parks and on BBMP grounds, which are used as an office for the corporator’s henchmen or for his other conveniences, rather than for the purpose they were constructed. Remember that 450-sft children’s library that was built inside DVG Park? Well, it was stealthily converted from children’s library to a senior citizen centre and was about to be converted to a local office of an unheard-of organisation before right-thinking citizen activist – Guru Ravindranath – stepped into the picture and put an end to it.

As noted earlier, the amount that is manipulated is unimaginable: Multiply 3-4 lakhs per contract into hundreds of contracts that are awarded every year and the number is mind-boggling! This is also how our citizens’ money gets distilled into black money. Black money gets generated when the contractor withdraws cash from his bank account and distributes it the corporator and the corporation’s officials. Of course, the cash withdrawn is shown as expense in the contractor’s books, as paid towards sundry labour, small materials, miscellaneous expenses, etc. Instead of being a servant of the public, the corporator becomes their master and stops at nothing to eat into their hard-earned money.

Is this how your money must be treated? Is this the kind of life you deserve? Should you fawn over the corporators and BBMP officials and allow them to lord over your area?

Well, the answer is a resounding NO. A number of citizens such as Guru Ravindranath have already shown that they are able to use the RTI law to check local corruption. Now, it’s your turn. ⊕

About Sunil Tinani 5 Articles
The author has not yet added any personal or biographical info to her or his author profile.

The BBMP will announce valuation rates for property in Bengaluru shortly, a senior official says. But, “I would like to get a property tax law that can be easily understood by the people,” says the head of a citizens’ forum.