Power cuts are again the talk of the town since Bangalore Electricity Supply Company (BESCOM) declared a minimum two hour cut in all the residential areas in the city. “Is it really only two hours?” is what my colleague Gayathri S asks me. She gets a power cut of six to eight hours every day since the declaration of power cut was done by BESCOM.

My colleague lives in Venkatapura, Koramangala. She complains of untimely power cut of more than six hours a day disturbing routines. When we checked, we found that she is not the only one suffering from this kind of power cuts. Residents of Anjananagar, Vidyaranyapura, Green Park Layout, ISRO Layout, Yelahanka, Hebbal, RT Nagar, Siddapura, Puttenahalli and Ramamurthynagar and more are also affected by long hours of irregular power cuts.

But all of us facing power cuts tend to rant about the inconveniences and stop there. This is because we do not know that in such cases we are entitled to get a refund of Rs.50 from BESCOM, according to the code set by the Karnataka Electricity Regulatory Commission (KERC).

The KERC is the Karnataka’s electricity regulator and monitors electricity supply companies throughout the state, including BESCOM. KERC makes certain guidelines, rules and codes which are mandatory to be followed by the companies. One of the clauses of the Grid Code of KERC, clause number 4.6.3(i), mentions that power cut of more than two hours in any part may be termed as a “Distribution System Failure” and is entitled to get a refund of Rs.50 from BESCOM. 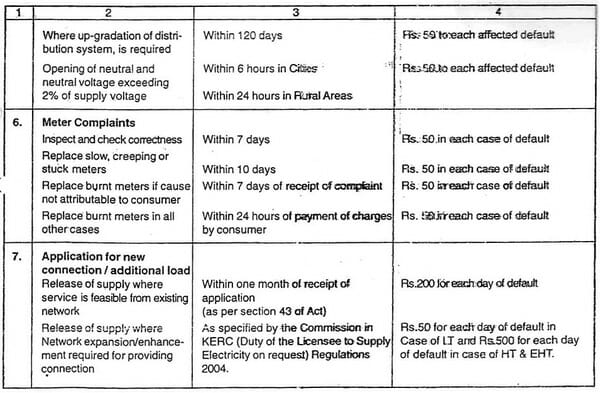 At the same time, the KERC has a table declaring the “Standards of Performance and Amount to be Paid for Default in each case.” This table clearly mentions that a refund of Rs.50 needs to be given for the following conditions also:

There are many more such conditions. Everyone can find at least one suiting his trouble.

One citizen who decided to pursue BESCOM for the statutory refund money is C H Ram, an RTI user from Koramangala. His area, ST Bed Layout saw a power cut of more than 20 hours on 29th April this year. Pained by the trouble, he filled an application with the Additional South Division, BESCOM in the month of May. The PIO for that office is B Krishnappa. Ram did not get a reply.

Ram then appealed to the Karnataka Information Commission. Ram is now waiting for the hearing scheduled for 1st December. “I hope at least there BESCOM reacts,” adds Ram.

Many of you may wonder why we should bother so much for a mere amount of Rs.50 per consumer. You may also wonder why Ram should fight so much over BESCOM’s silence on the matter.

But there lies the key: Rs.50 per person in a locality where thousands of homes are hit by outages and across several localities could very quickly add up to a large refund amount – crores of rupees — for BESCOM to shell out. If this is enforced, it could make BESCOM rethink or manage its affairs better.

Members of the Karnataka Electricity Regulatory Commission could not be reached for comment, despite repeated attempts.

Citizen Matters will track this story, and in the meantime, consumers, start marking the hours for which power is cut in your homes. ⊕

Roadwork in Akshayanagar unfinished for over a year

Though the signature campaign by Akshayanagar residents got BBMP to close the open drainages, the roadwork is still pending thanks to litigation.

Six awards in six years. The journey of local journalism has been incredible. We thank you for supporting us, by reading, giving feedback, contributing findings, data, articles and donating!

Children spoke out; but did anyone listen?

Children articulated major concerns in Bengaluru’s first ever Children’s Ward Sabha. But local politicians seemed to be pushing their own agenda.