At first glance, K Raja, 26, a resident of Bull Temple Road in Basavangudi and David Moszkowicz, 34, a native of Lyon, France would seem to have nothing in common. In fact, if one were to try and apply the six degrees of separation rule on these two individuals, it is quite a high possibility that, under normal circumstances, the number of links to connect them would be much greater than the standard six. 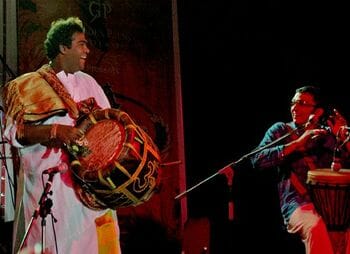 Raja the Tavil player engaged in a jugalbandi with Pavan Kumar at the New Year eve celebration. Pic: Shreya Dasgupta.

Mild mannered David looks every bit like the technical director that he is at a cartographic firm in Bangalore, which is helping in plotting the master plan of the entire city, including the various areas that come under greater Bangalore metropolitan area. He has been here for about six months now and like most outsiders who have embraced Bangalore with arms wide open, he too has developed a love-hate relationship with the city, for he loves the people, the culture and the food here, while having diametrically opposite feelings towards the mayhem and madness that is characterized by its traffic.

Well built and stocky, Raja is a native of Bangalore and plays the Tavil for a living. The Tavil, also known as the Dolu is a percussion instrument that accompanies the Nadaswaram in a musical performance and this combination of instruments is used while playing music at temples, processions, marriage functions and other auspicious occasions. Raja, who mastered the Tavil in Thanjavur for four years, plays for the Laya Taranga troupe as well as the Shri Kala Music Nadaswaram troupe.

I presume you’re still wondering what it is that they have in common, for they seem to come from different planets altogether.

It is the musical ties that bind them, in the form of the Bangalore-based fusion band, Swarathma. David is a saxophone player, who has been trained in jazz music when he’d originally picked up the instrument. He has subsequently experimented with various sounds such as reggae, rock and even some tribal music. Raja, as an exponent of the Tavil requires to have an impeccable sense of timing to keep in step with the music when working on complex rhythm patterns, while also having the stamina to play this instrument for an extended duration of time.

In conjunction with a performance that they had to put up for the New Year’s Eve celebrations at a popular resort on the outskirts of Bangalore, this band had brought together both David and Raja, as guest artists to share a common platform. It was a performance of Raja’s that Swarathma’s lead singer Vasu Dixit had witnessed that prompted the latter to bring Raja in for a couple of songs being played by the band. Vasu wanted to add a traditional touch to fast paced songs, to infuse a welcome change to popular tracks rendered by the band.

David Moszkowicz on the saxophone with Varun Murali on the guitars. Pic: Shreya Dasgupta.

David’s involvement, on the other hand was due to the fact that he’d known about the band through a common friend and had expressed his interest to play along with them. David was more than eager to jump at the opportunity to create some fusion music with Swarathma.

It was a grand performance, enjoyed by a three thousand strong crowd during which the band was able to showcase its musical prowess in its chosen field, while being able to highlight its two guest artists, who put up a performance par excellence. Swarathma’s music by itself is an eclectic blend of various genres such as rock, western and carnatic classical music, reggae and folk music.

David’s jazz and blues solos added a different dimension to a couple of songs – ‘Actor’ and ‘Khul Ja Re’ by transforming the atmosphere of the place and transporting the patrons at the venue into a different time and place, while Raja’s improvisations on the fast paced songs such as ‘Mauj Kare’ gave the songs that additional taste of south India that got the guests in the mood to dance the night away, traditional style.

"I am used to playing in small pubs and bars and have done so in places like Lyon, Touluse and Madrid, but jamming with Swarathma and playing in front of such a crowd is a different experience altogether", remarked David, whose parents and wife had also come to watch him perform.

On the other hand, Raja, dressed in a pure white silk shirt and a traditional mundu experienced a slight culture shock of sorts, by being part of such a gathering, but managed to acclimatise quickly to the occasion and had a grand time.

"I usually play for auspicious occasions and it is a nice opportunity to make people aware of our traditional instruments and the fact that they too can be important and relevant in today’s day and age", said a highly thrilled Raja.

Music knows no caste, creed, religion or nationality. Should that sound like a cliche that you would not like to subscribe to, the case of David from Lyon and Raja from our very own Bull Temple Road might just make you change your mind.

About Hari Shenoy 9 Articles
The author has not yet added any personal or biographical info to her or his author profile.

Who would need wide roads if thousands of people lose their houses because of that? Please think of alternatives with minimum damage to the public.

The Karnataka government has proposed a substantial hike in the fine for honking. Will this reign in the spectre of vehicular noise pollution? What other measures can reduce the deafening noise levels in our city?

Garbage project down the drain

It is disheartening to see a model eco-friendly waste management pilot project being nipped in the bud.