We have started a community participatory project aimed at reducing alarming noise pollution levels in Bangalore. We have arranged for an awareness campaign and press conference this Saturday and we would like to invite you for the same.

Street demo/campaign on Saturday, 15th November 2008: 10 AM to 11 AM near Cubbon Park at the Kasturba Road Signal (Jewels de Paragon)
Press conference from 12.30 PM to 1 PM at the Bangalore press club.

To all those who are planning to join us in our demo, we request that you bring a poster carrying slogans (a crisp and effective message) on noise pollution. These slogans were used in our first campaign, so you could come up with something different too.

Our primary goal is to reduce noise pollution levels caused by honking and autos/bikes that remove or tamper with their silencers. Our approach is to:

1) Build awareness on the harmful health effects of noise pollution amongst auto drivers and encourage them to fix their silencers.

2) Build awareness amongst schools (we need more volunteers to do this, so if you could let us know your interest, we would get back to you with more details), Bangalore residents and taxi drivers on the negative effects of noise pollution on general well-being and health.

3) Talk to regulatory authorities ( if anybody has contacts, please volunteer to go and talk to them. we would get back to you with more details on this aspect) to implement laws on noise pollution. 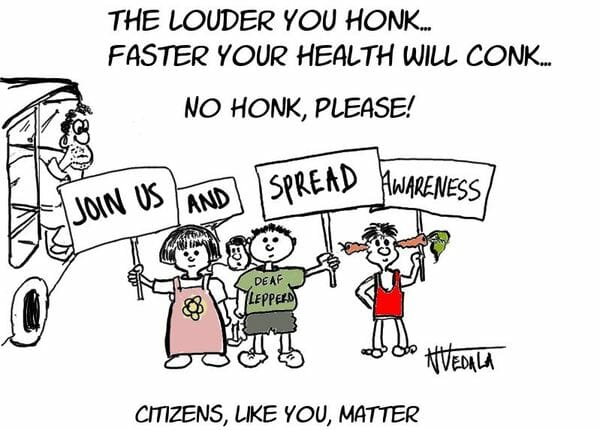 This is an opportunity for citizens of Bengaluru to make a difference. To make "Bengaluru – A Noise Free Zone". Those who are inspired may join the group mailing list.

I had outlined the idea of this campaign in an earlier article in Citizen Matters. The Times of India picked up on the story and published an article. My gratitude and special thanks to Citizen Matters.

Prior to Citizen Matters media mention, it wasn’t an easy job when I started out. I approached ‘Manipal, Command & Magdum Hospitals’ on Old Airport Road (Murugesh Palya). I was asked, "Are you from any NGO/organisation/R&D lab"? "What does it mean to you"? "Why are only you taking it up"? "Can you give any supporting letters"?

I wanted to do video interviews with children, teenagers, IT employees, government officials, auto drivers, bus drivers, travel services employees, senior citizens, traffic police etc. When I approached a few residents on Wind Tunnel Road in Murugesh Palya, 5th Cross area, they too asked, "What’s the profit to you"? "When the government and traffic police can’t do anything, how can you cause a change"? "Don’t you have work"? "I don’t have time for an interview"!…

It was daunting. But it was a way to learn how to be unreasonable, to stand up for the cause no matter what. I managed to interview five people. (Video clip links here)

Subsequently I wrote to many media publications – Citizen Matters, The Hindu, Deccan Herald, Deccan Chronicle, Times Of India, DNA, Bangalore Mirror, City Plus, etc. Citizen Matters has been positive and supportive from the beginning. The Hindu and TOI considered the cause and were looking for events to be hosted.

I did not have active and committed volunteers at the time to support the cause. Some people used to just listen and some others didn’t even bother to acknowledge or respond. There were also a few people who laughed and thought I must be crazy!

The Landmark education course I had taken up played a vital role in not giving up. That’s when my article was published here. That’s how the journey began and it continues.⊕

About Bala Venkata Sudhakara Reddy Vuyyuru 2 Articles
The author has not yet added any personal or biographical info to her or his author profile.

Sketching on a Sunday

Sketching enthusiasts get together with pencil and paint, in a jam session open to all, expert or novice.